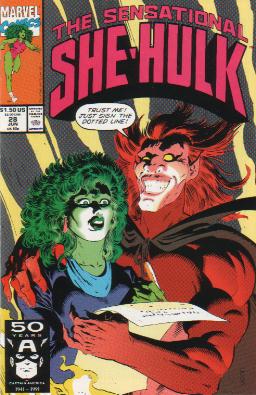 The punch-line of this story is completely derivative, and any suspense that might have been possible is destroyed by a cover that reveals Mephisto is in this book.

She Hulk finds herself in need of money to pay taxes and suddenly there’s temptation everywhere.  She signs a contract to produce merchandise of herself, but as the cover spoiled, Mephisto is behind it.

Then, to get out of it, she reveals nude pictures of herself, breaking the “morality clause.”  (Really?  A contract with the devil has a “no nudity” provision?)  The nudes are the same ones from Fantastic Four #275, which we all remember was ingenious because they were shot in black and white, thus eliminating the value of a green woman.  And also, you might remember, at the end of #275, Johnny Storm said he was going to go get some green-tinted glasses, so he could see the She-Hulk in the pictures.

He tells the same exact joke in this issue. I know comics by their nature tend to tell the same stories and feature the same, ageless characters, but this is truly excessive.