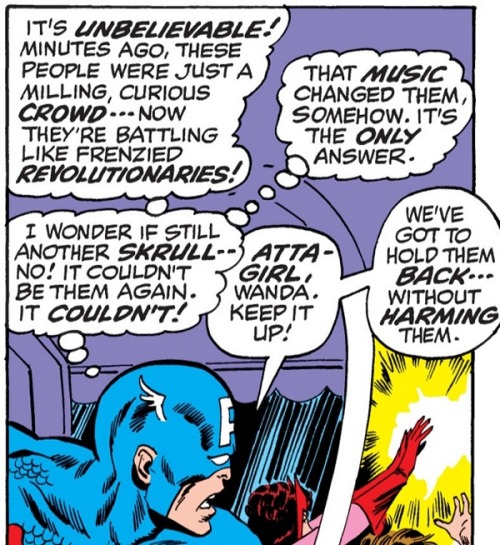 It starts with some mind control.  Then….

Clint Barton literally runs off and joins the circus, where he finds Hercules has amnesia, and is the strong man.

Marvel Comics seemed to be fans of switching heroes’ roles and costumes, at least in the pages of The Avengers.  But this one…Is awful.

From there, we get a three-issue romp through the Greek demi- and full-God pantheon.  Ares kidnaps Hercules, and just about anyone who ever was in the Avengers assembles to save him–including Hulk, even.

We also get more on the developing relationship between Wanda Maximoff and Vision.  And Quicksilver is not happy about it.

It’s kinda uncharacteristic for him to lower his head and suffer in silence, but I love how Barry Smith puts the slight shadow on Pietro’s face in the image above.

He’s not the only one who doesn’t like Wanda being interested in Vision.  Hawkeye doesn’t, either.  It’s why he left the team–after Vision expressed jealousy at catching Clint hitting on her…