More single stories from an anthology title that is made up of 2-3 multi-issue stories and 1-2 single-issue spots.  We’ll run through them quickly because the stories themselves are about 8 pages.

Issue #72 pits Red Wolf saving wolves from hunters (who hunts wolves?), and adopting an orphaned cub who will become his sidekick “Lobo.”  Created by Fabian Nicieza and Javier Saltares.  Nothing terrible here, but it’s yet-another story about Red Wolf that’s about the same as all the other ones.  Grade: C.

The one single-issue story in #73 is Black Knight, who, if you read my blog regularly, you know I despise.  Creators: Russell Lyman and Jason Balgobis.  Grade: D 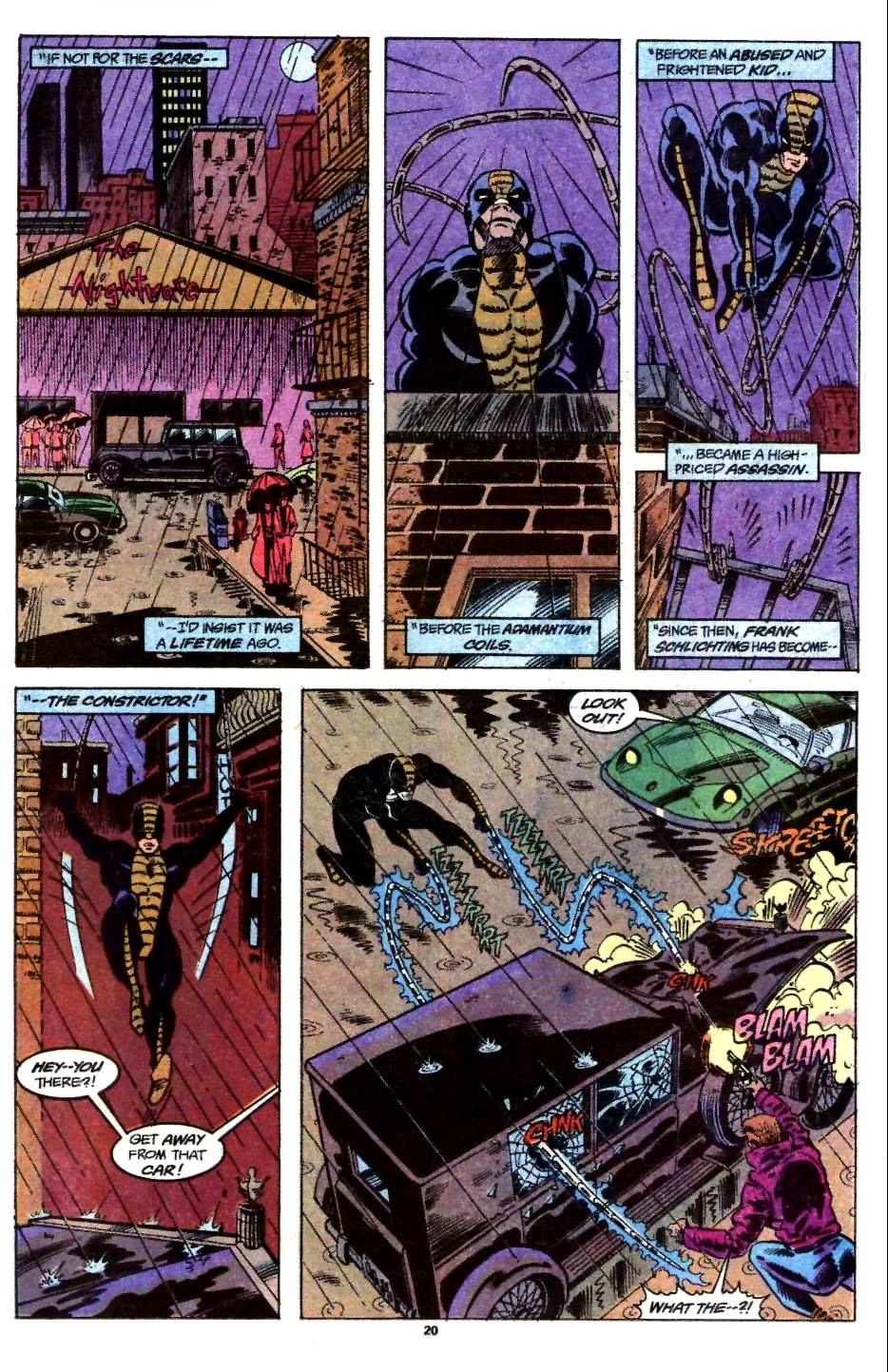 Issue #74 has two solo stories, and they’re both kind of interesting–a rarity for this very sub-par publication.  First, Constrictor gets the spotlight as we see a story of what he was like before he became a super-villain with adamantium coils.  Hint: He was an abused kid.  Yeah, that’s a pretty generic origin, but in this story he gets revenge on his perpetrators and the art is pretty good.  Extra points for a feature on (a) a villain and (b) someone we don’t see too often.  This is really what an anthology does best.  Creators: Scotts Lobdell and McDaniels.  Grade: C+. 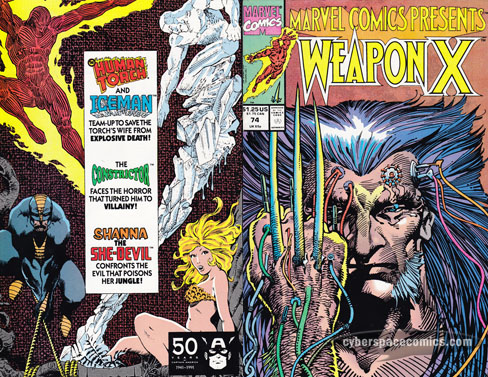 The second story in issue #74 is a Human Torch and Iceman team up.  Because they’ve got opposite powers, see?  The whole thing takes place as they fight a bomb a 10-second timer, so each page represents a second.  Not much of a story, but a pretty neat way to work an 11-page tale.  Nice narrative device.  Creators: Dan Mishkin and Joe Staton.  Grade: C+

Issue #75 also has two stories, and the second one has a fantastic splash page… 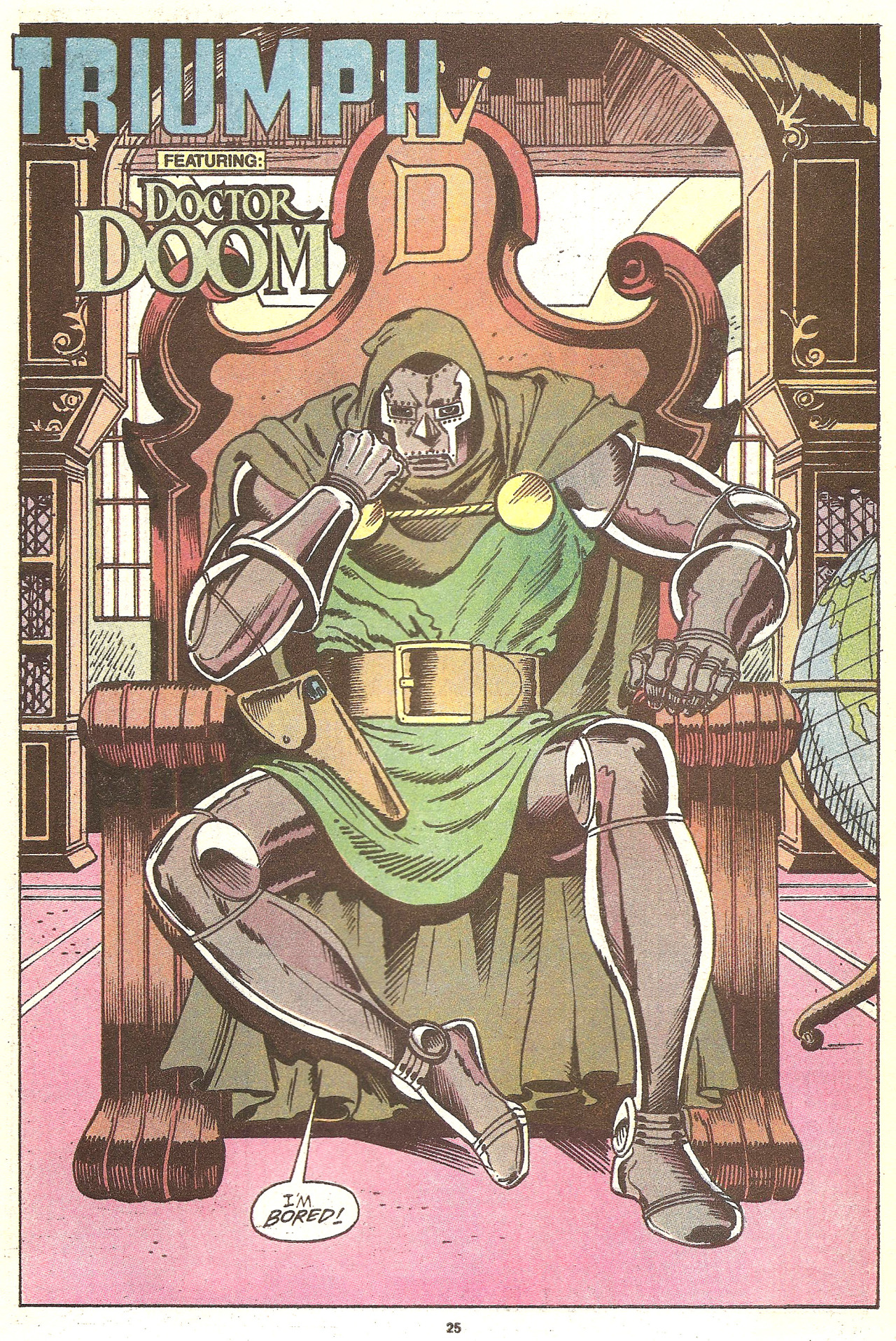 Doctor Doom gets ultimate power and literally beats up everyone in the Marvel Universe.  The punch-line is it’s a dream.  Actually, the real punch-line is it’s not even Victor Von Doom’s dream–it’s Franklin Richards’ dream!  Technically, then, this isn’t even a Doom appearance.  Even though it’s a pretty fun story.  All created by Dave Cockrum, so the art is great too.  Grade: B-.

And we close with a team up of Meggan Puceanu of Excalibur and Kitty Pryde as they rescue a couple of people shipwrecked outside the Excalibur lighthouse, only they turn out to be sinister villains.  Not so sinister, though, as they’re dealt with in a few pages.  There’s already a really bad Excalibur book.  Not sure why we needed this pointless story.  Creators: Sue Flaxman and Gavin Curtis.  Grade: D.