These are actually pretty solid comics.  The main feature continues to be Giant-Man and Wasp, but #52 starts a backup feature “Tales of the Wasp,” much like Iron Man was backed up by “Tales of the Watcher” at the same time.  In her first tale (above), she shows up in a bullet-bra to entertain wounded soldiers.  And indeed they are entertained.  Yeah, the stories are sexist—and the developing relationship between Janet and Hank is, as well—but it’s also critically formative.  And let’s face it, many male/female relationships WERE sexist in the 1960s.

In the main stories, we get a lot of Human Top.  He’s a villain who spins around a lot.  Eventually, he upgrades to the name “Whirlwind,” but basically still does the same schtick.  Hank is using grow/shrink combinations a lot more now, which is cool. 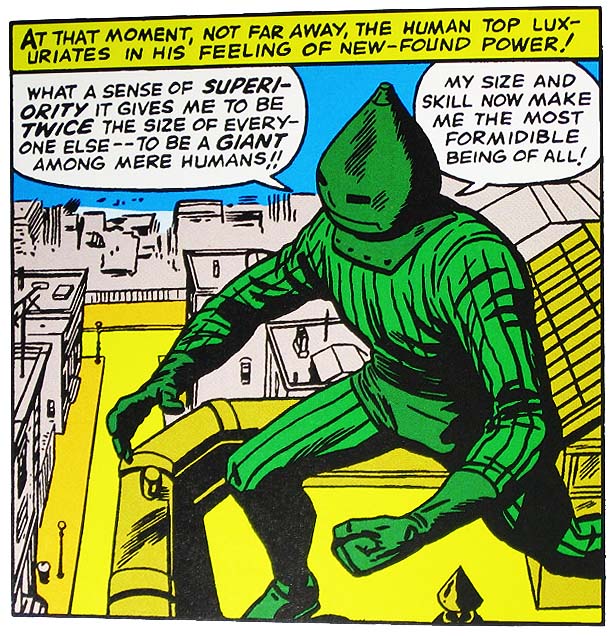 At one point, he becomes Giant Human Top.  That’s cool. 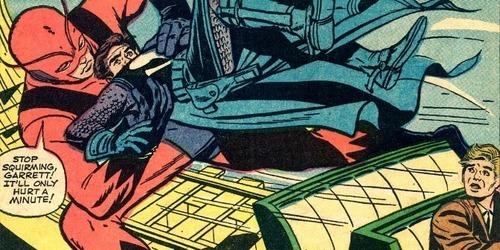 And I really should have made a tag for when Marvel heroes (or villains) get beaten by having a sheet thrown over them.

We also get the first appearance of The Black Knight, who actually became an Avenger in the 1980s.  Now, there’s a character who long outlived his acceptable shelf-life.

Unstable Molecules were created way back in Fantastic Four #6, and Pym was still using them for his Giant-Man costume, but I guess he wasn’t sharing them with Wasp.

He probably just wanted to see her nekkid.