The three most talented comic book creators of the 1960s (and arguably of all time), join together in a very rare moment of Ditko inking Kirby.  It starts with a great, thinly veiled sex joke (above).

The story they come up with isn’t all that great.   It’s Giant-Man and Wasp versus “The Human Top,” who would appear in multiple issues of TtA, and, much later, would change his name to Whirlwind.  As for his “origin,” he’s a frustrated department store figure skater who is all about the money.

Also in this issue, we learn that Hank Pym has invented a television that can turn the thoughts of ants into pictures, and that ants have now basically become a group of informers that tell him where he is needed.

Throughout the issue, Pym is constantly making potions to improve his performance as Giant-Man.  But he should focus on where he’s going. 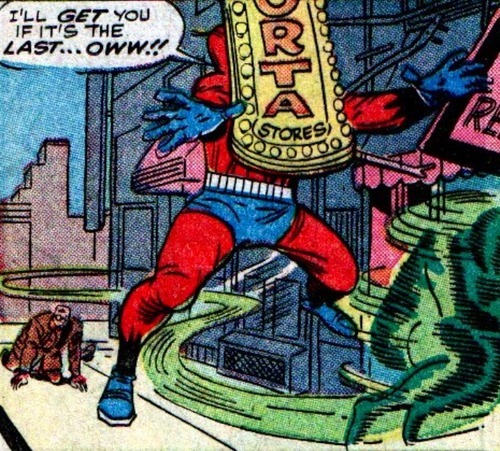 This is clearly a conscious reference to drug use—but not a negative one, yet.  Actually, with all the powers he gets, this appears to be a great example of better living through chemistry.

Creators: Stan Lee, Jack Kirby, and Steve Ditko!
First appearance: Human Top, aka Whirlwind.
Grade: B (not a terrible story, not a great one, but love the art)