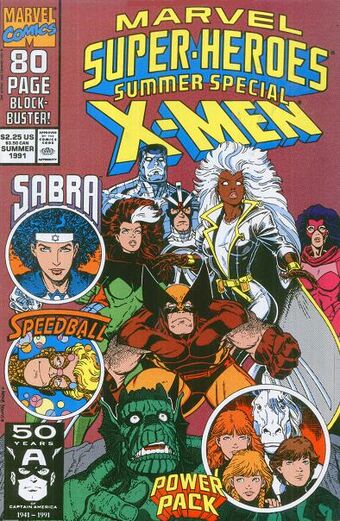 Another forgettable anthology.  Here’s the skinny on the stories inside:

Power Pack.  A check-in on the kids since their book was cancelled.  They’re on a family vacation at the beach and fight off some sea monsters who are only trying to protect their eggs from tourists.  Fairly typical Power Pack fare, but not done especially well.   Creators: Michael Higgins and Steve Buccellato.  Grade: D

Speedball: If it’s an anthology comic, there must be a Speedball story.  Creators: Mary Jo Duffy and Steve Ditko.  Grade: F, as usual.

X-Men.  There’s the first installment of a three-part X-Men story that will get it’s own post because it spans multiple issues.