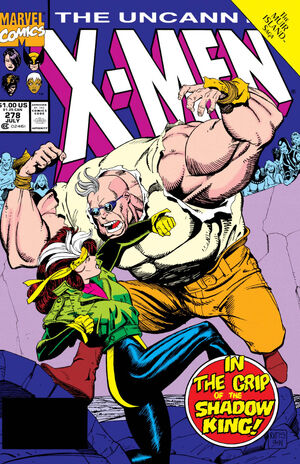 First of all and most importantly, Strong Guy is on the cover.  Guido is one of my favorite characters.

Over the past 6 months or so, we’ve seen Moira MacTaggert and a band of mutants on Muir Island, which include Legion, increasingly being under attack by Shadow King.  This is the story that brings it all together. 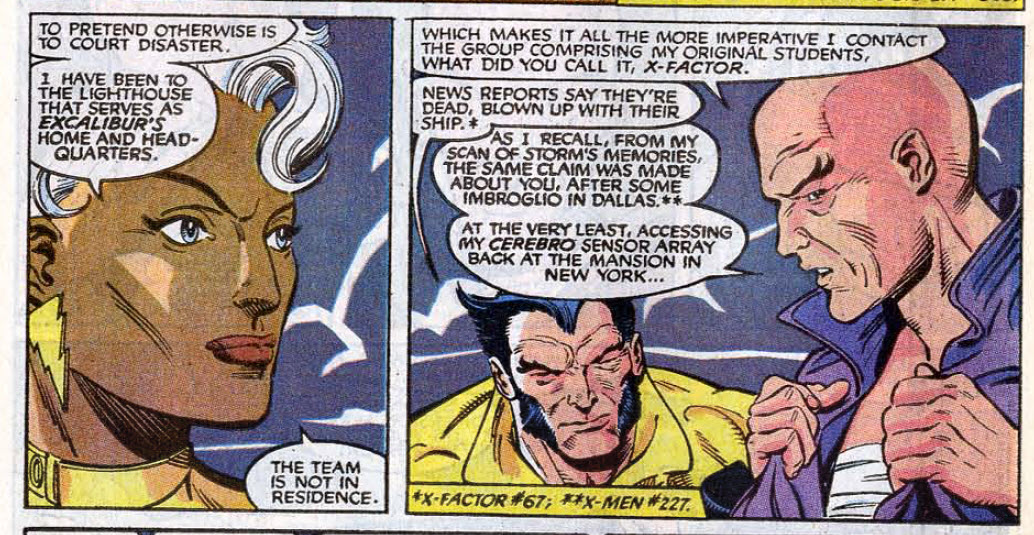 Professor X, in Shi’ar battle armor, personally leads a team of mutants to the island, where Shadow King is making the X-ers fight as gladiators…
ROGUE AND STRONG GUY
…in addition to trying to herald in a dystopian future.

Here’s where Storm, who is part of Professor X’s landing team, meets the Shadow King (possessing Legion) for the first time. 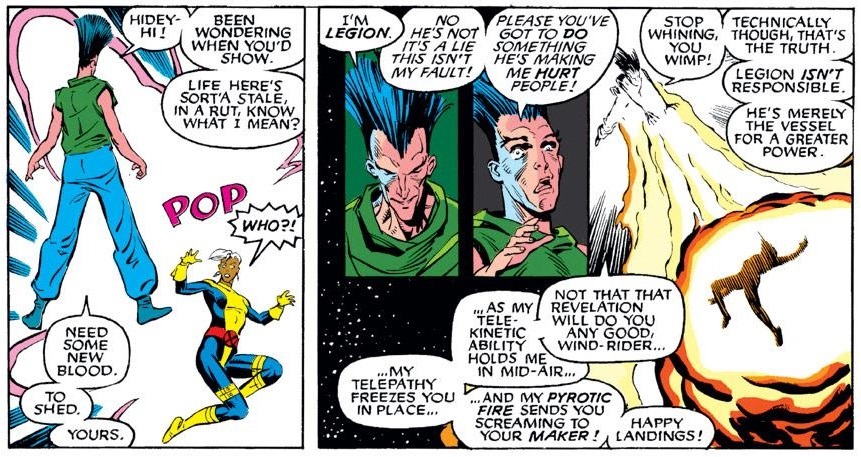 Over the course of the story, Shadow King’s “infection” increases, taking over more mutants, and he gradually starts to win and captures the Professor’s team.  Of course.  That’s a pretty straightforward story beat for an event.  Xavier then goes “home” to X-Mansion where Colossus, who has been MIA with amnesia for several issues, is back and has been overcome by Shadow King. Nice explanation of his powers. 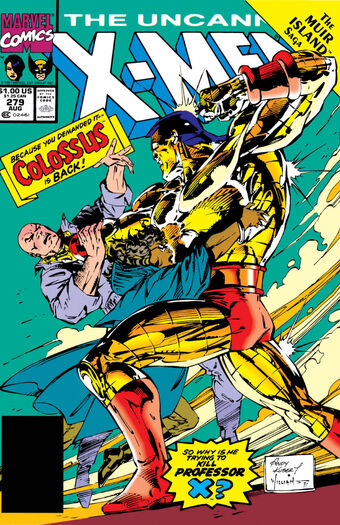 Actually, Colossus didn’t have straightforward amnesia—he had formed an overlying consciousness—living as “Peter Nicholas”—and in order to free him shadow King’s grip, Xavier shatters that false identity and restores Peter to his original self.

Simultaneously, the X-Men try to resist Shadow King’s mental influence.  And Wolverine is grumpy, of course.

Part three of the saga moves to X-Factor.  With his landing team defeated on Muir Island, Professor X turns to X-Factor for help.

We get a nice, albeit rushed due to the circumstances, reunion of the original team of X-Men with their mentor.

Together, they head to Muir Island for the big showdown of Professor X going mano a mano with Legion/Shadow King. 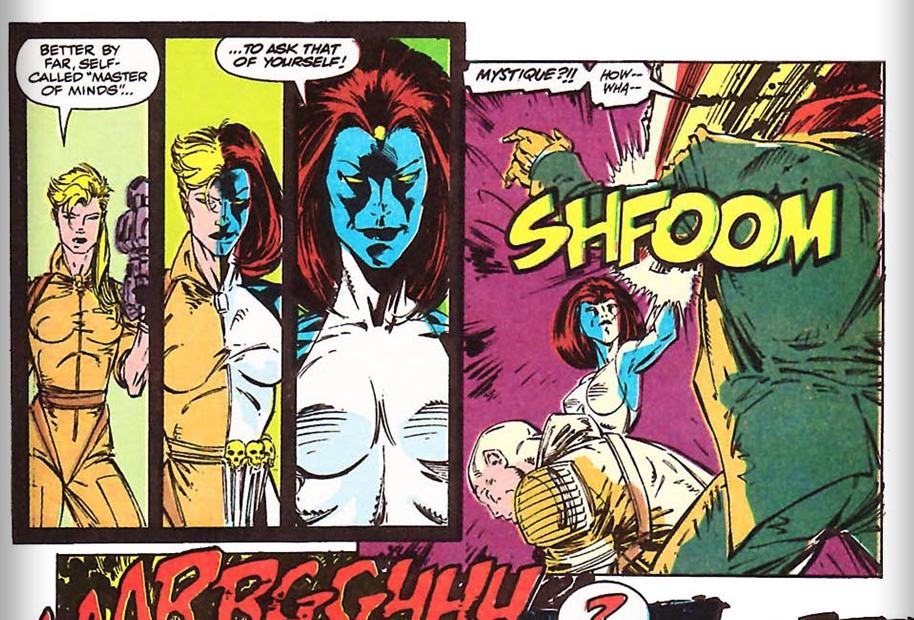 There’s a bunch of nice feints and twists along the way, like Valerie Cooper and some SHIELD ESPers accompanying the X-team’s assault on the island, only  we know one is really possessed by Legion.  What we don’t know is that Xavier is already aware of the double-agent and planted his own: Valerie is really really Mystique, who blindsides the Legion-planted spy.  You’d expect no less from a story with Chris Claremont writing it and Mystique involved in the action—before we get to the big conclusion.  We see Xavier acting as a master tactician splitting his team so that half attack on the physical realm—going after the possessed mutants—and pulling the rest of them into the psychic plane to fight him there.

X-Men #280 is billed as the final issue, but X-Factor #70 is also billed as part of this adventure and has some wrapping-up stuff.  It also has a terrific Mike Mignola cover. 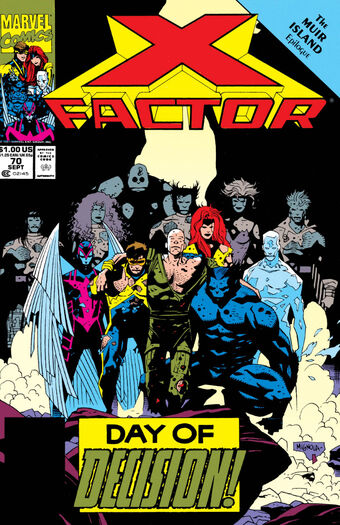 Lots of lasting repercussions, several of which look a lot like a “clear the Claremont plotlines’ movement in preparation of him leaving the series. 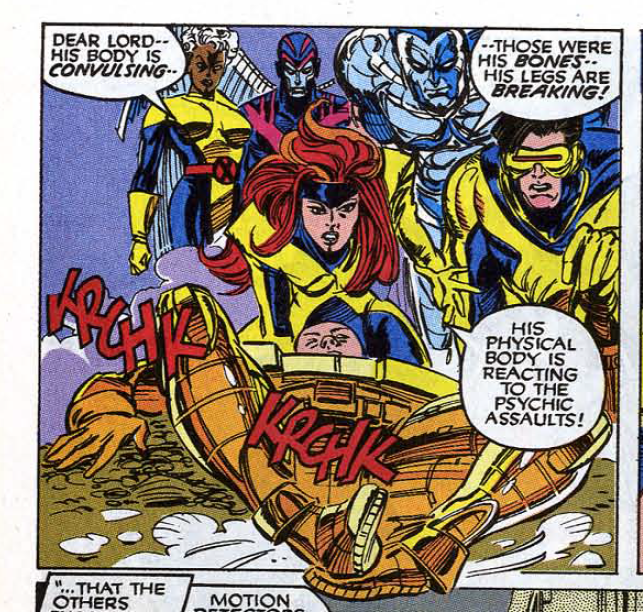 Professor X is back in a wheelchair.

Colossus and Polaris are back to normal.

Legion is in a permanent vegetative state. 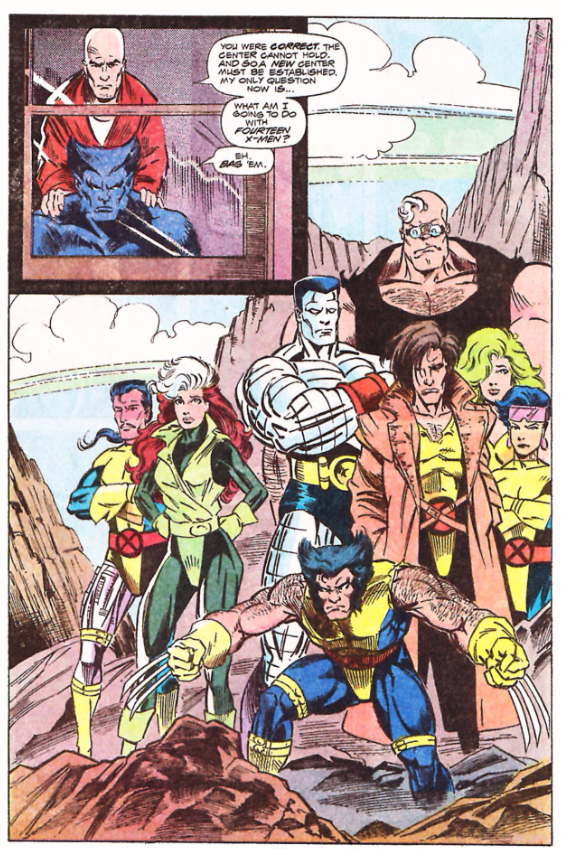 X-Factor disbands and merges with The X-Men, making the team so big that it splits in two.  Because fourteen X-Men is too many…Really?  As a reader, I’ve found the number of mutants running around to be unwieldy for a decade now, but why would he want less firepower–especially since it took all of them to defeat Shadow King?

Valerie Cooper has created a new Freedom Force including Guido, Polaris, and Madrox the Multiple Man.  This is the team that will morph into Peter David’s version of X-Factor.

Everybody gets their old costumes back, dumping the militarylike X-uniforms.

Oh, and also: Wolverine shows a new use for his healing factor. 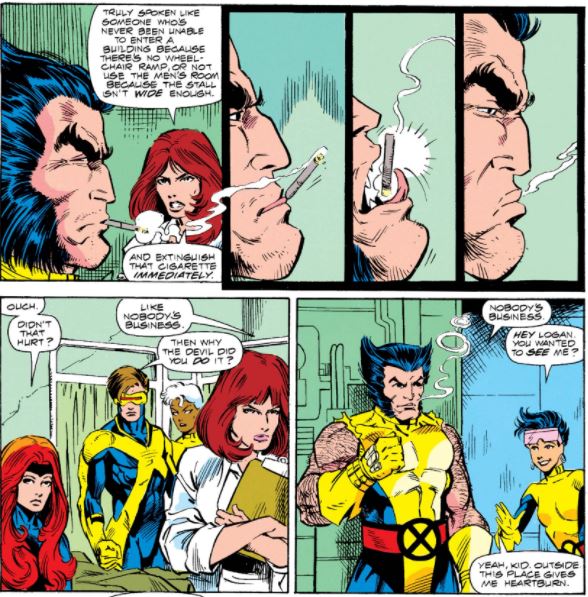