Vision needs a transfusion of the energy he shares with his brother Wonder Man.

is in critical condition after losing his arm and a transfusion of energy from his “brother” Wonder Man is required to stabilize him. With their bodies left prone during the procedure, the Grim Reaper strikes, aiming to assassinate whom he sees both as pretenders to the life of his dead brother. While unconscious, the Vision relives a dreamlike version of his origins and fights alongside his brother against his father, Ultron 5. Meanwhile, Vision’s physical body animates enough to defend himself and Wonder Man from the Grim Reaper’s attack. 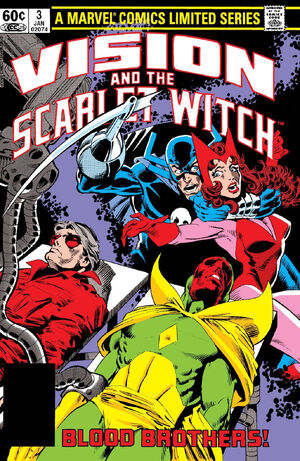