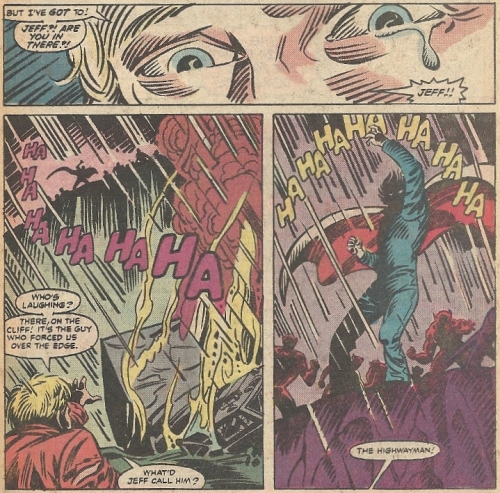 I can sum up this whole series in one word: Awful.  But you don’t need me to tell you that.

U.S. 1 was part of the trucker craze from the late 1970s, and as such was a bit out-of-step when it came out after the Clint Eastwood movies that paired him with Clyde the Orangutan and even after the copycat TV show BJ and the Bear had been cancelled).  Issue #1 introduces us to an evil spirit known as The Highwayman (who feels like a Ghost Rider villain), who causes a car crash that puts a character named U.S. into the hospital, where for some weird reason they put a new alloy into his head that enables him to connect to CB Radio without a device.

Apparently, the accident also gave him mechanical skill (and funding), because he creates a souped-up, remote-control truck with weapons and radar, which he decides he’ll use to bring The Highwayman to justice.

It’s even got a tape deck!

Then, he starts fighting a spandex chick with a whip named Midnight and a fat guy in a red admiral’s suit who flies a blimp and is named…Baron Von Blimp. Then it ends with U.S. One going out into space.

Creator: Al Milgrom and Herb Trimpe on issue #1, Frank Springer (ever mediocre) gets involved later, as do others who I’m sure appreciate that I’m not naming names.
Grade: F