Gerry Conway didn’t really write “arcs;” he wrote a soap opera with story beats that tended to hit hard at the end of each issue (cliffhangers). But these three issues run together—they feature Sue returning to Reed, with Franklin, only to be taken (along with nanny Agatha Harkness) by Annihilus of the Negative Zone, who wants to use Franklin’s cosmic power as a food source.  In the process, Reed goes crazy and Medusa hits him on the head with a wrench. Not sure why cold cocking a guy made out of rubber has any effect, but whatever.

Okay, so Agatha appears out of nowhere to warn Sue that Franklin’s power is growing, and cannot be hidden any longer.  Sue starts driving towards the Baxter Building and calls Reed to tell him what’s happening, but their phone signal is cut off when Annihilus seizes Susan and Franklin. 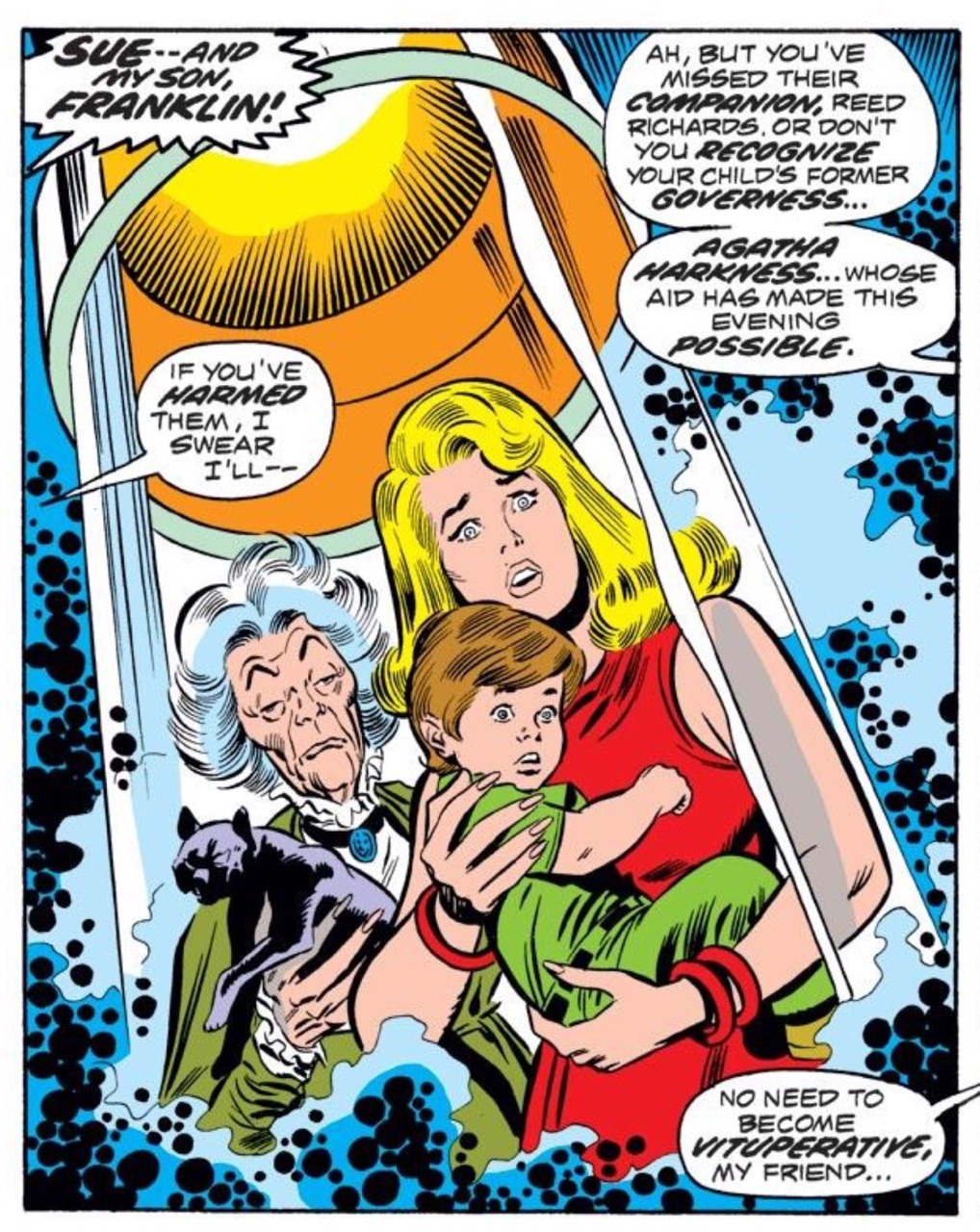 After a lot of posturing and preening, Annihilus narrates a long-form story of his origin.  It’s the first time we get some insight into how he got the way he is, and it’s pretty cool.  I also like the way John Buscema notches the edges of the panels, so you can distinguish the reverie from the current story… But Franklin’s power continues to grow…

The Annihilus part of the story ends with Reed shooting Franklin with a gun so that the kid doesn’t explode and get his cosmic power all over everyone.  Susan can’t forgive him, so the team breaks up.
Issue #142 is aftermath.  Medusa is sympathetic in that she dresses sexy and lures Reed to a class reunion. This is what I mean about Gerry Conway writing every character as if s/he is a narcissistic, unsympathetic jerk.

Anyway, I’m not too worried about the team breaking up.  It happens so often I have a special tag for it (below).

Finally, we learn that Thing likes to decorate his room with pictures of celebrities.  No, technically they don’t actually appear in this book but I’m counting this as a celeb appearance anyway.

The FF was always a comic that loved to have “real people” showing up.
This is also the story that introduces the new character Darkoth, who was friends with Ben Grimm before Ben became Thing.  Darkoth, real name Desmond Pitt, was kidnapped by Dr. Doom and turned into a monster, then used by Doom until he figured out the truth.
Creators: Gerry Conway and John Buscema
Grade: B-
Agatha Harkness, Annihilus (Negative Zone), Black Bolt and the Lesser Inhumans, Celebrities and Politicians Appearing in Comics, Darkoth (Desmond PItt), Fantastic Four (complete series), Franklin Richards Has Powers, Marvel 1973, Marvel 1974, Medusa (Inhumans), The Fantastic Four Break Up, Wyatt Wingfoot
Tweet Pin It