Answer: A couple filler issues, then bring in Wolverine to try to recapture the public’s interest.

These issues aren’t terrible.  In fact, they’re pretty good.  But they’re nowhere near as good as Frank Miller.

The best thing about these issues is Klaus Janson, who stayed on to handle both pencils and inks.  No, he’s not as good a designer or penciller as Miller–but he’s close.  Denny O’Neil signs on for issues #196 and 196.  O’Neil’s run is actually damn good–it’s very underrated, largely because it’s sandwiched between Frank Miller’s first run and his return with Daredevil: Born Again, and these are some of the greatest comic books of all time.

O’Neil’s Daredevil was a little different: The focus was on the hero’s adventures, not the grit of the streets.  But the character was still the same manipulative, selfish brawler created by Frank Miller.  It was the tone of the book that changed, not the character work. This is the beginning of a long-form arc: Bullseye’s return, and a continuation of the Tarkington-Brown-knows-Matt’s-secret storyline.  Wearing a Cobra Commander hood (appropriate, as Larry Hama is one of the artists), a man hires some folks to move Bullseye out of the hospital so that he can co-opt him into his war.  We later learn he is named Lord Dark Wind. 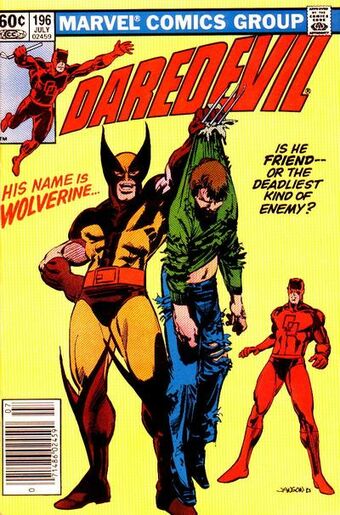 Wolverine attempts to foil the attempt, but fails.  It’s a good, macho story.

We then learn that Brown is the one who told Wolverine about the kidnapping of the body-casted Bullseye, Wolverine finds out Brown is actually a bad dude, and slashes him to prevent him from shooting Daredevil.  Daredevil is forced to take Brown to the hospital (Wolverine would have let him bleed out), and Daredevil learns that Brown has cancer.

Because everyone who learns about a secret identity has to die.

It’s assumed that Brown still won’t reveal DD’s identity in exchange for DD keeping his mouth shut about Brown’s own illegal actions, but if he’s got cancer, really, why would he stay quiet?

Anyway, in the end DD learns that Bullseye is being shipped off to Japan, so he goes overseas to track down his foe.

Another attempt to link Daredevil to the Miller run: Turk! Creators: Denny O’Neil and Klaus Janson, with breakdowns by Larry Hama
Grade: B-