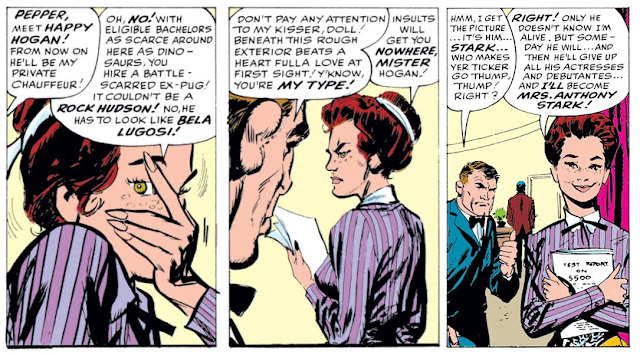 It’s really the first good Iron Man story.  Good, but not great.  And strangely sloppy.  But more on that in a minute.

As you can see from the panel above, Hogan is introduced as an extraordinarily strong man with innate heroism.  When Tony’s recreational racecar crashes, Hogan is the only one who leaps towards the burning vehicle to save Stark.  And Hogan doesn’t even know him at this time.

But Pepper’s intro is weird.  At right is the first panel we see of her, and she’s clearly named “Kitty.”

Stan Lee was clearly doing too much at this time, and stuff like this could get by him. And there’s also this cool House Advertisement for The Avengers #1.