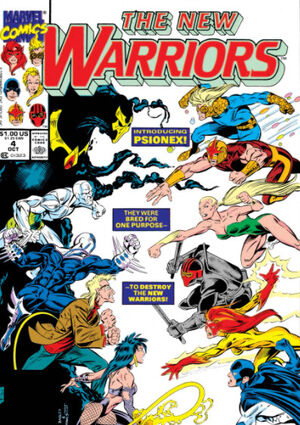 It looks like Genetech will be an arch-enemy for the New Warriors.  Interesting how many comics in 1990 looked for corporate villains.  In Iron Man, it was typical, but also Namor’s only real enemy in his solo book is a big company.

Last issue, Mad Thinker—on behalf of Genetech—tested the New Warriors’ abilities.  So this issue starts with them breaking into a Genetech main facility to see if they can figure out why.

They meet—and get captured by—Genetech’s own super-team, the Psionex.  Speedball is the only one not captured because he arrived late to the party (presumably because he was in one of his countless, awful solo adventures in one of Marvel’s anthology comics), so he has to rescue them.  After the big fight, a Genetech executive says he’s sorry and he’ll be better in the future.  Seriously.  And the New Warriors believe him.

I’m going to chalk that up to them being very young heroes who want to believe they’re doing good.

Overall, this is a good comic.  Best of all, it’s FUN.  Comics in the 1990s could get hyper-serious and over-muscular, but that’s not happening here.

Psionex will appear a few more times, so it’s worth knowing who they are…

…But they’re tagged as a group because mostly that’s how they’ll continue to be seen.