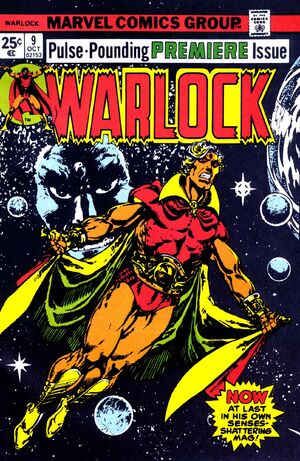 Let’s get this out of the way: #9 calls itself a “premiere” issue.  That’s so the opposite of the way things are now, where everything has to have a #1 on it to sell.

My how the worm does turn.

Warlock continues his fight against his bad self, Magus, while Gamora is directed by an unseen boss to kill Magus.

Eventually, we learn that Gamora was sent by Thanos, because Magus was actually created to kill Thanos.  Yes, this is the saga when Thanos starts to really “matter,” at least in the cosmic sense…. This is also the first appearance of a new cosmic being, The In-Betweener, who exists in a dimension between reality and fantasy. In case you still don’t know who Thanos is, Captain Marvel shows up to break the fourth wall and tell us Thanos’ backstory. Thanos convinces Adam Warlock that they should be friends and allies against Magus’ Black Knight Death Squad.  Essentially, Warlock and Thanos team up to take on Magus, because (a) Thanos has an interest in Warlock never becoming Magus and assembling hordes to kill Thanos; and (b) Magus is really evil and is engaging in genocide.  (Which seems odd, since Thanos loves death, but I guess this is a lesser-of-two-evils/enemy-of-my-enemy kind of thing.)  Needless to say, their alliance doesn’t last long (since Warlock is Life’s champion, and Thanos loves death).

And, in the end, Warlock destroys his Magus-future timeline The Warlock series was cancelled in six issues, and #15 wraps it up. Warlock meets “The Humble Thinker” who tells Warlock that it is his destiny to kill Thanos and then kill himself. But what we really learn is that Warlock’s soul gem is one of six. This is the introduction of the “Infinity Gems” concept.

Warlock then disappears from Marvel continuity for two years, next appearing in Marvel Team Up #55—by Bill Mantlo and John Byrne—where the soul gems concept is advanced and the storyline continues.