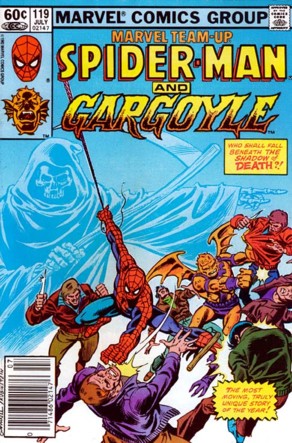 J.M. DeMatteis pulls his Defenders character over to MTU, following Defenders #109.  So, there’s no hero-fight.  There’s also really no fight.  This is an issue purely about characterization—quite unusual for MTU.  And they’re not even teamed up for a lot of it.  Gargyole flies a dying old lady and her frightened daughter around the city before sitting with her and helping her transition through death.  Meanwhile, Spider-Man helps the old woman in his life, Aunt May, by helping find her fiancée Nathan who skipped out of the old folks home after his friend died of cancer, and wound up in a bad neighborhood. 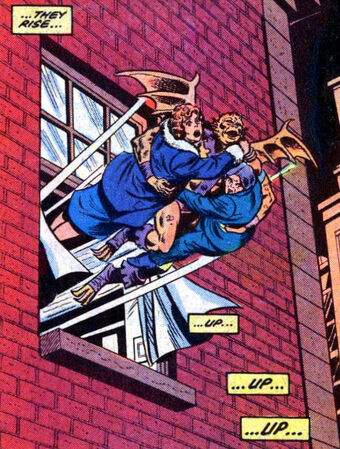 It’s a very interesting issue about death, dying and aging.  Not at all what you expect from
Marvel Team-Up, and very well done.

Grade: B+, not because the issue “matters” but precisely because it doesn’t: It’s unusual to have a quiet and philosophical, and sensitive, Marvel comic in this enlightened age of “adult” comic buyers—but it was practically unheard of in 1982.  This kind of work helped elevate the medium.