It all starts with Angel being attacked by hawks.  We learn later that they were “experimental anti-personnel hawks” that Mystique stole from the Pentagon.  Let’s let that sink in for a bit.

So Mystique is now leading The Brotherhood of Evil Mutants, but there’s only three people in it and they’re all girls (Mystique, Destiny, and Rogue).  So, if there’s a bad girl mutant squad, of course they’re going to appear in Dazzler, a book about a girl hero.

I’m being a little hard on this book, but frankly, it earns the pain. 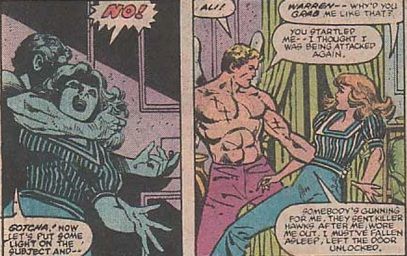 Angel is a straight up stalker, and now we see Dazzler allowing him to carry her around the city and appear shirtless in her abode, even though Dazz already has a perfectly good (albeit a bit nebbishy) boyfriend.  Angel’s behavior should not be tolerated or rewarded.

Having said that, the Brotherhood is going after Angel because he’s on his own and they figure they can pick him off and use him to get to the X-Men that really matter, like Wolverine, Colossus, etc.  When the Brotherhood attack Angel, Dazzler is with them, and Angel tries to chivalrously say that Dazzler isn’t into the whole superhero thing, so Rogue decks him… Then Mystique changes her form to look like Angel’s girlfriend Candy Southern (yes, he’s still dating her while stalking Dazzler—again, yeeeechhh), gets Angel interested, and then gives him a nutshot. Apparently, that’s where Allison draws the line because she changes into her “costume” and joins the fight.

What’s her costume, you ask? They fight off the Brotherhood and escape.  Angel decides to go into hiding(!), leaving Allison exposed.

What a weird issue.

Creators: Danny Fingeroth and Frank Springer
Grade: C+.  It’s stupid and politically questionable, but I have to admit it’s so bizarre that it’s a lot of fun to read.