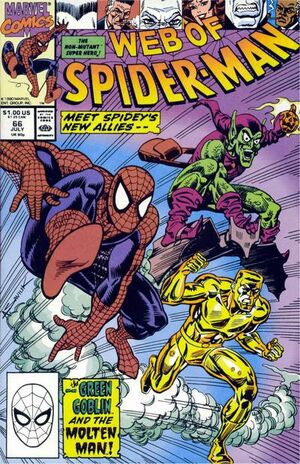 Green Goblin returns, which is cool.  Molten Man does too, which isn’t as cool.  And, in fact, he hasn’t really “left.”  Two issues ago, Harry Osborn gave Molten Man a job with Osborn Industries after MM repented for his past.

And as soon as he’s there, nascent crime lord Tombstone tries to get him to commit some industrial espionage. But Green Goblin is ahead of the game, floating above on his glider. 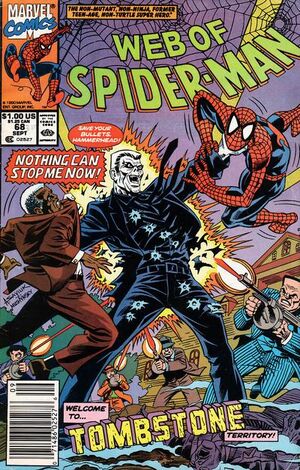 Spider-Man almost gives up Harry’s identity when the three first get together.  Later, of course, Spider-Man becomes a hypocrite and tells Harry not to take on the green suit—even though, as Harry points out, Spider-Man does the same thing.  Harry explains he’s trying to redeem his family name by using the Goblin suit for good. In the end, Spidey seems to win the argument.

Readers also will remember that Joe “Robbie” Robertson has been trying to come to terms with his past, which is connected to Tombstone, and he even did some time in jail with the fellow.  Robbie also joins the fight against Tombstone, and in this story shoots Tombstone.

But Tombstone has been powered-up, with more strength and invulnerability, thanks to (in his mind) some things that happened during his jailbreak with Robbie, so Tombstone forgives Robbie (wrapping that storyline).

Eventually, Tombstone tries to take over Hammerhead’s crime family and gets blown up. Of course that’s not the end of him.  He spent most of this arc showing everyone how he’s stronger than ever before!  And through it all, Mary Jane stays thin. 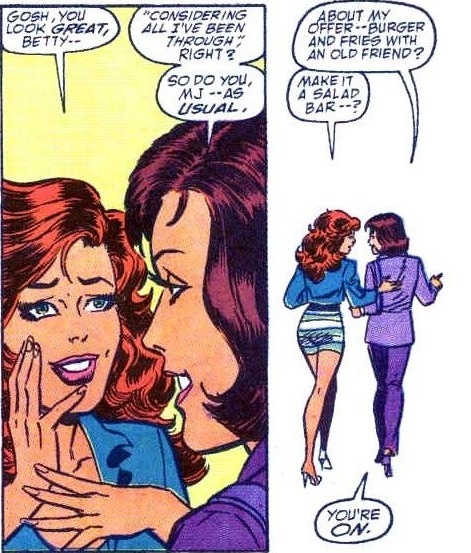 I’ve got mixed feelings about Conway’s second run on Spider-Man, particularly because he’s writing this book and Spectacular at the same time but the two books often seem to be telling the same story without referencing each other.  I also like the way he’s using all the crime lords in a very slow-boiling gang war, but his writing style feels dated and often the subplots are resolved anticlimactally—like when Tombstone just “forgives” Robbie (even after Robbie shoots him), after a year of books where the two of them are feuding and even serving jail time together.