This storyline starts out very interesting: The Hulk follows Betty Ross home (yes, a giant green man can actually stealth-tail someone) and sees her kissing Major Talbot, which leads him to conclude that he cannot find love on Earth and so he wants to return to Jarella.  Then Banner decides to find Hank Pym to help them get back to her world.

Meanwhile, a senator is injecting himself with Hulk’s blood.

But the real reason this is such a great arc is still to come.

Hulk gets captured and put on trial.  It’s such a big deal, General Ross interrupts the President.

And Jonah and Peter Parker can’t get into watch.

One of the best, if not the absolute best, Hulk stories is Planet Hulk/World War Hulk, written by Greg Pak, in which a collection of powerful folks (Tony Stark, Black Bolt, Reed Richards, etc.) who call themselves the Illumaniti decide Hulk is too dangerous to stay on Earth and send him far away into space.

Greg Pak must have read these issues of Hulk. It’s shocking that for six years, nobody at Marvel thought of a story about Hulk going on trial for his destructive crimes.  It’s such a great opportunity.  A ton of Marvel superheroes including Captain America, Nick Fury, Spidey, the Avengers, and the FF come testify or watch the trial.  And, where there’s a trial, there’s a lawyer.  And where there’s a lawyer in the Marvel Universe, there’s Matt Murdock.

And where there’s a trial and a courtroom full of superheroes, there’s something that goes wrong…But in the end, all the heroes forgive Hulk and, of course, he ends up not being convicted. 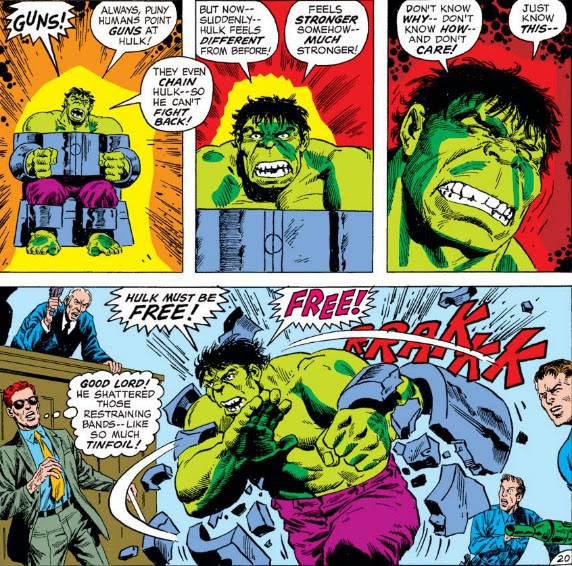 I wish it had a little more depth, or had gone on a little longer, but it is only 1972 after all.

But soon, more Pak-like stories occur as Hulk will be launched into space by a member of the Illumaniti (even if they aren’t called the Illuminati yet).