It’s a Doc Strange story.  Who says you can’t foreshadow with bad puns? In a graffiti-strewn NYC subway, a girl falls in front of a train and Dr. Strange acts quickly to save…Her harmonica? The girl is hit by the train, but instead of blood and gore she bursts into light and flowers that have strange effects on all the bystanders on the platform.

From there, it gets weird. Seriously. It’s not weird yet. The bystanders have all kinds of weird stuff manifest for them, like one guy literally has his face erased as a reflection of how anonymous he feels in his job, and Dr. Strange and Clea try to reverse these mystical events, while Valkyrie quietly takes the harmonica.

The girl hit by the train was actually a mystical version of Barbara Norris’ mother, who was a mystical force (called “Destiny” but not clearly related to the Marvel cosmic being who appears in other books).  You know Barbara–she’s the host for Valkyrie, the human whose body Val is occupying.

Thing gets involved because a Yancy Streeter is affected by the mystic events, but he’s really not critical to the story. This is much more a Defenders story. And, in fact, that’s where it resolves.  In Steve Gerber’s first issue of The Defenders.  That’s where we learn that before she hosted Valkyrie, Barbara Norris was…Married! 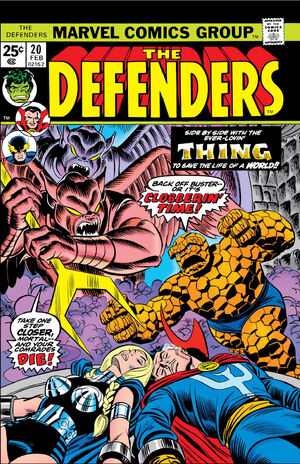 Norris’ father, Alvin Denton, is killed during a battle between Executioner, Enchantress, Thing and Dr. Strange, and when Valk discovers this, she feels sad.  It’s not her did, it’s Barbara Norris’, but in a strange un-Norse-demigod expression of humility, Valkyrie has always felt conflicted about stealing Barbara’s body.

Grade: C+.  It’s above average, but it feels rushed and cluttered.