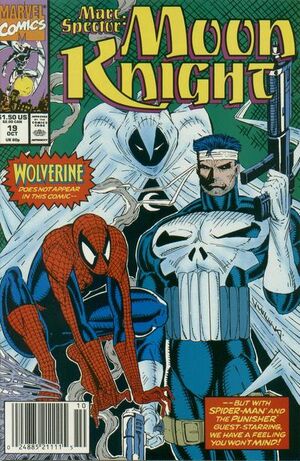 That cover perfectly sums up everything that went wrong in the 1990s.  Punisher.  Spider-Man.  And a mention of Wolverine.

A clandestine group called Secret Empire nearly kills Midnight, who was wearing Moon Knight’s outfit because the real Moon Knight was busy, so Moon Knight and the cover guest stars go after the Empire. I for one am soooooooo tired of guys like Spider-Man and Daredevil complaining about Punisher’s lethal methods but then teaming up with him anyway and never making an honest effort to shut him down.

It’s unclear if Moon Knight is kill or not-kill camp.  But he’s a mercenary.  This shouldn’t be a hard decision for him.

Marvel 1990, Marvel Superheroes Who Kill, Microchip, Midnight (all versions), Moon Knight (all appearances), Punisher (every appearance), Spider-Man appearing outside his own comics
Tweet Pin It