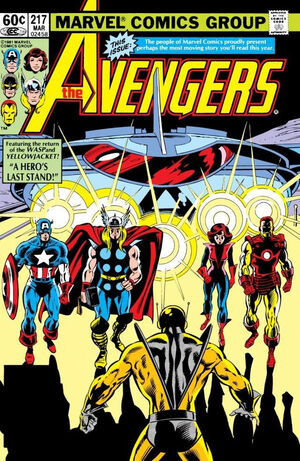 This is a major, important issue in the development of Hank Pym.  We see him down on his luck, unshaven, calling Tony Stark from a payphone.  Why?  Because he’s been court martialed out of The Avengers, Janet is divorcing him, and he’s stripped of his identity as a hero.

So, how does he solve that problem?  By getting into bed with Egghead, who implants a bomb on his own niece to blackmail Hank into stealing some adamantium for him.  The Avengers show up, stop him from stealing the precious metal, and, eventually, uncover the truth which is that there was no bomb in the first place.  Here’s the team basically slapping the crap out of Hank:

It rightfully ends with Hank in jail. But that’s not all!  Also in this issue, Jan steps up and nominates herself to lead the team. It’s a nice sequence: She’s the person who named the team, way back in Avengers #1, yet she still has to step forward and demand the chance to lead.  But Cap, ever respectful of democracy, immediately and without reservation agrees that it’s time to put his position up to a vote.  Iron Man stumbles a little bit with the title (“you want to be the chairman—uh, chairperson Jan?”) and Thor still ends up telling her to “lead us, fair one,” but on the whole the all-white-males do give her the opportunity without any meaningful doubt or delay.

And I still haven’t talked about my #1 reason that I love this issue: It’s the first appearance of Fabian Stankowicz, an inventor who tries his best to be the next Iron Man but can’t is so lame that the team basically ignores his audition. Jan buys a new limo every month?  Wow.  This is real wasteful white privilege, and Stakowicz puts civilian lives in danger with his antics, but it’s still pretty funny.