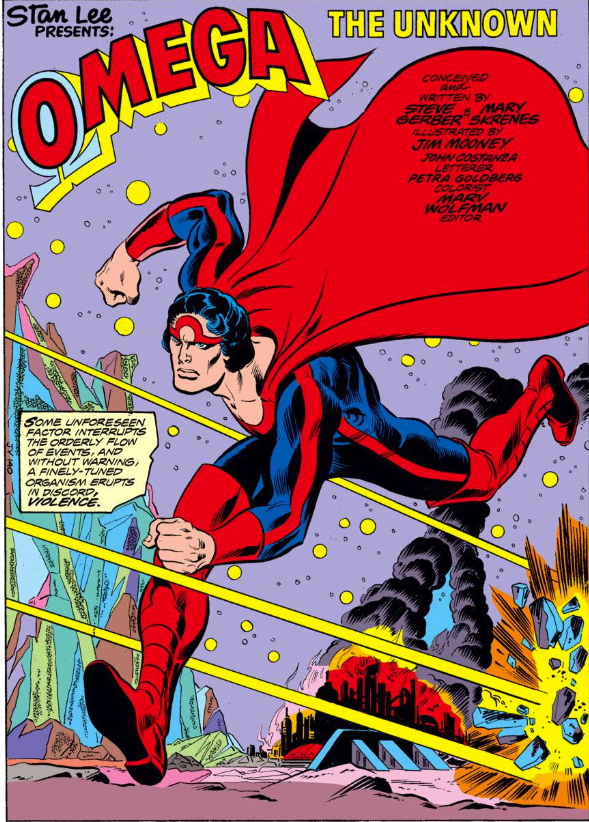 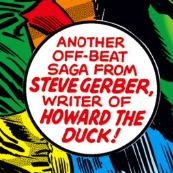 My love for Gerber is no secret, and my appreciation of “Hard Time,” the other work he did with Mary Skrenes is my favorite Steve Gerber comic–and one of my favorite comics, period.  Omega was one of his earlier works for Marvel, and one of his most experimental.  And that’s saying a lot–seeing as how Gerber’s most famous works are Man-Thing and Howard the Duck.  But just admire that splash page, above: A word box with three- and four-syllable words that are used not for bombast (a la Stan Lee) but for description.  And the description, intellectual and almost clinical, stands in contrast to the action: Explosions, stars, and a vaguely Supermanish figure that nobody had ever seen before….

And it starts in the middle of the action, without backstory or origins.  Gerber dives right in.  That’s certainly common in modern comic books, but back in the 1970s this was rarely (if ever) done.

And as quickly as the hero is introduced, he fades into the background.  In his place, a 12-year old boy with a 40-year old’s insights takes center stage.  James-Michael screams when Omega screams–there is a connection between them, but it is unexplained.  JM talks–he is verbose–while Omega says nothing for the first several issues and barely anything for the entire ten-issue run.  In part, the mystery of the comic was intentional: Gerber is all about exploring characters and slow burn.  But Gerber also said that he and Mary Skrenes had planned out the entire story before Marvel unceremoniously cancelled the book and burned all bridges with Gerber.

So, what is a superhero book in which the hero is really a back up character really about?  It’s about a boy growing up, sure.  But it’s also an unflinching look at life and death.

I hope some of you watched the terrific PBS documentary “Superheroes: A Never Ending Battle.”  One of the points made in it was that Marvel in the 1970s depicted New York City as the truly dangerous, ethnically diverse, and economically stratified place it was.  I lived there–that’s when I was growing up–so it was cool to see panels like the one above.  Yes, the black woman’s dialog is stilted, but just having blacks, whites, Hispanics…All types…Was a big deal. 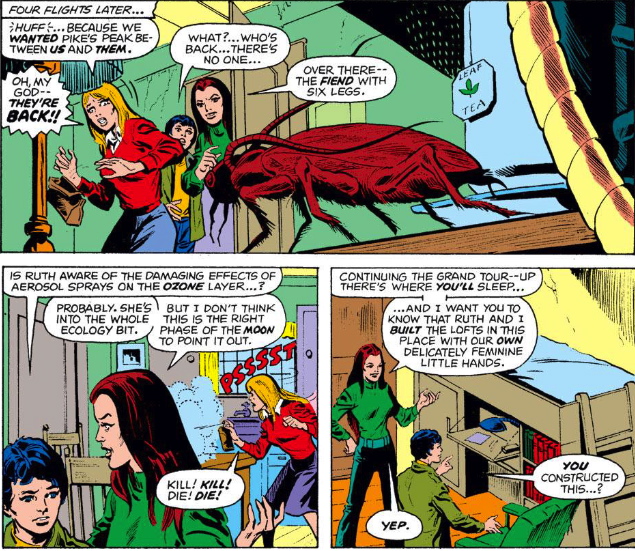 The panels above show a tenement in Hell’s Kitchen, and the impact humans have on the world–just from the small act of killing an insect.  It’s an illustration of the Butterfly Effect.  Omega is full of sequences showing man’s cruelty to man.  The page below depicts bullying…. 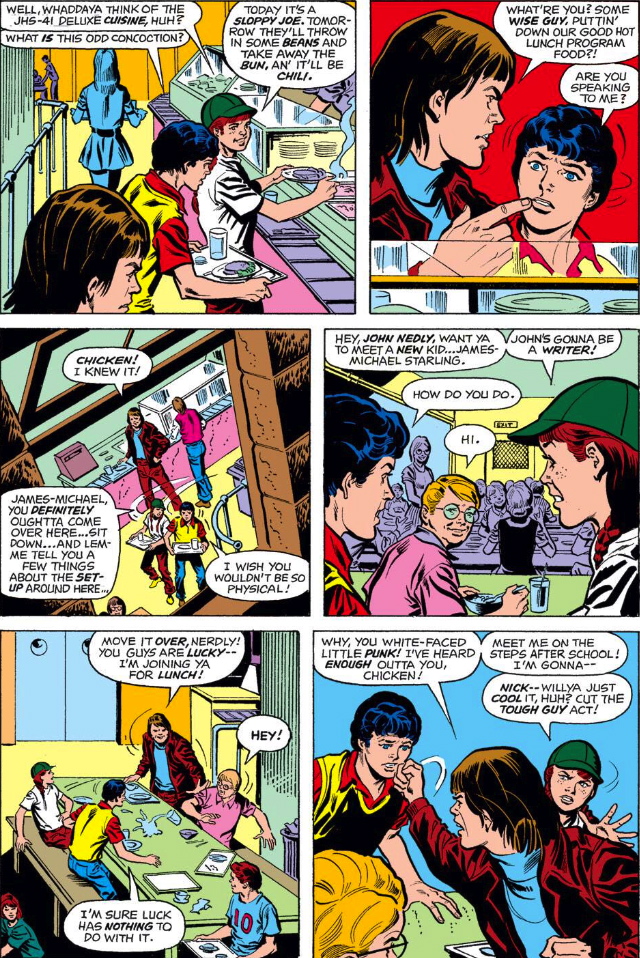 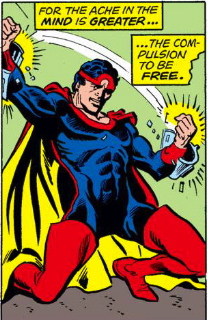 …A theme that was also central to Hard Times, and one common throughout Gerber’s work.  Man-Thing burns only those who fear him.  Howard the Duck was “trapped in a world he never made.”  These are intellectual revenge stories, and here Gerber puts them in the superhero context.

Gerber and Skrene’s philosophical examination of puberty parallels Omega’s own mysterious journey.  He does seem to be an alien, and he seems to have a mission, and he’s clearly conflicted….Sort of like Silver Surfer meets Superman.  He’s tortured and alone.  James Michael is as well.  Without giving away too much, I can tell you that he loses his family in the very beginning of issue #1 and spends the rest of the comic coming of age in an apartment with two extremely attractive young ladies.  But he’s never sexual towards them–or anyone, for that mater.

I picked the panel at right partly to show the philosophy of alienation that permeated Omega The Unknown, but also because it has particular resonance for me.  As many of you know if you’re regular readers, I have a chronic, debilitating and painful illness.  At one point in my life, I tried meditation to help ease the anxiety and pain.  Most of the meditation guides I went to were all about finding a happy place, “picture yourself on a boat on a river” kind of stuff, which never worked for me.  The pain was too intrusive.  Then I met a guy who told me to go towards the pain.  To picture it, to allow it to envelop me.  In so doing, I realized the fear of pain was what really hurt–the pain itself, while unpleasant, was completely tolerable.  “The ache in the mid is greater.”

And, of course, it’s a Gerber comic so there’s weirdness.  Like Omega’s arch enemy: El Gato.  Who sics cats. 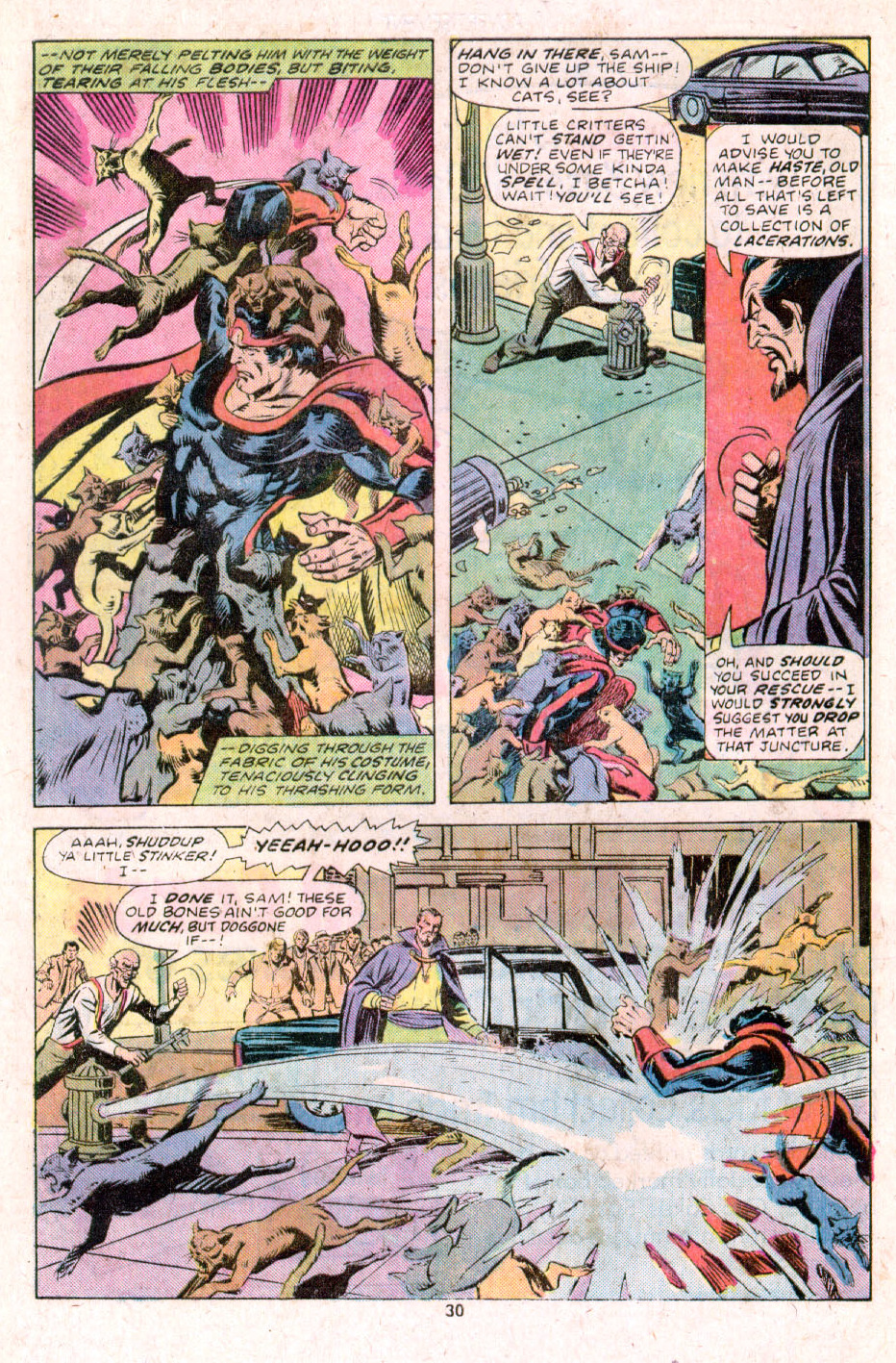 Omega is a guy who held his own against Hulk, but for some reason cats are his undoing.  (In the next panel, he is rescued by an old man who blasts the cats with water and makes them scatter.)  I could go on for days about this book.  I haven’t even really touched on the cruelty and violence that happens (mostly off-panel due to the Comic Code Authority), but I do need to share this: Steve Gerber never got to finish the book. Things with Marvel started going south for him, there were a few decent fill-in issues. 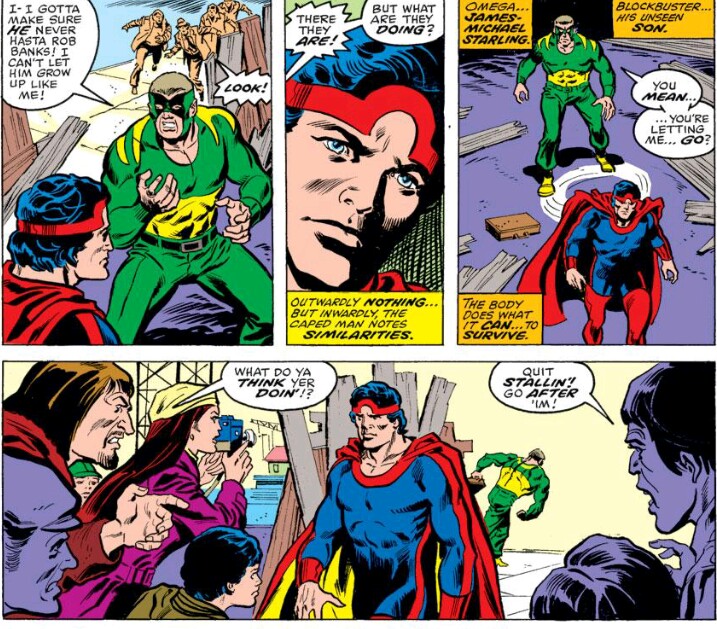 #7 by Steve Edelman and #8 by Roger Stern featured “Blockbuster,” who turned out to be the esoteric Man-Brute villain from Captain America #121.  Then the book was abruptly cancelled, without explaining the bonds between Omega and James Michael or, really, answering any of the questions raised over the ten issues.  We did get to see some tying together of the Gerberverse (Foolkiller joins the fun towards the end of the run), but in the end all we got was a promise from the creative team…. 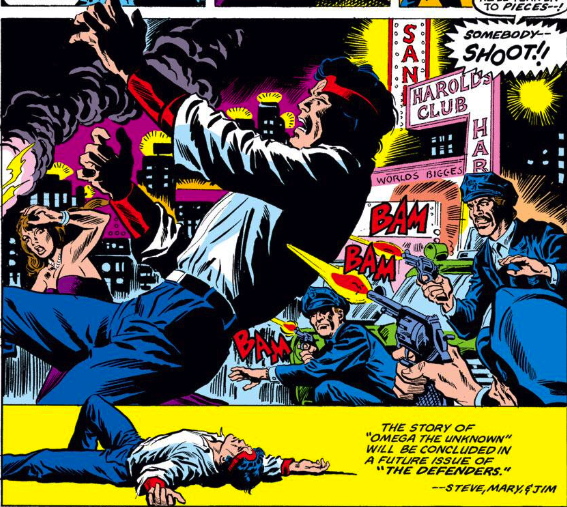 …It was a promise that Gerber, Skrenes and Mooney couldn’t keep personally.  But it was kept–in Defenders #46 and 47.  Which is why we took this interlude in the first place: To set up the next posts in my “Panel a Day of the Defenders” series.

Hope you’re all enjoying reading this as much as I am writing it! 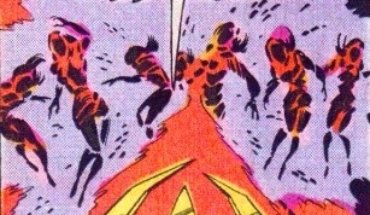 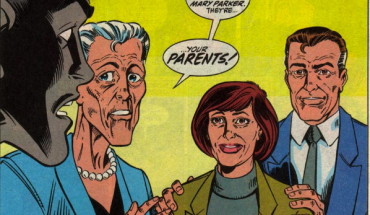 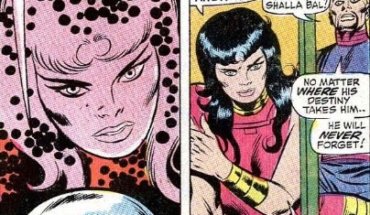