Fabian Stankowicz, the Avengers’ tech guy, is taking street drugs that make him lose a lot of weight and become paranoid, so Cap decides to take on the drug war.

While blowing up a drug den, he accidentally inhales a bunch of the same drug (called “Ice”) that makes him act weird, too. 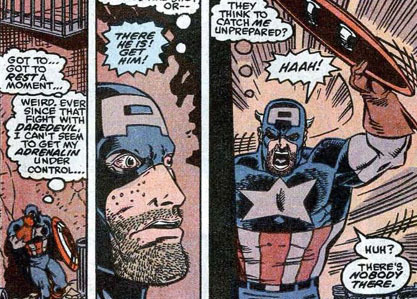 He’s off-character for this entire story, paranoid and aggressive. 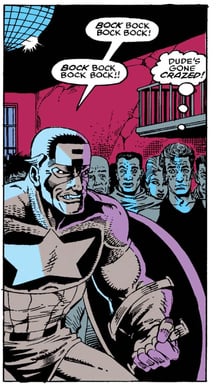 And does chicken imitations. 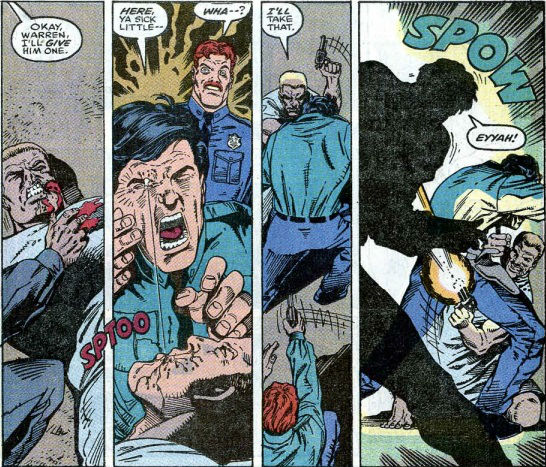 Meanwhile, Bullseye escapes confinement by knocking his own tooth out and using it as a weapon (neat!).  Then Kingpin hires him to look into the drug den explosion caused by Cap because the drugs belonged to someone else who was using Kingpin’s stash house. This is the first time Cap fights Bullseye. And where there’s Bullseye, there’s Daredevil.  Cap’s all hopped up on ice so he and DD fight–both physically and metaphorically.  Interestingly, though, this is the opposite of the way these things usually go.  Usually, the heroes fight then team up.  But this time… 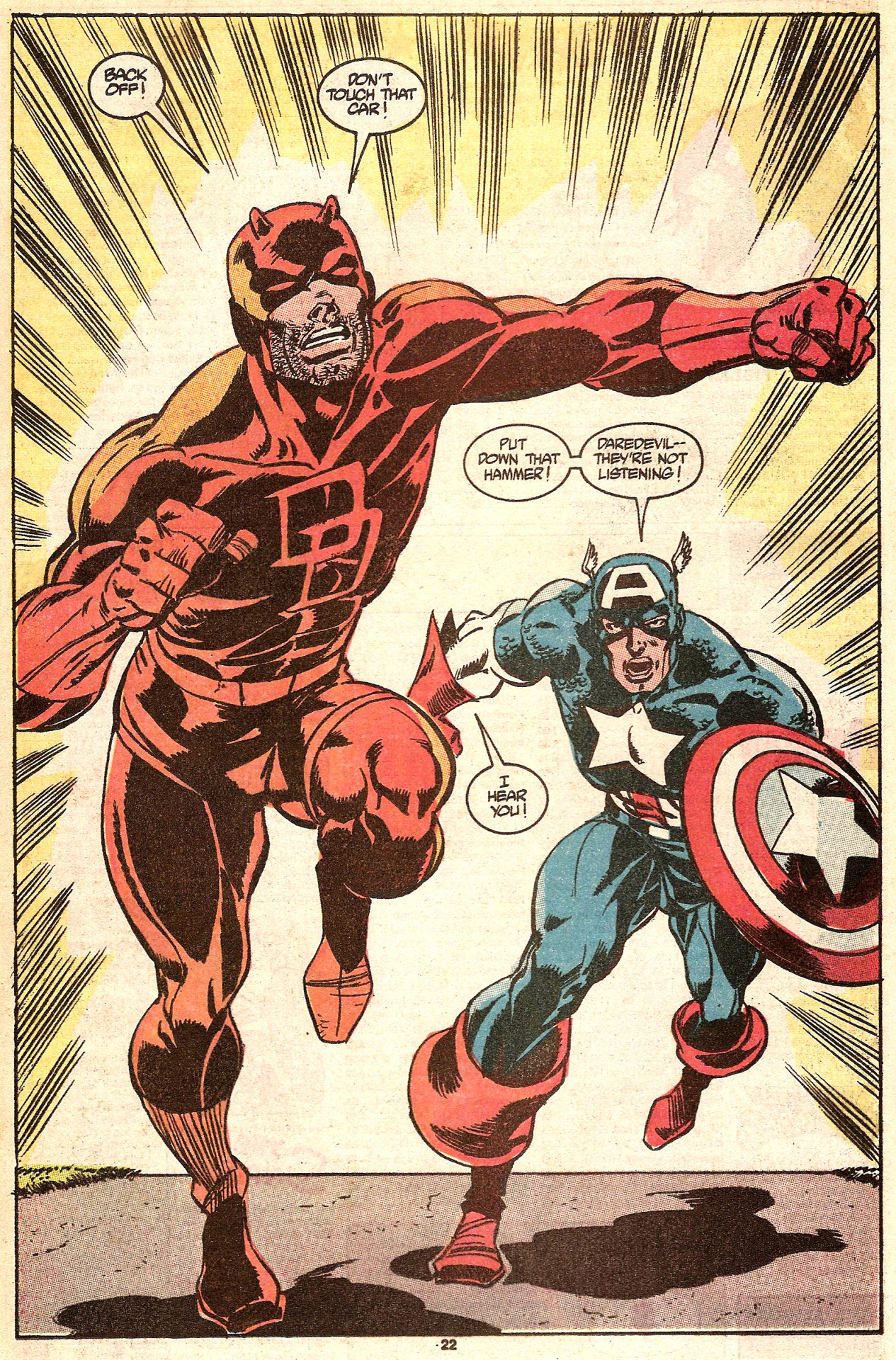 They team up and then fight.  And when they do, Cap knocks Daredevil out and then Crossbones, who has been stalking Cap, finds DD’s unconscious body. 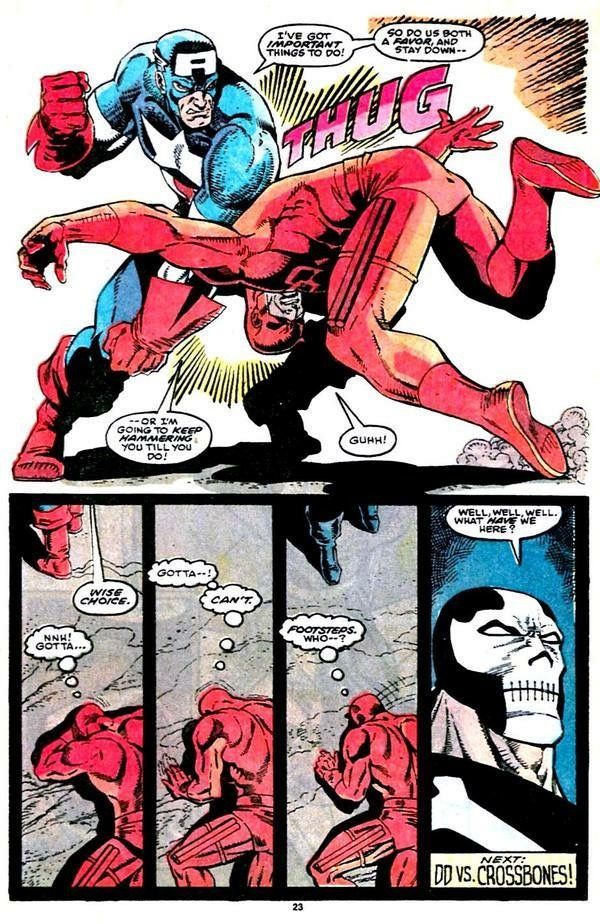 It’s ridiculous he’s never heard of Daredevil, but it’s even more ridiculous that when trying to guess what “DD” stands for he doesn’t think of Doo Doo.

Daredevil #283 directly ties into these events—but also have something significant for Daredevil as he dumps his crew of Inhumans and Number Nine the Sex Slave.  Between that and his moving back into Marvel mainstream by teaming up with Cap—and in a street-level drug battle at that—it appears that Ann Nocenti’s very weird run may be coming to a close?

Anyway, Crossbones was sent by Red Skull to try to kill Kingpin for reasons I’m not sure I follow, and Daredevil wakes up and protects Kingpin because Typhoid Mary was out of the room.  After the attack, Kingpin sends Bullseye to assassinate Red Skull.  He actually succeeds, but it turns out it’s just a Red Skull robot.  Then Bullseye and Crossbones fight, which was pretty cool.

Lots of good fights in these issues.

Seems like this could have been a neat crossover with Daredevil, but Ann Nocenti’s run has such tightly planned continuity I’m betting it was impossible to do. 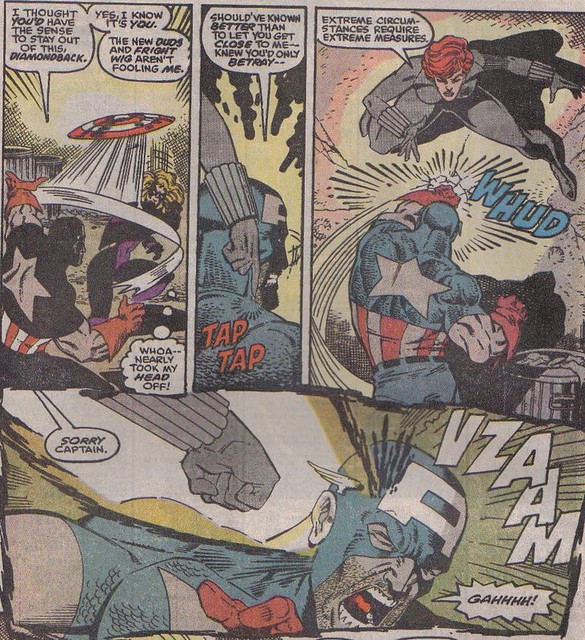 Meanwhile, Cap’s kinda-girlfriend Diamondback and the Avengers’ pilot John “Man Wolf” Jameson are trying to figure out what’s going on with Captain America being so weird lately, and Jameson seems to be falling for Diamondback.  Black Widow hooks up with them, they find Cap beating up drug dealers in an alley, knock him out, and help him detox back at the mansion—with the aid of Hank Pym, who is a doctor so naturally he can do anything: Design shrinking gas, build powerful robots, provide blood transfusions…

We’re supposed to believe after the transfusion that Cap no longer has super serum in him.  That will be the party line for a while, but it’s silly because he’s still buff as hell.  And it’s ridiculous that at the end he refuses to get re-injected with the super soldier serum because it’s a drug and this is an anti-drug story.  (And also I thought the serum recipe had been lost and that’s why there aren’t lots of Captain Americas running around?)

With Cap out of the way, Red Skull and Kingpin strip to their underwear and fight for several pages. You have to love that sound effect.

There’s a big fight at the end with Cap beating Crossbones without his super powers.

These issues also feature a Battlestar back up story that is bad and not important enough to cover here.