The story that put Peter David on the map, and one of the greatest Spider-Man stories of all time.

Captain Jeanne DeWolff was created by Bill Mantlo back in 1976 in the pages of Marvel Team-Up.  She stayed as a fringe character for quite some time, until she graduallly made her way into the various Spider-Man titles, so it was a big shock to the Marvel Bullpen when Peter David’s story ended up rocking the fanverse.

I mean, even Spidey’s own reaction wasn’t all that intense.  “Oh.  Crud.”  Not even an exclamation point.

The death of Captain DeWolff was actually only part of the story. 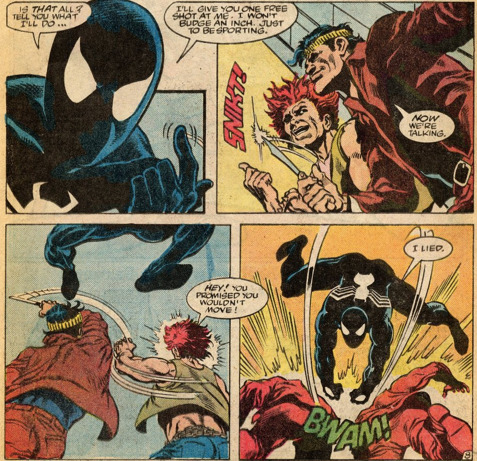 The comic was really about vigilantism and responsibility.  Daredevil has as much as Spider-Man to do with this story.  In this scene, at the end of the first issue, Matt Murdock hesitates to preserve his own secret identity and, as a result, a judge is murdered. Two issues later, Murdock pauses again–he recognizes the heartbeat of the killer at the Judge’s funeral and, again, waits too long to act so can save his own secret.  Very unheroic behavior.

I don’t know if it was Peter David or artist Rich Buckler (who turned in career-best work on this, with wonderful inking by Brett Breeding), but the street vigilante theme was humorously illustrated by a guest appearance by Charles Bronson.

Another thing about this story: It was dark.  Much darker than anything Spidey had done before.  But Peter David, who is a genuinely witty and funny writer, was able to strike the appropriate balance here: This wasn’t just turning Spider-Man into (yet another) Frank Millerish, neo-realistic, violent and sad book.  This was a change in tone from the optimistic, fun-loving tone of the 1980s to the more cynical 1990s.  People were critical of the book at the time for this–because Spider-Man was a comic you could go to in order to get away from all that.  But, at the same time, it was so well done that the change seemed inevitable and appropriate.

The killings prompt a wave of vigilantes across the city…. In fact, my only complaint is that the story was too compressed.  I would have liked to have seen more character work, to watch it develop over a couple more issues–especially the impact of the events on “normal folk.”

And nobody remembers this story for the true impact it had on the Marvel Universe.  Again, Jeanne was not a well-known, or even greatly used, character.  Her death didn’t change the world by much.  But this did: Yes, this was when Daredevil and Spider-Man learn each others’ secret identities, showing growth in Daredevil whose efforts to keep his secret actually led to several of the deaths in this series.