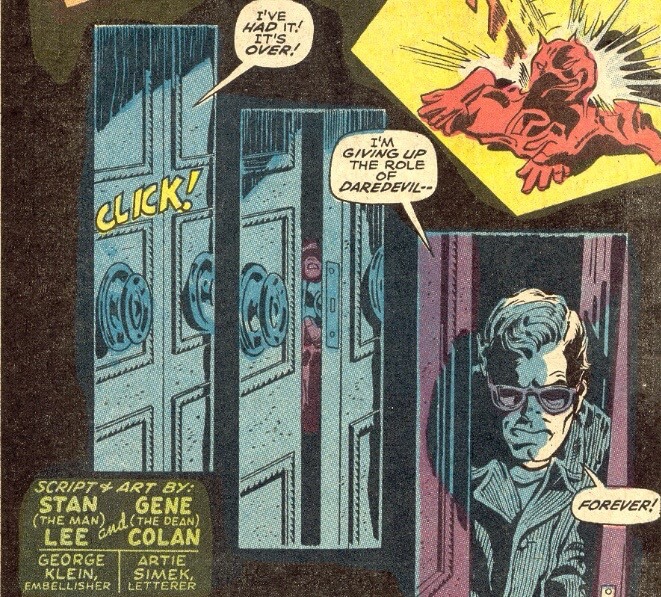 This is a long-form story against a villain Starr Saxon who starts out as a robotics expert, then in this same arc becomes the second Mister Fear, then dies, and then has his consciousness restored into one of his own robot bodies.

Let’s start with a few themes: About the same time that this story began, Mandarin discovered Tony Stark was Iron Man (in Iron Man #9), and Captain America gave up being Cap (albeit by dying).  This storyline begins with Murdock, lovesick over Karen Page and angry that Foggy broke up their partnership, quitting being Daredevil.

But no sooner does he throw his costume down in anger than a giant robot shows up at his door and knocks him out cold. 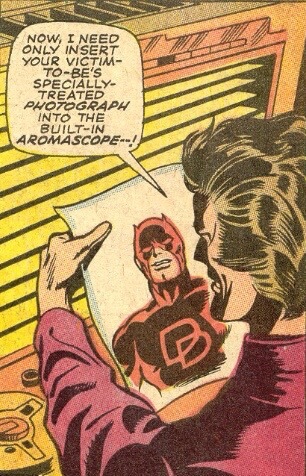 But I get ahead of myself. 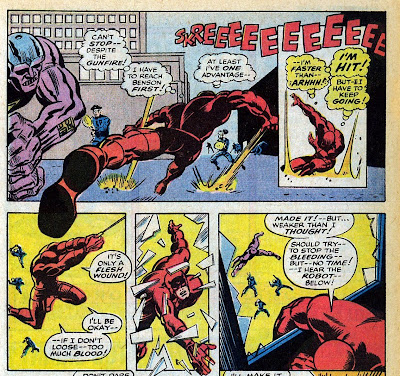 Saxon is hired to kill Daredevil, and in the process of using his robots to begin the killing process, he ascertains DD’s secret identity using science.  (Look at the great art in that fight sequence above!)

Saxon figures out a way to douse a photograph with biometrick information (via an “aromascope”), which enables the robot to identify Daredevil in his secret identity and, thus, Saxon now knows that Murdock is Daredevil.

But what’s even more interesting, it’s not just the villain who finds out-Karen does, too. 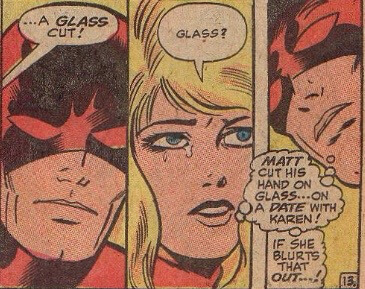 So we start with a hero fed up with how his secret ruins his personal life, and now both his enemy and his friend know his secret. 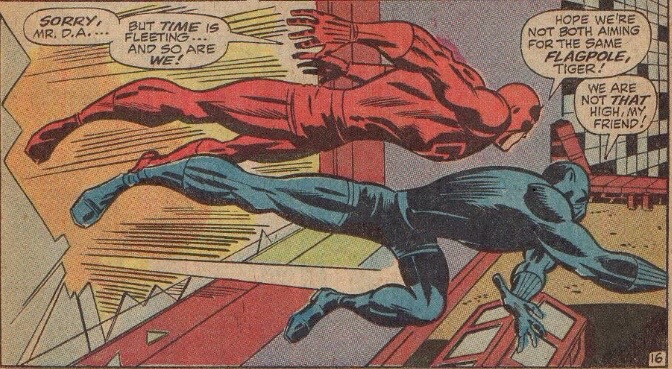 Along the way, Black Panther stops by. 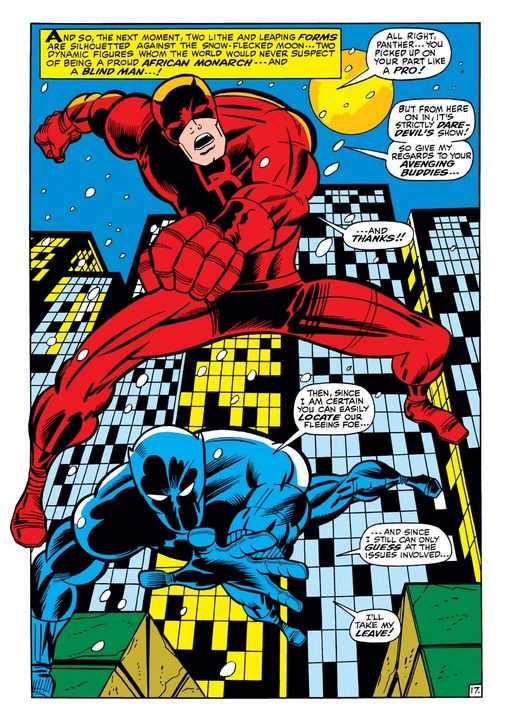 There’s not much of a reason for him to be there, but this is the first time they meet and there’s some interesting parallels between their costumes.  In particular, a night sequence where you see Panther in silhouette and at first you might mistake him for DD.  Panther and DD will have a long and prosperous bromance–and at one point, T’Challa even takes over Daredevil’s own comic.

A very nice, highly recommended run. But I digress.  Back to the terrific Black Panther art. 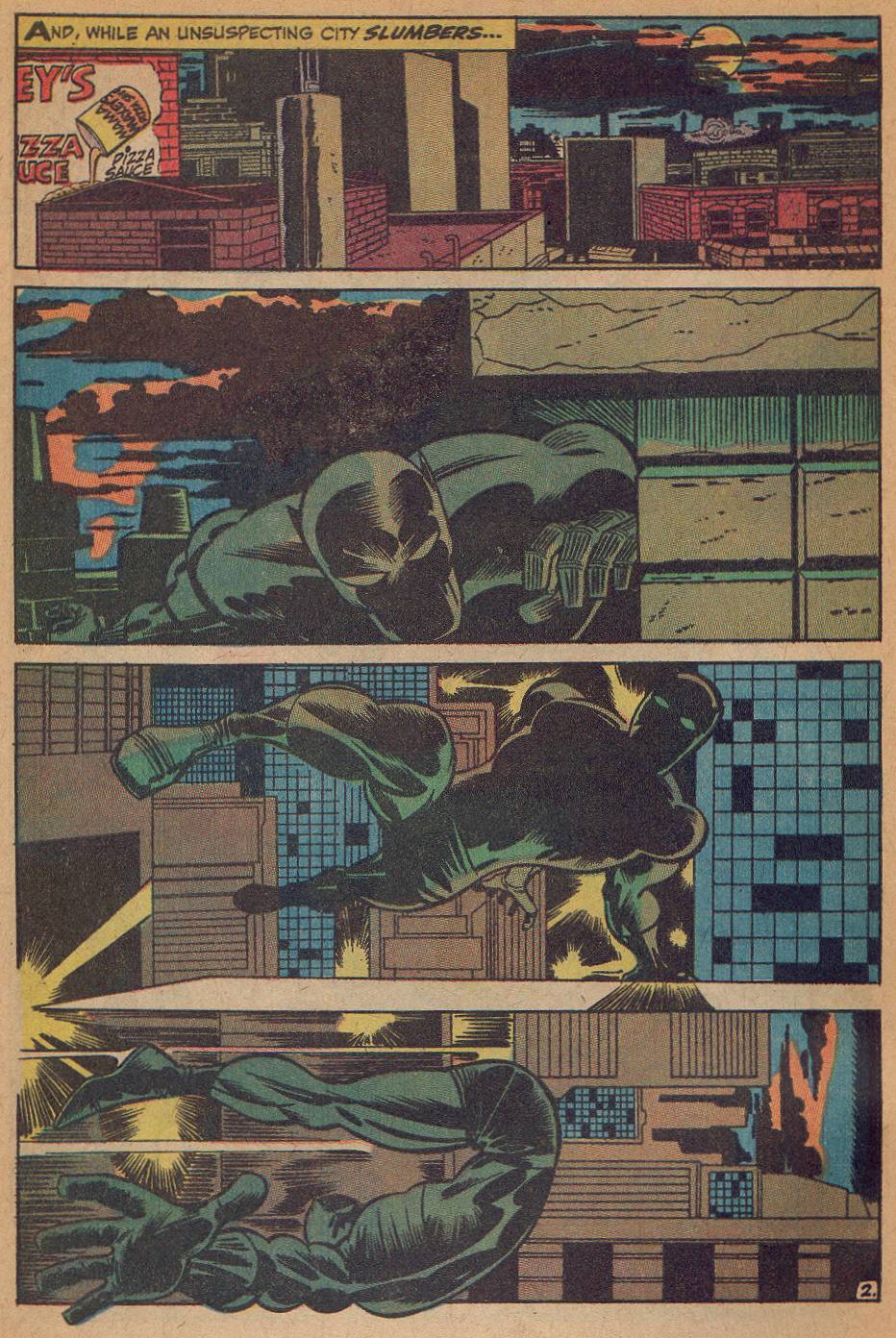 Starr Saxon now knows DD’s identity, and therefore Matt Murdock’s existence is a threat to his friends’ lives.  Yeah, we’ve seen this many, many times throughout DD’s history–but this was the first time.  So Daredevil does the only thing he thinks he can do…

He decides to jettison the secret I.D.  Good idea, but we all know it doesn’t stick.

While he’s “dead,” he has a brief interaction with Spider-Man–who also knows his secret identity.

Next, Starr Saxon takes on the identity of Mr. Fear and scares Daredevil. This makes him the second Mr. Fear.  Rather ingeniously, he rigged Daredevil’s Billy Club so that it would trigger the fear effect whenever Daredevil used it.  But of course, DD figures that out and we get the big final fight, wherein Saxon “dies.” 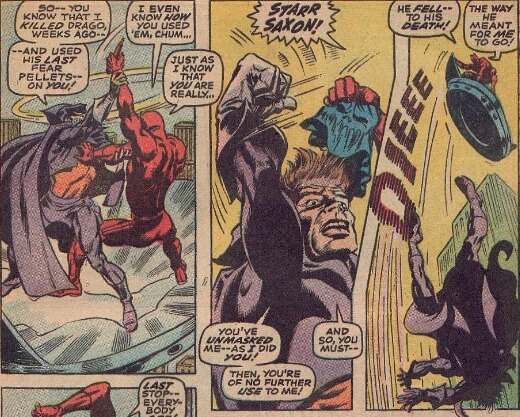 I’m tagging this as one of the times DD let’s a character fall to their death.  Technically, that’s not what happened here–it appears Saxon falls completely by accident–but it is interesting how many times Daredevil’s foes fall to their deaths.  Much more frequently than any other character.  Smells fishy.  Maybe if I could spray Saxon’s aromoscope spray on the panel above I’d learn whether the fall was truly accidental.

This ends the Starr Saxon story, and the character “dies” on the last page, falling from a great height on to the concrete below.  But he doesn’t stay dead.  Many years later, we’ll learn that his loyal robots retrieved his body and were able to transfer his consciousness to one of his robots before he actually died.  (That’s in Marvel Two-in-One #47-48, and it’s a pretty tortured way to revive a character everyone had forgotten about anyway.)  As far as I know, it’s never explained why Saxon doesn’t remember Daredevil is Matt Murdock when we next see him in 1979.

Thus, the only lasting event of this storyline is Karen Page knowing Matt is DD.

During these issues, the writing shifts from Stan Lee to Gerry Conway.  The writing on these early Daredevils, as I’ve said before, isn’t really great for a noir-hero.  But we get really amazing art, with page design that was innovative for it’s time and great uses of dark and shade.  I see Colan’s art as what shaped this series for folks like Frank Miller, Dave Mazzucelli and Klaus Janson later on. 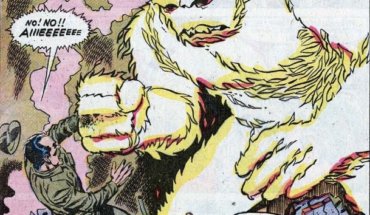 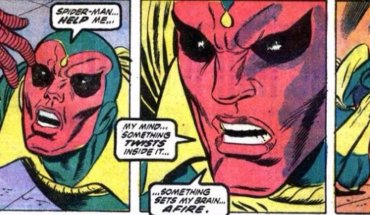