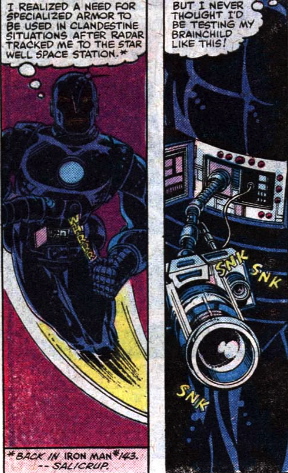 We don’t get to see him put it on though. That’s reserved for the regular armor. Bethany Cabe is captured and held as a spy by the East German government, so Tony creates an all-black stealth armor suit to break international law and save her.

This is one of the few suits of armor that isn’t red and yellow.  It looks cool AF.

When he arrives to save her, changing into the garb of an East German army general, he learns that Beth got captured on purpose and he’s screwing up her operation.  She’s the second redheaded female spy in the Marvel universe, and since we aren’t hearing much from Black Widow, I guess that’s fine.  We also learn that she’s known he’s Iron Man for a long time.

In the end, we learn that Bethany was there to look for her husband, who is still alive, so she breaks it off with Tony.  Poor little rich boy, always getting his heart broken.

While Iron Man tries to protect her during her exfil, Living Laser shows up. He’s working for East Germany.  And he has a new power:

If I wasn’t so lazy, I”d pull out my copy of Amazing Spider-Man #230, “Nothing Can Stop The Juggernaut,” in which John Romita, Jr., has this same drawing of eyes on Juggy.  I remember because it’s so weird how the eyes stick out of his body and mask.  But I am lazy, so you’ll have to trust me. 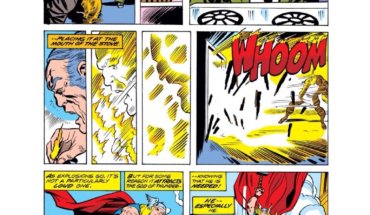