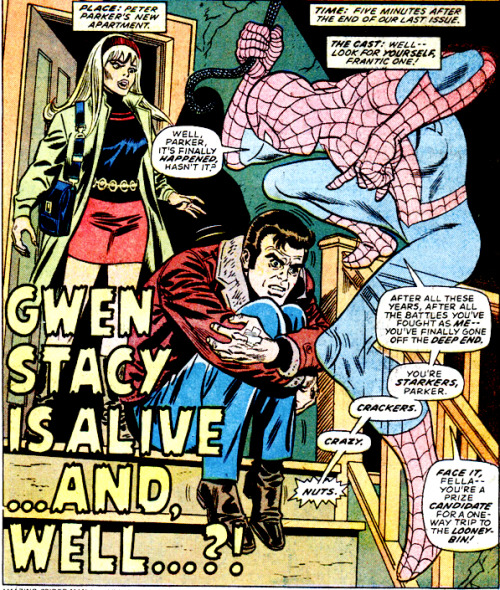 When most people think “clone saga,” they’re thinking the godawful 1994 story that eventually I’ll have to re-read as part of my commitment to this ongoing blog feature.

But the first saga was in the 1970s, when The Jackal took tissue samples from Gwen Stacy and Peter Parker (while he was just a regular professor and hadn’t yet gone green) and then used them for his own evilness.

It all started with Gwen Stacy showing up out of nowhere, and gradually unfolded. 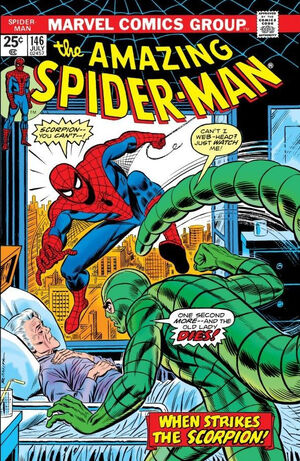 Peter is suspicious, naturally, so he gets Gwen’s DNA checked.  She’s a match!

There’s also a sequence where Scorpion, who is working for Jackal, shows up at Aunt May’s hospital bedside and then starts trashing the hospital.  Jackal also hires Tarantula.  It might have a been a cool “all the spiders” concept, but it’s really not all that great.

When Jackal’s whole cloning thing gets revealed, we learn Jackal is Professor Warren, who loved Gwen like a daughter and blamed Spidey for her death.

Spider-Man ends up fighting himself…

Interestingly enough, it doesn’t end with another death of Gwen Stacy–which would have been a cool ratings grabber.  Instead, Gwen goes off into the sunset.

It’s actually Professor Warren who dies, or at least seems to.

The big wrap up issue is where Peter doesn’t know if he’s the real Peter or clone Peter, and he follows his heart to the answer rather than rely on stupid stuff like DNA testing.

This WILL bite him in the ass later.