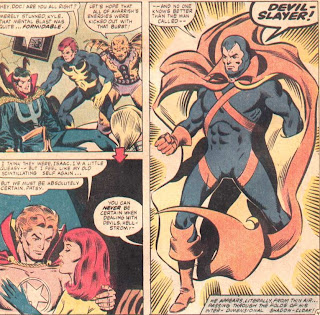 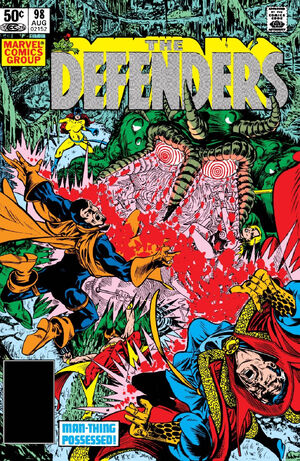 It’s time to end this Six-Fingered hand thing. It’s not terrible, but it feels like a loose “theme” that is unnecessary to tie all these issues together. Anyway, in #97 the Devil Slayer returns.  His ex-wife has joined a cult that worships the 6-Fingered Hand, and he wants The Defenders’ help to free her.  They do, and it leads to a battle that brings in Silver Surfer and Man-Thing.

And a Marshall Rogers cover!

The story itself is pretty convoluted and confusing–and really it’s not necessary to dig into all the twists to enjoy the story.  There’s something about the way J.M. writes these characters that’s just fun to read.

It’s like when The Avengers is really good: The team dynamic, the ability to jump around between characters–a big team book can be terrific.

(The Avengers make a very brief cameo in this tale, by the way, just to say they’re too busy to help.)

It turns out Mephisto is also struggling with the Hand, although The Defenders don’t really believe him…

In the build-up, Marvel changes the logo to expressly include the guest stars in #99, as we head to the big reunion in #100…

All the original members show up for #100, including Hulk and Namor, which allows for nice big spreads like this…

Incidentally, the merging of devils and Mephisto and the six-fingered hand happens in…Rutland!  Remember their Halloween parade?  Hit the tag below if you don’t–it’s very cool. The above sequence illustrates why comics in the 1980s can beat up modern comics: The Devil “tricks” The Defenders into cheating in order to try to defeat him, then makes a speech and gets swallowed by the sidewalk in front of a showing of The Devil In Miss Jones.

Look at this group shot… It made me hope they’d stay together, but of course they don’t.  Especially Hulk… But Hulk!  Wait!  Beast is arriving in three issues!

Creators: DeMatteis and Perlin
Grade: B-