Widely recognized as one of the top 10 Avengers storylines of all time, This is where Steve Englehart really gets to go nuts.  It begins with Swordsman helping the team fight Kang and ends in Giant Sized Avengers #4 with Vision and Scarlet Witch getting married.

Englehart arrived at Marvel after a stint with DC where, for the Justice League of America, he wrote about a green chick named “Willow” who was described as a human who went into out space to have a child.  So she was a “space mom,” or, put differently, a celestial madonna.

Then he kind of brings her over to The Avengers as “Mantis” and tells the same story.

Neat, huh?  And the Marvel editors had no idea what he was doing.

Overall, this sprawling epic (it also included Giant Sized Avengers #2 and 3) told the origins of Vision, Moondragon and Mantis, and had some of Sal Buscema’s best Avengers art. It spans several time periods, including the World War II Human Torch (who was the pred 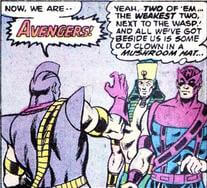 ecessor of Vision) and the future (Kang!), and is the kind of “big” story that The Avengers was intended to tell.

As for the story itself, this may be most complicated storyline ever not written by Grant Morrison.  I’ll try to hit the high notes here, but it’s almost impossible to summarize it because every page has something important.

It starts with Kang snatching all of the Avengers except Swordsman, who follows them, with the help of Agatha Harkness, into the past–ancient Egypt–where he finds Rama Tut.  Who, until now, we all thought WAS Kang.  And he is. But apparently they can fight each other, which they do.

Hawkeye comes back just in time, and Swordsman informs him that they are the only two Avengers not captured by Kang.  Showing uncharacteristic humility, Hawkeye recognizes that he and Swordsman are the lamest Avengers.

Kang really just wanted Mantis, who according to prophecy was destined to become the Celestial Madonna, whose husband, in turn, was prophesied to be the most powerful man of all time.  Naturally, this makes Kang want to get married.  But when he is losing the battle he decides to kill her rather than let anyone else have her, but Swordsman saves her and dies in the process.

And speaking of dead guys: Immortus and Kang team up to revivie a whole bunch of dead dudes to help forward his agenda.  They call them The Legion of the Unliving. 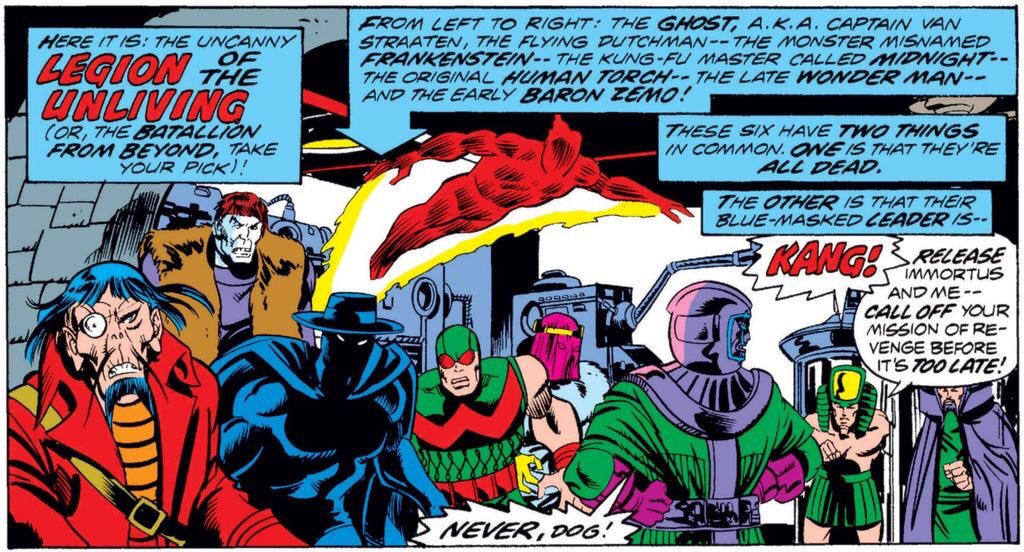 This was basically the first version of the Legion of Monsters.

Way back in 1942, Marvel Mystery Comics featured the Legion of the Dead/Legion of the Undead, which was basically a team of gravediggers who used zombies to protect themselves/fight crime.

But this version has nothing to do with that old version.  It’s just kinda neat.

The Legion of Monsters came about in 1976, with an entirely different lineup than what we saw in Avengers #131. 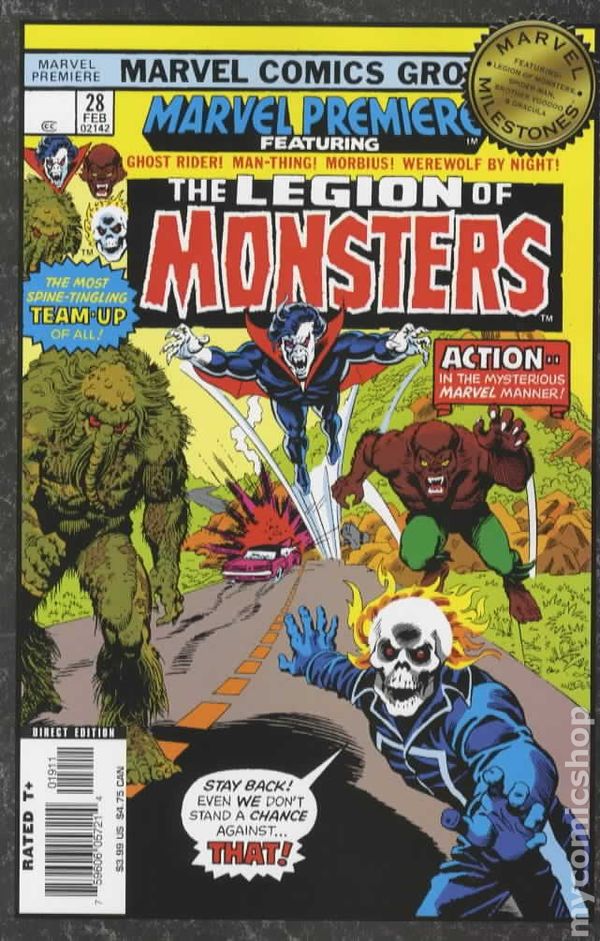 I loved these guys.  But then, I also loved their most controversial iteration….

I’m one of the few comics bloggers who speak out in defense of Frankencastle every chance I can.  These are comic books.  If you can’t take risks with the genre, and blow shit up, you’re not doing it right.

Here’s what I said about it a long time ago, on my other site:

I know that the idea of Punisher becoming a monster was ridiculous but Frankencastle is one of the unsung heroes of 2010 in my book.  The fantasy of the story was no more fanciful than the pseudorealistic over-the-top violence of Garth Ennis’ run on the character, which is widely regarded as the best Pun-run of all time.  It’s comic books people.  It’s supposed to be fantastic, fanciful, and unrealistic.  That’s what makes Jonathan Hickman’s S.H.I.E.L.D. so cool.  You can’t tell me you can’t accept Frankenpunisher but you can accept a radioactive spider?  I hope superhero books stay super and take risks, like Rick Remender did with Frankencastle.  If anything, he might have stayed at the party too long (the story arc could have been abbreviated by a few issues, and the drawn out Dakken arc didn’t amount to much of anything) but that’s the execution, not the idea.  The idea—to revive the legion of monsters and to make Frank Castle do something other than take pot shots at drug dealers—was fanfrickintastic.  Same thing with Red Hulk, by the way.  The first 7-10 issues of that book were incredible, ridiculous, glorious violence. It deteriorated as it went on, but again—that’s execution, not concept.  I want more of that.  More super stories, less attempts to make superheroes “real.”  If I want “real” I’ll stare at my dwindling bank account.

Back to the Celestial Madonna saga: During the battle, Vision gets damaged.  But not by Wonder Man.

Anyway, he gets fixed by being transferred to the body of the original Human Torch, who, along with Frankenstein, switched sides from Kang’s Legion of the Unliving to help The Avengers…

Oh yeah, and along the way Ultron got involved.  We get a detailed origin of Vision, so we see Ulton in the past putting Simon Williams’ brain patterns in Vision’s Human-Torch body.

We also learn that not only are Kang and Rama the same person, but Kang also later becomes Immortus.  So now the same guy is fighting himself three times.

And Moondragon fights Scarlet Witch, and we learn that Moondragon was raised partly by Thanos, and shares a lot of common past with Mantis.

See what I mean by complicated?  It kind of sets the standard for the history of the Marvel Universe.

…against lots of cool villains.

Oh, and developments in the life of Scarlet Witch, who finally gets a tutor for the “magic” side of her powers…. 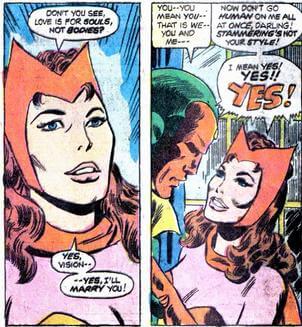 That’s right, Agatha Harkness–Franklin Richards’ nanny–teaches Wanda to do what Xavier never could: Master her random hex powers.  This gets Dormammu’s interest.  Yes, Dormammu.  Just about everyone makes appearances in this story.

And I can’t forget to mention that, since Mantis is having her big adventure, Vision figures out he really does want Wanda and proposes to her…

And Mantis marries Swordsman.  What?  But I just said he was dead!  Yes, he was.  But his ghost comes back and gets reanimated by a tree.  And then she and her ghost husband float away forever.

Remember, this story was written by Steve Englehart.

You can buy the whole saga in a large trade paperback, and I suggest you do.  I’ll end on this: 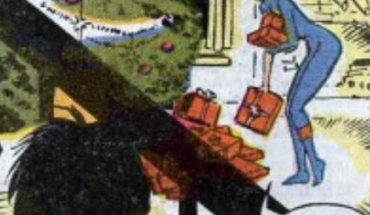 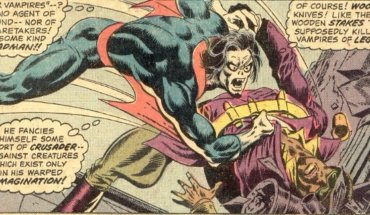