If I were to list my favorite Marvel series to read end-to-end, Peter David’s long X-Factor run would definitely make the list.  And yet, I had no idea that he didn’t invent Strong Guy.

In this issue, a group that makes mutants fight mutants in arenas, The Gladiators, kidnap Sunspot and Magma, and Magik and Cannonball go on a rescue mission that takes them to Los Angeles.  Lila Cheney lives there.  She’s a mutant who we first saw in New Mutants Annual #1, who is the lead singer for Cats Laughing and an interdimensional thief who tried to sell all Earthlings into slavery just to prove she could.  That all happened in the annual, apparently, which I don’t own and haven’t read, and at the end of the story she ended up writing a song for Sam “Cannonball” Guthrie.

We also learn that Karma got really fat after Legion messed with her.

So that’s a long way to say that while they’re in L.A., they stop by Lila’s house and meet her bodyguard, who is Strong Guy. 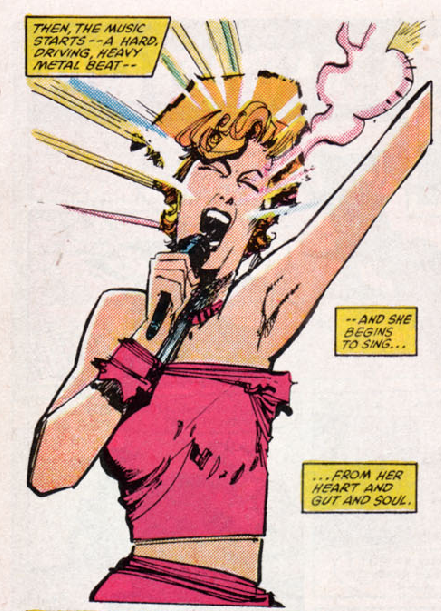 Dazzler also appears in this issue as a backup singer for Lila. 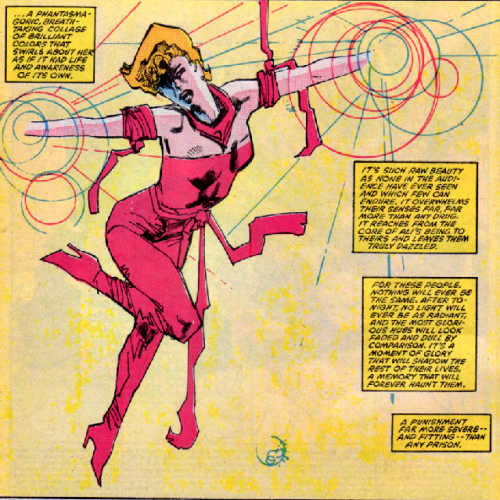 One of the best things about Bill Sienkiewicz’s art was that he made people look fascinating, without oversexualizing them. The story seems to be chugging along and getting into something kinda cool when The Beyonder contacts Magneto, who then pulls everyone out of the arena to go jump into Secret Wars II issue #1.  That’s the worst kind of “event” tie-in—one that totally disrupts a perfectly good story.  It’s also the worst kind because Secret Wars II is largely a bad comic.

Issue #30 continues from Secret Wars II #1, in which Beyonder pulls out Magik’s demon-self, causing her to teleport to Limbo along with Dazzler, Cannonball, Rachel Summers, and Kitty.  The team solves that problem, and then tries to alert Earth’s heroes that Beyonder is on the loose.

Then, we get back to the story that was interrupted at the end of NM#29, when Marvel editor in chief Jim Shooter forced Chris Claremont to stop his story and tie gratuitously into Secret Wars II.  And it truly was gratuitous.

So, the heroes go back to the gladiator arena and eventually free Magma and Sunspot.  Beyonder does show up again during that story to observe more about Magik’s demon-side, but it’s really not necessary or influential on the outcomes.

Creators: Chris Claremont, Bill Sienkiewicz
Grade: C.  The Secret Wars II tie in breaks the rhythm of the story, but honestly even without that this just isn’t one of the better New Mutant stories.

For the complete history of the MU, year by year, go here.
And see my Ratings of Runs on comics here.
ants stories.