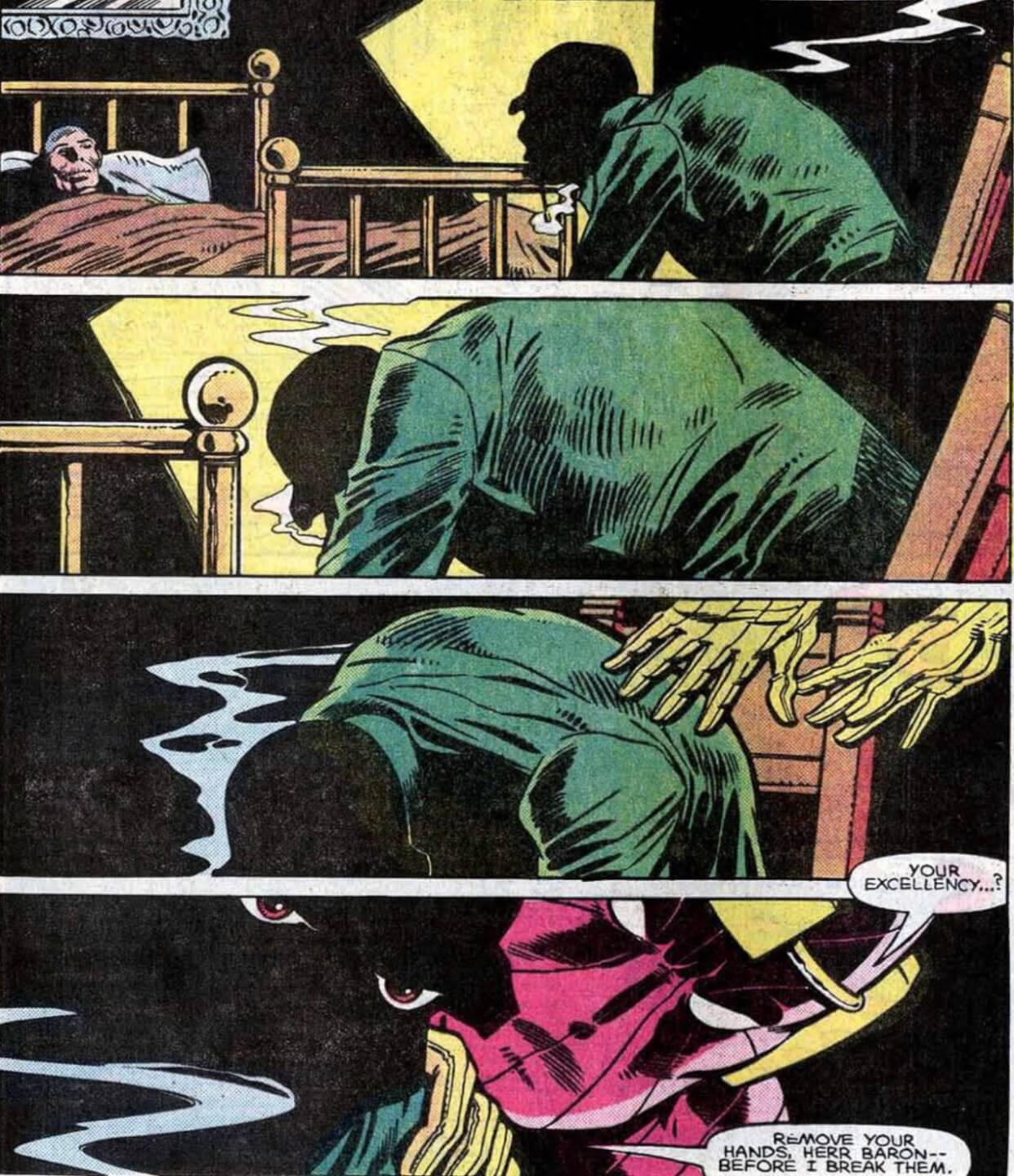 In the last arc, Captain America’s friend, pacifist Dave Cox, was kidnapped and nearly killed by Mother Superior and Baron Zemo.  This story starts with Cap at his hospital bedside, lamenting his friend’s injury.

Later in the same issue, we see Red Skull lamenting the passing of an old friend as well, racist manservant Horst, but instead of showing tears and sensitivity, he shows violence and rage.  Not to mention the fact that Horst died as a result of a beating administered by Red Skull himself. 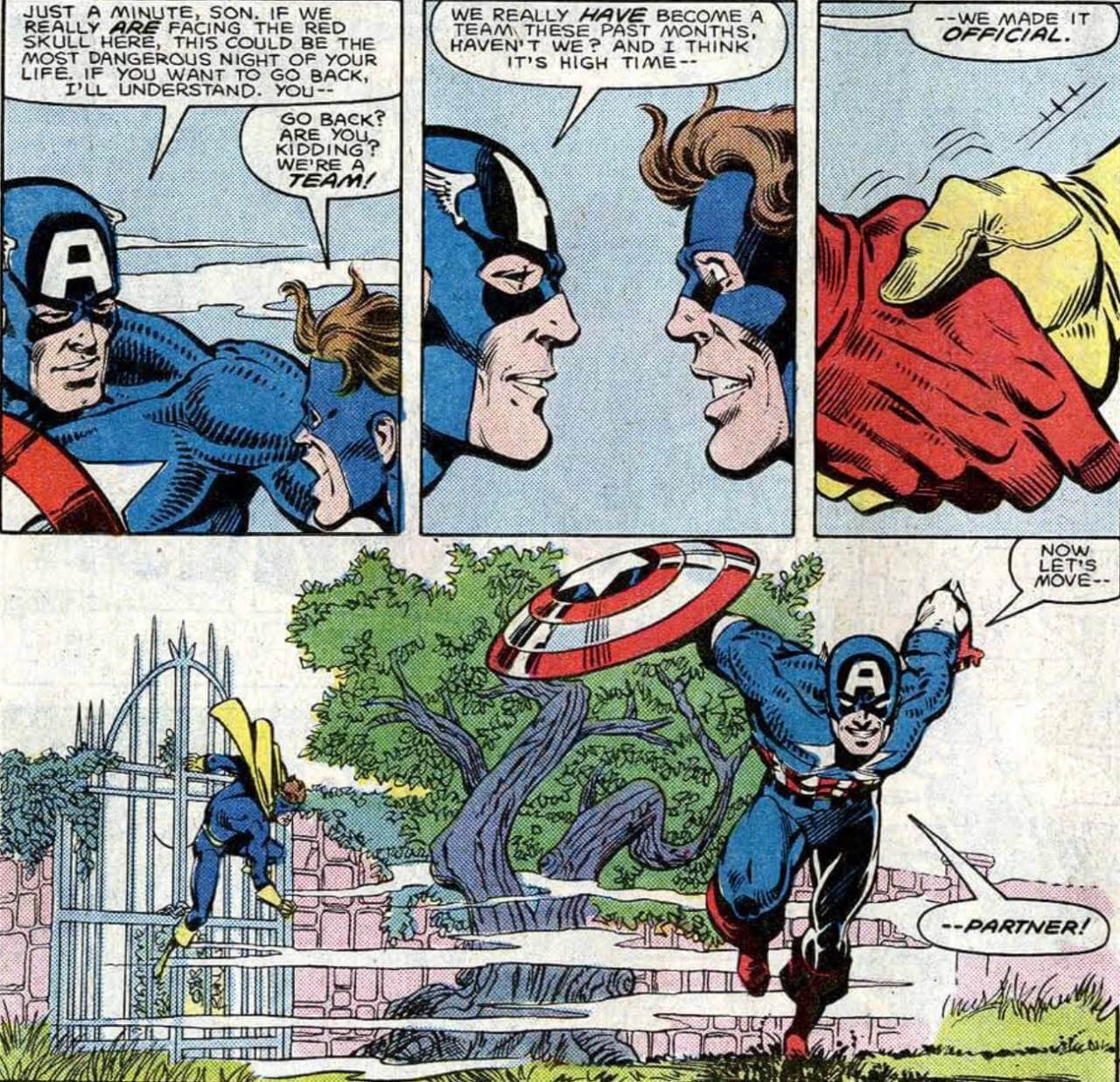 Also in this issue, Cap and Nomad have been having a rocky relationship to now.  Nomad keeps trying to prove himself and Cap keeps thinking he’s using too much force, but they finally cement their partnership.

Besides the character work on Cap and his arch nemesis, we learn that Skull’s daughter, Mother Superior, has her own spin off line: The Sisters of Sin.  And they kidnap Cap’s fiancé, Bernie.  They also kidnap Arnie Roth and use him to trap Cap and Nomad.  And they put him in make-up and make him do stuff…It’s kinda creepy.

I like how this story is a full-on onslaught against all of Cap’s associates.  It’s weird that no villain has tried this kind of approach before: Don’t just kidnap one friend, get them ALL.

Once captured, Zemo exposes Captain America to an aging gas—which works because Nomad was brainwashed into tricking him into digesting a chemical that reversed his super soldier serum.  Nice touch. 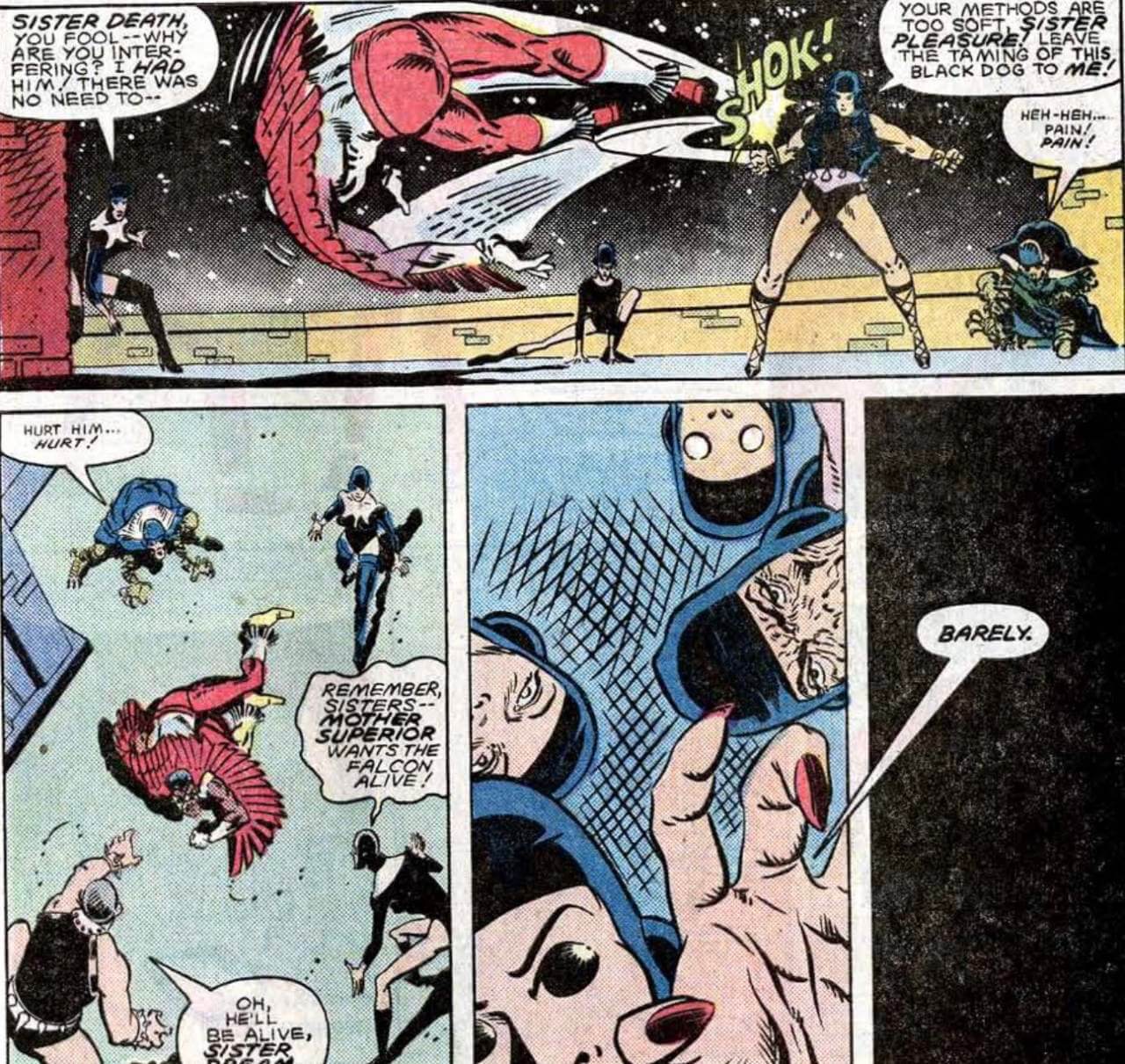 Along the way, Falcon tries to help but also gets captured by the Sisters of Sin.  At this point, it’s a fair question to ask: If Skull can capture everyone, why doesn’t he just kill them all?  Answer: It’s complicated.

Apparently, Red Skull wants to fight Cap mano-a-mano, only he wants to fight a version of Cap that saved Bucky during WWII, so he puts Cap into a dream machine where he relives the final moments of Bucky’s life, only this time he saves Bucky.  There’s a lot of friendship stuff going on in this big story.  All Cap’s closest people are kidnapped, beaten, etc., Cap himself is aged and tortured, and saved by his Avengers friends.

He also he replaces Bucky with Nomad only to then save Bucky—and Nomad betrayed him!  The writing is terrific in these issues.

So, now that Cap has “saved” Bucky, Red Skull unmasks and the old men can face each other. This is the first time he has ever been seen without the mask.

Unfortunately, we get a little too much of Red Skull’s backstory.  His mom died in childbirth so he was a motherless boy with a mean dad, he fell in love with a Jewish gal who didn’t love him back, blah blah. Really?  Can’t he just be a Nazi jerk?  Do we have to have some compassion for him?

He also says that Adolf himself brainwashed him and turned him into the megalomaniac he is today, which in my view makes Hitler out to be way more competent than he needs to be.  (Doesn’t he have people who do that for him?)

We also get more details about his daughter, Mother Superior, but those really don’t matter.  It’s a similar kind of thing, only we know the brand of asshole HER father was, since he’s Red Skull. 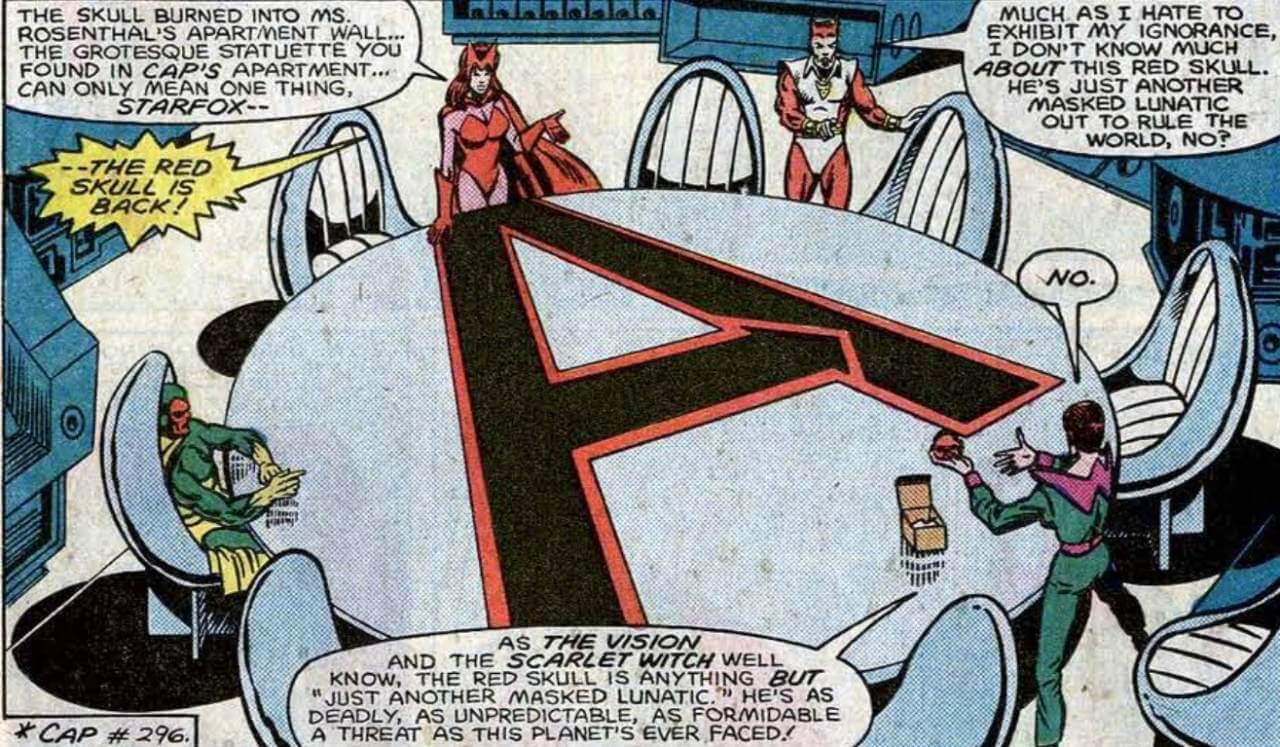 Inevitably, all the captured people and The Avengers all come together for a big battle, Cap’s aging is reversed, and Mother Superior kills Zemo in the big battle (for really not much of a reason at all, but she’s evil so why not).

Then old Cap and old Skull fight, Skull dies, and Cap gets healed. 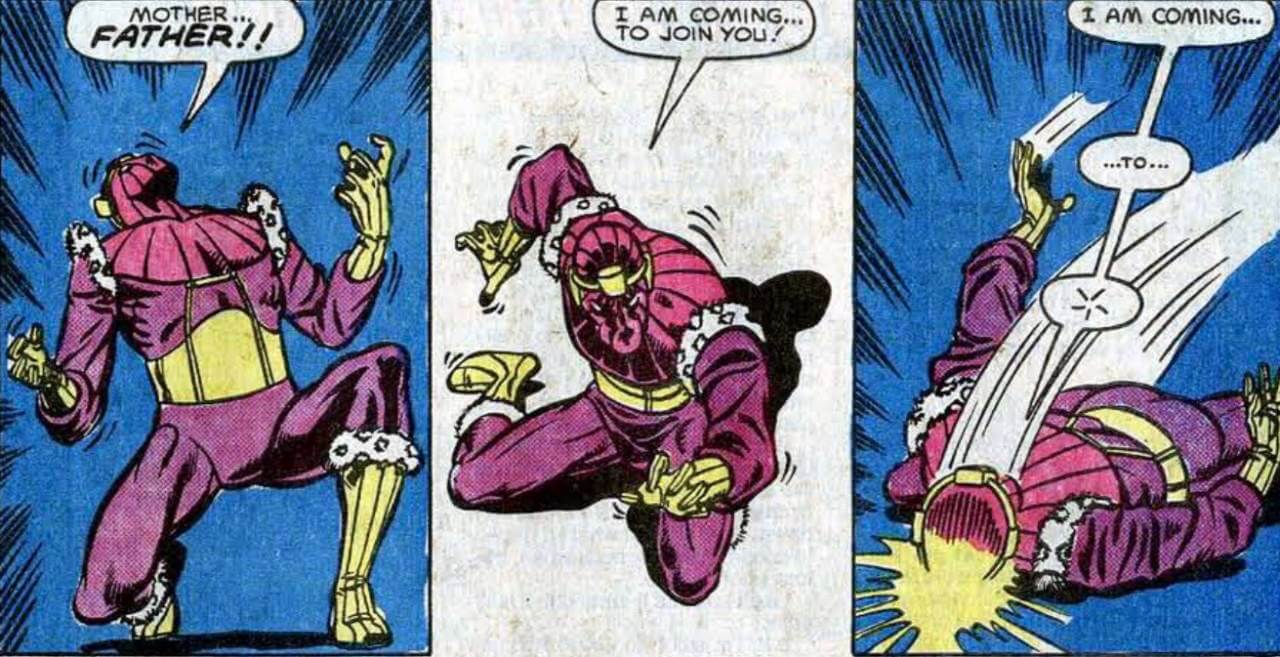 This is the end of JM DeMatteis’ run.  I know he has his detractors, and in many cases I agree with them, but I think his run on Cap was very strong and a big, complicated Red Skull story seems like a solid way to end it.

Creators: J.M. DeMatteis, Mike Carlin (#301 script) and Paul Neary
Grade: C+/B-.  I’m really on the fence, mostly because of the art.  If Zeck had drawn this, it would be a solid B probably. 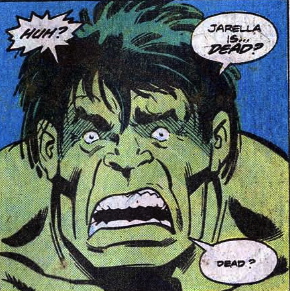 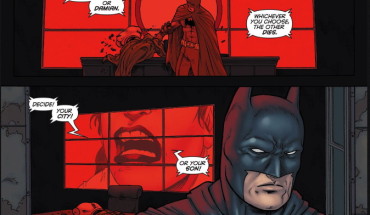