I just love this panel.  I wish I had a T-Shirt of it.

Continuing the search for Quicksilver, we get a story about Space Phantom-one of The Avengers’ earliest foes.

Phantom kidnaps the Avengers and takes a particular interest in Captain America.  He acknowledges the “identity” issues Cap has been struggling with in his own comic, and he mindwipes the world.  The whole world.  So, now Cap has a secret identity again-nobody knows he’s Steve Rogers.  Who knew he was this powerful!?

This is a flashback that retcons Cap for over 20 issues back.  Yeah, it’s a deus ex machina that is simply used to reboot the character for Steve Englehart, who writes both Avengers and Cap’s own book.

Meanwhile, Vision is wrestling with Grim Reaper’s invitation to put his brain waves into Simon Williams’ body.  Initially, he says “no,” but then, in the end, he says, “Yes.” 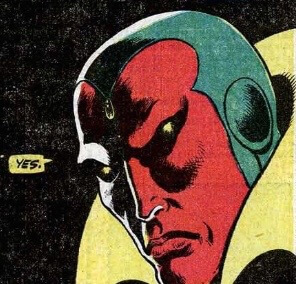 But that’s really just a trick, to enable him to rescue The Avengers from Space Phantom.  I’m omitting a lot of detail here because this is an extremely heavily plotted story-lots of text, lots of tell don’t show.  Not Englehart’s best work, but he’s clearly trying to set up the readers for a new and different version of these characters who had been around for about ten years, and were in need of a freshening up.

The best of all: Vision offering to console Scarlet Witch about her missing  brother (“I can offer my shoulder, if you wish it.”)  This is the real beginning of one of Marvel’s most fascinating romances.  It had started earlier, but this is where it begins in earnest.

And the Witch is becoming a badass. 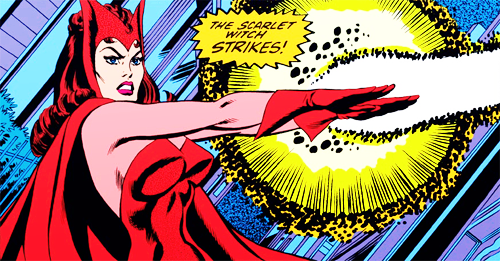 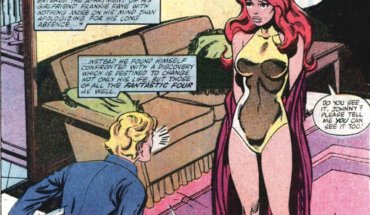 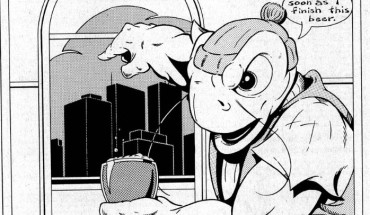