I know my reviews of books have been getting increasingly negative, but to be fair: Marvel comics are getting increasingly bad.  Chuck Dixon’s Moon Knight isn’t an awful comic per se, it’s just a band Moon Knight comic.  It disregards, actually completely blows up, all the careful character work that Doug Moench did with the character over the course of years in one of Marvel’s first direct market books and turns him into a generic hero. 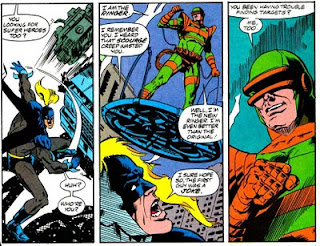 Last issue, he teamed up with Punisher and killed a villain.  This issue, he defeats Killer Shrike and a new version of Ringer.

Now, I love Ringer.  He’s stupid and fun.  So I tried hard to overlook the pain that this title causes me through its oversimplication and reductionist approach to one of my favorite Marvel characters.  For that reason, it’s a story graded slightly above average.