Here begins the first ever Jim Starlin cosmic saga.  It’s dense, full of heavy exposition, and introduces and/or reimagines some of the most enduring characters in Marvel’s cosmic line.  It starts on page one, with Drax the Destroyer, and then gets to Thanos before the end of the issue.

Iron Man is being beaten by Thanos’ henchmen, called The Blood Brothers, and Drax has been created by a “disembodied entity” called Kronos with the sole mission to kill Thanos.  We also meet Thanos’ father, Mentor, and his brother, Eros (who will later be known as Starfox). 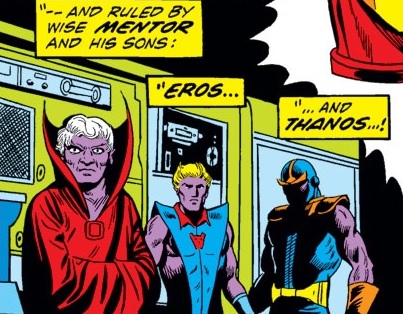 Because the enemy of his enemy must be his friend, Drax frees Iron Man from the Blood Brothers in an effort to track down their employer.  That’s where this issue ends, and it’s pretty self contained.  But the action moves immediately to Captain Marvel.  It’s weird that Marvel didn’t promote that fact in the pages of Iron Man #55.  It’s not like them to leave an opportunity for cross-promotion on the table.