No sooner does Hulk get amnesty and Banner’s brain than The Leader comes in and wrecks it all. But at least he gets reunited with his old team.

It starts with Leader sending a punch of pink doughy “humanoids” to crash Hulk’s date with an alien birdlady.  Then, he pours win on Hulk’s head. Hulk is now hanging out with his cousin at Avengers mansion.  The old Arsenal robot attacks.

There’s really no reason for this other than to break up the “talkie” sense of the book.  Remember, Hulk is traditionally just a “beat the crap out of everyone” book, so having long talks between Hulk and all his old friends is a big change. 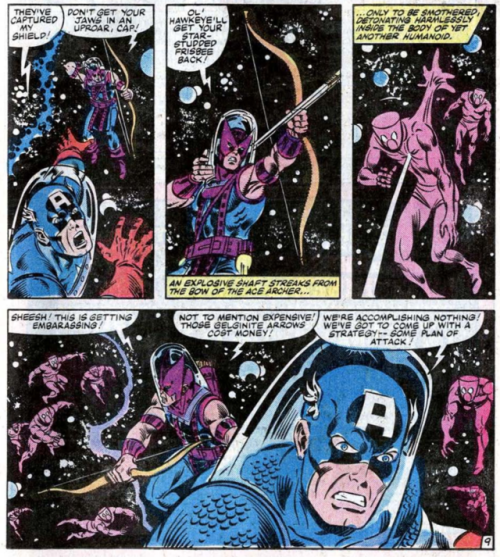 Then there’s a big pointless time travel adventure (Leader has a time machine), which ends with Leader falling in a hole after trying to make the entire world look like him–green with an elongated head.

The Avengers offer Hulk full-time membership at the end of all this, but Hulk says no.

Creators: Sal Buscema and Bill Mantlo
Grade: C+
For the complete history of the MU, year by year, go here.
And see my Ratings of Runs on comics here.