Captain America gets the brilliant idea to say that there is no such thing as a West Coast/East Coast Avengers.  And there’s no such thing as a retired Avenger.  Anyone who has ever been an authorized member of the team carries a card and can assemble at any time.  (Note: No Hulk appearance because he’s “undercover” as Mr. Fixit.)

It’s the opposite of every single lineup change before now, which were always about keeping membership to a specific number, either because the U.S. Government would only authorize a certain number or because they only had so many chairs around the “A” table.

This means three out of four Fantastic Fours are on the team.  No Johnny Storm.  Thing, who is at this time stuck in Ben Grimm form, notes that he “joined” the West Coast Avengers—but really he was just asked to join and rejected them to go wrestle.  But he was part of one adventure, and that’s enough to count.  I mean, Hank Pym sold out the entire time to Egghead and went to jail, and he’s still in. 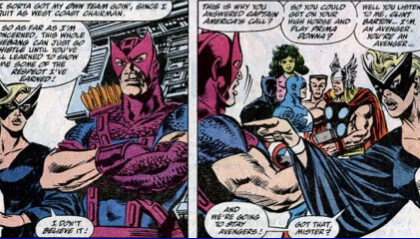 And despite seeming to have softened a bit in a recent Avengers Spotlight arc (also written by John Byrne), Hawkeye still proves himself the arrogant dipshit and Mockingbird still argues with him like she thinks her opinion will matter to him.

Despite Cap’s rhetoric, at the end of the big meeting it appears that those who choose to stay on the island will continue to be active Avengers and the rest all go their separate ways to await being called.  So, for all that effort, the concept of continued membership won’t change the roster from day to day.  At the end of the meeting, the lineup is changed to Captain America, She-Hulk, Gilgamesh the Eternal, Thor, and Quasar.  That’s a ridiculously powerful lineup, with Captain America being the least powerful but, one hopes, the best strategic leader. 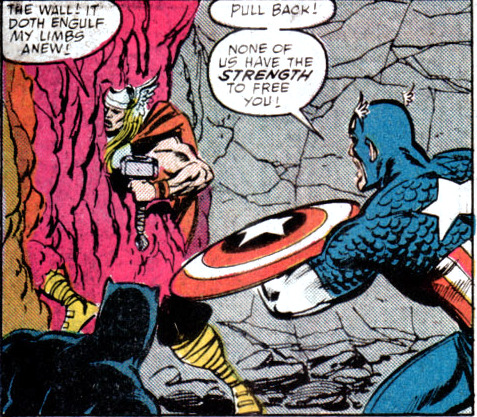 The new lineup is then tested when The Lava Men attack Avengers Island from below.

And just so the whole “group appearance” thing wasn’t a tease, many of the other “members” quickly return to help out.

This is odd because…The Lava Men?  This is the most powerful Avengers lineup possibly ever, and they need massive help?

The story then turns into a big Lava Men fight.  Gilgamesh gets critically injured, and Sersi takes him back to the Eternals’ land of Olympia—so he’s off the team.

Only no sooner does he get there than Olympia is snatched up by The Negative Zone.

And that tale picks up next issue. 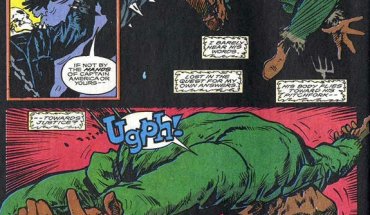