Home
Earth's Mightiest
X-MEN #12-13: The Origin of Professor X and the First Appearance of Juggernaut! (1965) I was really surprised I hadn’t read these issues before!  In these two issues, we meet Juggernaut, Cain Marko, for the first time, and we see Charles Xavier’s childhood.  Issue #12 is a great issue—we don’t see Juggy until the very end of the issue, in the panel above.  Instead, we get a something-wicked-this-way-comes story with an almost horror vibe.  The team are in the mansion, fortified, and they watch as a dark figure keeps looming forward, breaking through each area of security…

Stan Lee didn’t usually borrow much from the horror genre–but Jack Kirby had done quite a few horror and sci fi books by this point in his career, so I suspect Kirby had a lot to do with the storyline and pacing on this issue.

We also get some classic Lee/Kirby teen angst: As a boy, Professor X’s father died and he went to live with the Markos, where Cain was a bully…

That’s classic Kirby, drawing the classic face-slap trick.  Incidentally, Jack Kirby hung with it for eleven issues, but he’s now doing just layouts.  For this issue, Alex Toth did the finished pencils, but it would be different bullpen artists here on out.  I’m still considering this part of the Stan-and-Jack run, but Jack’s artistic influence is less present. 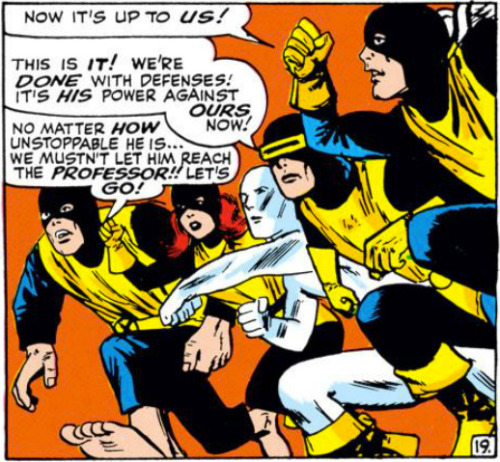 Then, in issue #13, the team takes on Juggernaut.

And he creams them.

Until the team finally gets smart:

His helmet stops Professor X from simply mindblasting him, so the team rips it off… 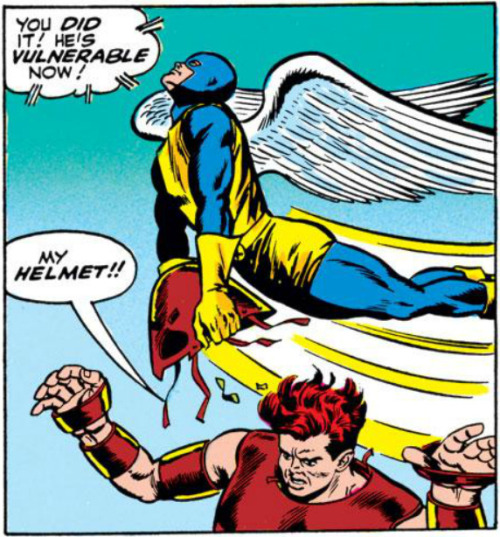 Then Professor X zaps the enemy. 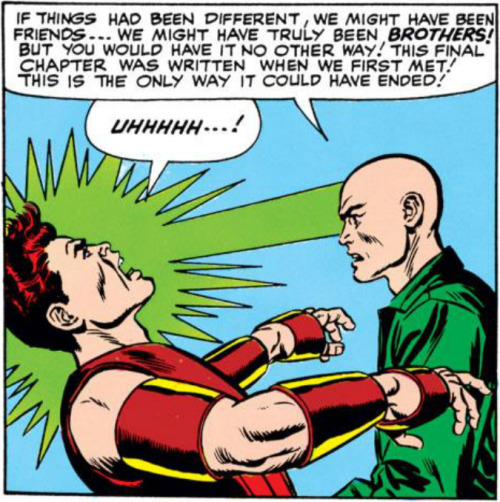 Guest starring was Johnny Storm, and Professor X mind-erases him so he won’t know about The X-Men. 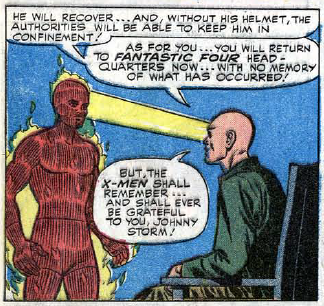 This kind of mind-altering could have been an every day thing. I’m not sure why Xavier thought it was OK to do it in this issue, but not every issue.

In the end, all but Jean are wounded, so we get a little sexist closing panel: 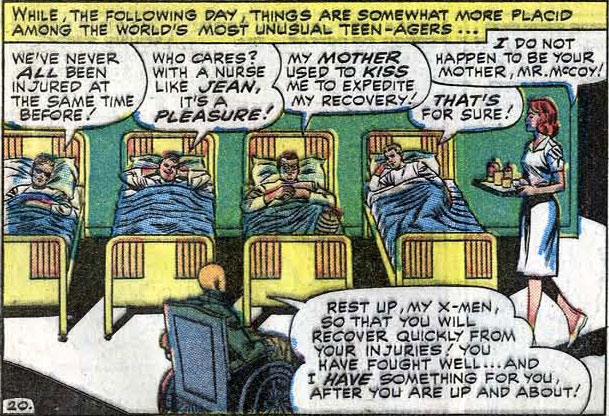 Also: The news is out.  Mutants are a menace!