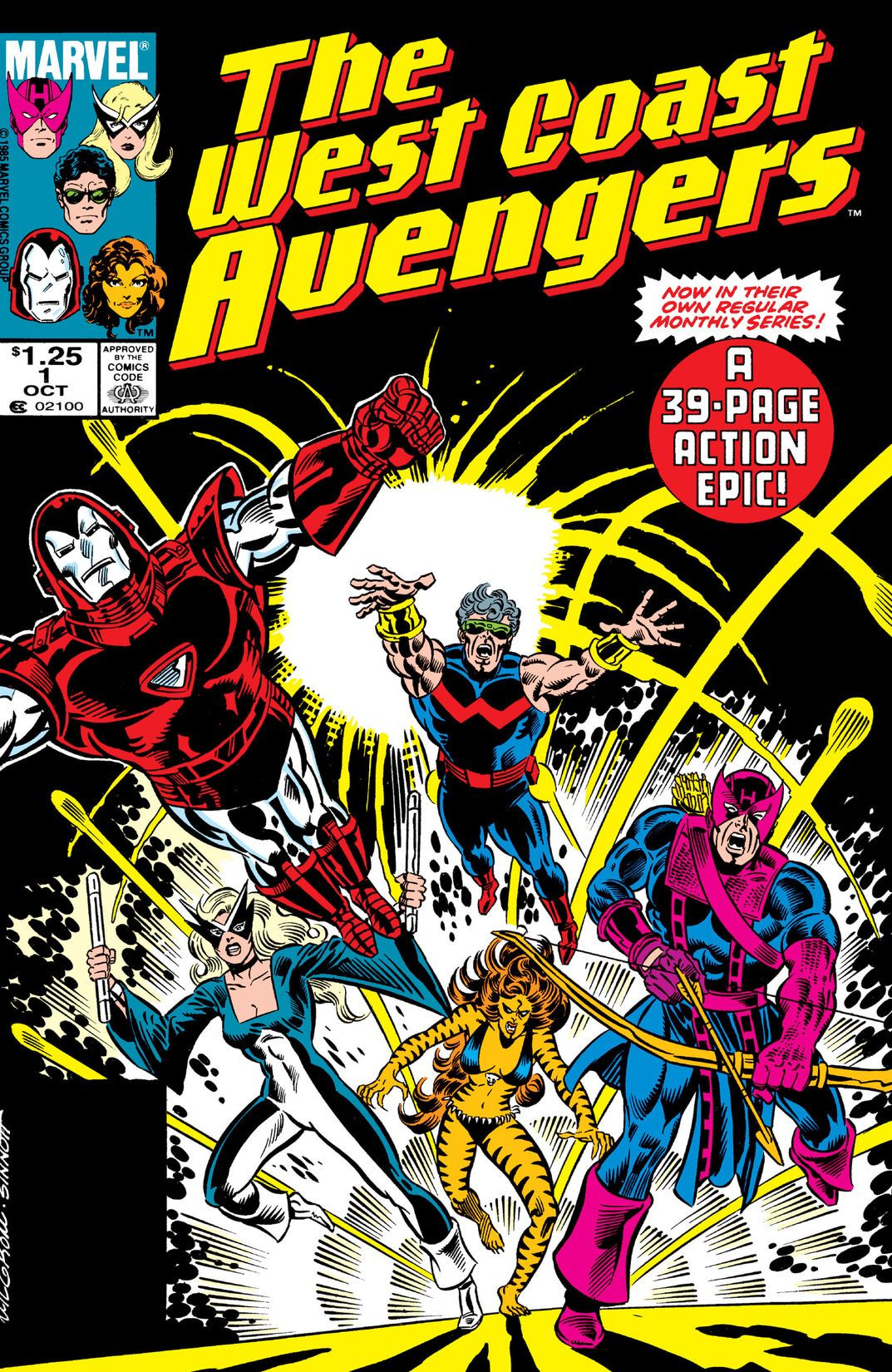 But I do like how Al handled all of Hank Pym’s past identities on the splash page.  Nicely done. With a team book issue #1, everyone expects team formation.  But this first issue—priced at a whopping $1.25 and double-sized—can’t be a “team formation” issue because the team has already formed in the prior mini and, since then, has been regularly appearing in issues of Iron Man, Avengers, and Captain America.  So, instead, Englehart adds Pym to the group.  It’s a good move.

And of course, where there’s Hank, there’s probably… Ultron-12 is their first villain.

Wasp offers to send some of her team to L.A. to help, and Hawkeye is a dick and a baby about it.

I get that this is consistent with Hawkeye‘s prideful character, but this is Ultron we’re talking about.  Most Avengers teams take multiple issues to defeat him. 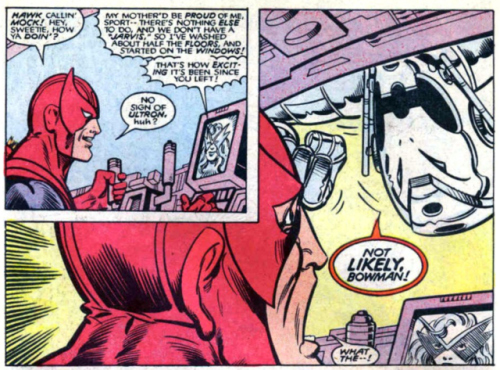 Also, for no good reason, Man-Ape shows up. Tigra is beating the crap out of him until Ultron-12 joins the battle and knocks her out.  Also, Eric “Power Man/Goliath” Josten is involved.  Also Nekra.

This odd collection of villains captures Wonder Man and Hank Pym, and then joins up with Grim Reaper (who used to lead the Lethal Legion, with Josten and Man Ape), and we ride into the also double-sized first issue of Vision and the Scarlet Witch, which is billed on the cover as a 12-issue limited series.  The books is also written by Englehart and also drawn by an inferior artist.  Why did Marvel put so much oomph behind launching these oversized books and then not put a quality artist on either of them?

It starts with Vision being held at Project Pegasus by National Security Advisor Henry Peter Gyrich, who is all upset about Vision’s recent takeover of NORAD in the pages of The Avengers.

Gyrich is portrayed as a bit of a tool, but you can’t blame him for this one.  Vision was a total dick when he tried to take over all the computers in the world.  Anyway, Scarlet Witch busts her husband out of Pegasus—which is also weird because, hey, wouldn’t that be considered treason?  I do like how she gives Gyrich the “finger” though. From there, the couple go back to their New Jersey home, which they bought in their first miniseries, and encounter zombies and the villains Black Talon and Nekra.  Nobody cares about them, and by now you’re thinking, “Hey!  When I finished reading West Coast Avengers #1 they said the story would be continued here!  WTF?!?”

Well, it turns out that Nekra is dating Grim Reaper.  Yeah.  The only person who would do something this weird is Steve Englehart.  Or his spiritual parent, Steve Gerber. Quite a sexualized panel, eh?

So that’s when all starts to tie together, and they find, at Grim Reaper’s hideout, Simon Williams’ human body—the one his soul was in before it became pure energy and was put inside the synthezoid body that is now Wonder Man.  See, Williams was dead, but Reaper’s got Nekra and Talon to animate dead bodies now.

The story then continues and wraps in issues #2 of both series.  As you can see from the cast of characters so far, there’s lots of Avengers lore and history here—some of it from Englehart’s own work on that book in the 1970s.  In the course of the story, we meet Simon Williams’ actual mother—who is Vision’s mother, too, since his brain was patterned on Simon’s—share the same brain patterns.  So yeah, there’s a visit to mommy.

(And Grim Reaper is Simon’s brother, too—don’t forget—so this is a big soap opera.)  Then there’s this: 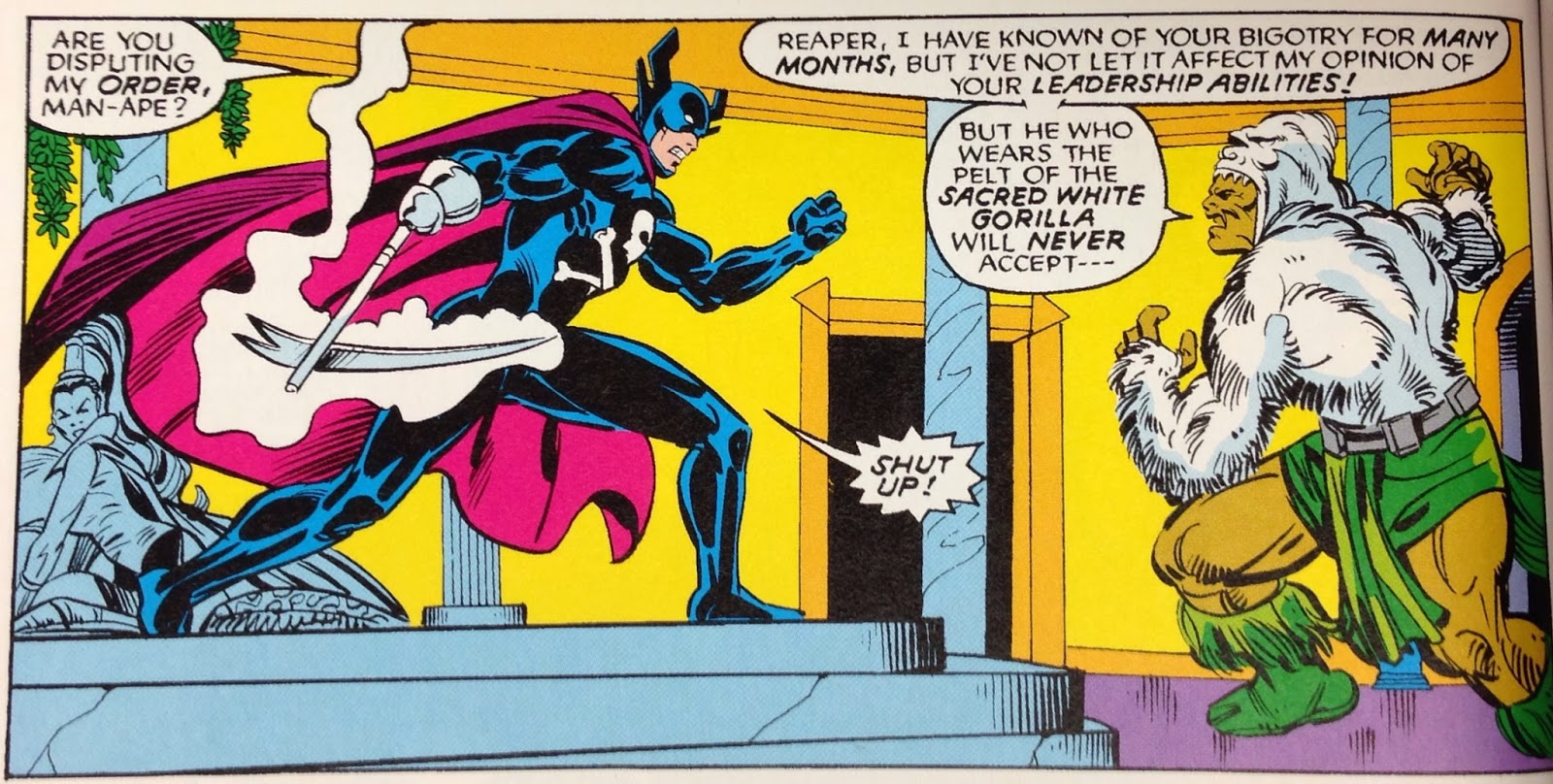 It’s very odd to see this kind of racism story being played out—but even odder that to establish Grim Reaper as a bigot, Englehart uses the word “spades” when recently both X-Men and Fantastic Four used the N-word.  That’s a much better way to show how much a guy hates black people, isn’t it?  Still, I admire Englehart for adding this twist to the story—it’s unnecessary, but it does serve as character development for the villain.

The story ends with a big fight, and Grim Reaper seems to fall to his death in an underground cavern.

It’s a good way to keep a lot of that 1970s mythology alive, particularly important in the 1980s when trade paperbacks and digital reprints weren’t a thing.  If you wanted to read old Avengers stories, you had to go digging through mylar bags and spend $5-$10 per issue.

So, overall, a pretty good story—but very heavy on history.