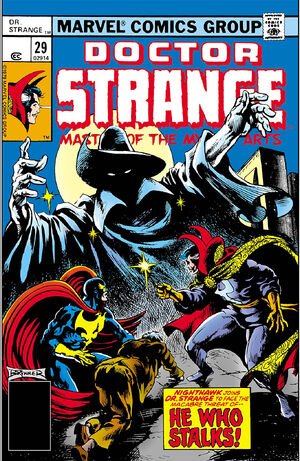 Nighthawk and Dr. Strange fight the villain Death-Stalker (from Daredevil), who is stuck in limbo. But the issue starts with Stephen and Clea getting romantic and clearly about to have a roll in the hay, when they’re interrupted by a call from Hank Pym who wants to tell them that Black Knight–who is stuck as a stone statue–has been stolen.  After that issue is settled, Strange and Clea get close again, and that’s when Nighthawk shows up.  It’s some humor, and it’s well done, in a book that’s usually devoid of good character moments.