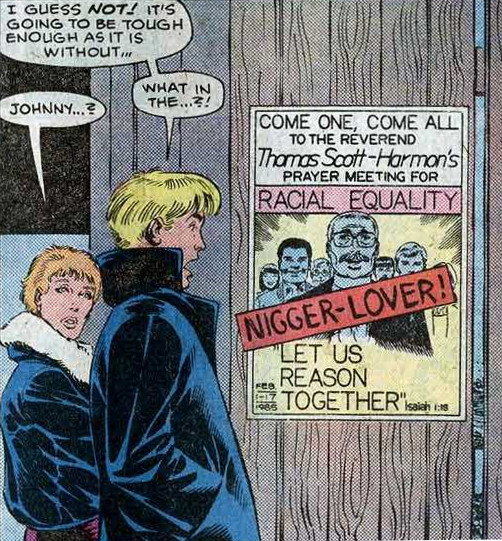 In the issues leading to this we saw Psycho Master provoking citizens of New York City into becoming racists.  Arguably, this ties into X-Men, where Kitty used the N word in an argument with an anti-mutant protester—both stories take place in New York—but the connection isn’t noted by editorial.  These are also the only times I’m aware of where Marvel printed the N word, so the connection seems non-random. 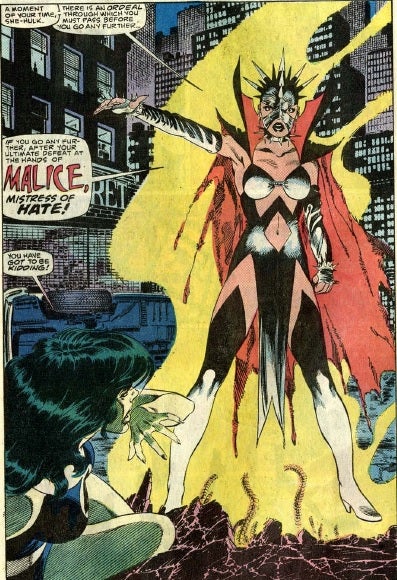 Anyhow, Susan Richards falls prey to Psycho Man’s hate and becomes Malice.  In the form of that character she uses her powers in much different ways than we have seen before. Byrne’s run is notable the way it made new in creative uses of Susan. 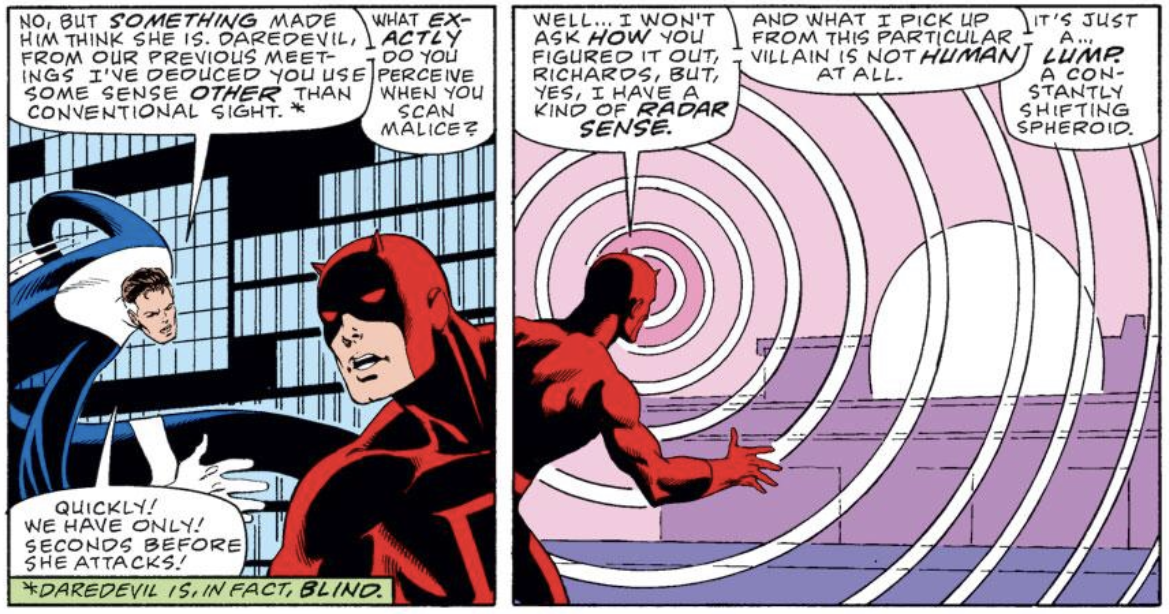 We get a nice and brief Daredevil appearance that isn’t necessary but it’s cool.   He also takes a blow to the face… 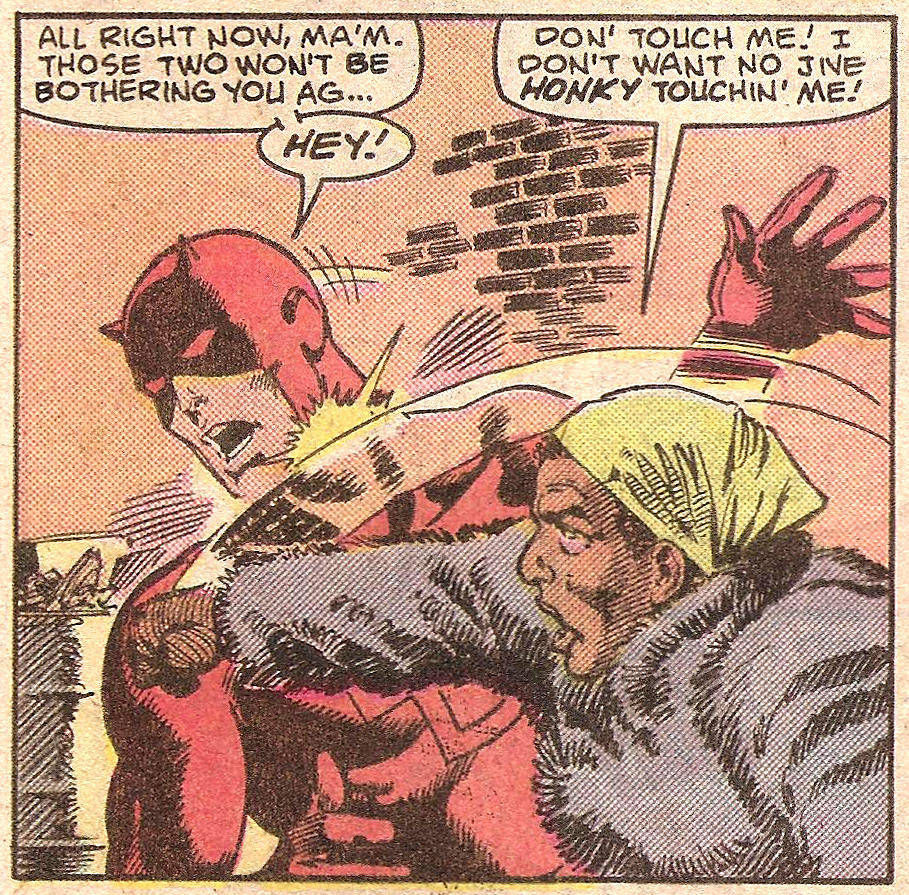 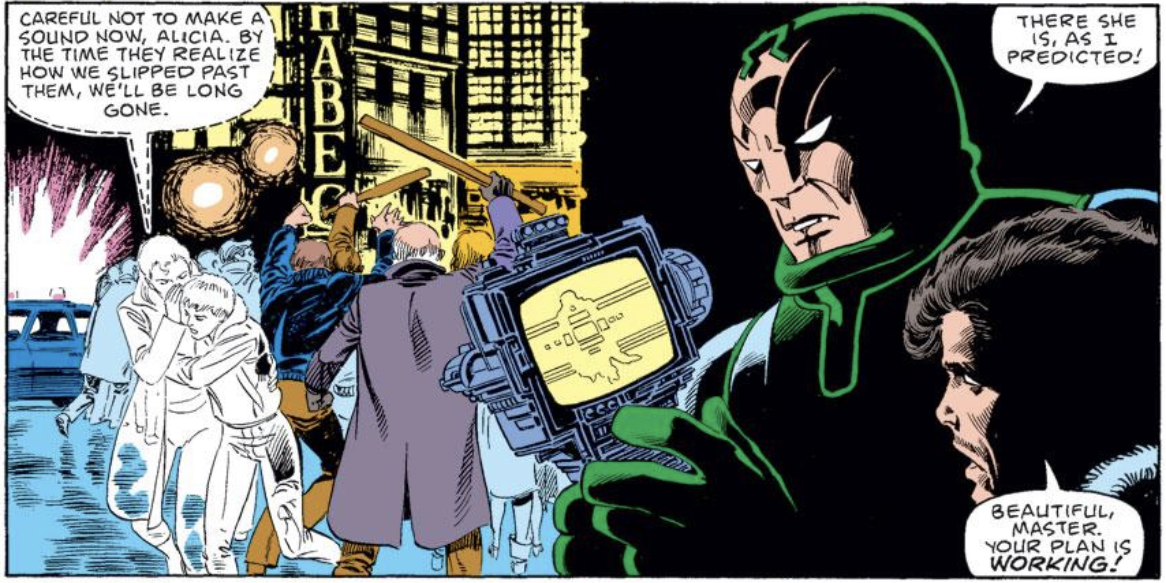 Psycho Man is pumping up hate for a new Hate Monger, but of course the FF eventually save the day.   Reed snaps Sue out of her trance by slapping her.

After freeing Susan from the hate-thrall, she is angry and wants revenge so the team drinks down to the microverse and takes out Psycho Man.

It’s cool to see another trip to the Microverse.

While they are there, we get to see Psycho Man turn She Hulk into scaredy putty.  That’s kind of funny.

This arc recalls the first Negative Zone arc, where Byrne took the team to several different worlds and through various adventures.

Even though they win, Susan Richards isl deeply affected by being overcome by hate–the book had extended sequences showing her psychological trauma.  Part of it involved her parents, and by the end Sue wants a full break from her past, so this is the one where she changes  her codename to Invisible Woman.

We get an extended sequence where, in one of these dreams, he meets Power Pack for the first time. It’s tempting to say this isn’t the real Pack, but for a group of kids Franklin never met, they sure act like the characters normally do.

And if all of that wasn’t enough to unpack, Secret Wars II #2 is published between issues #281 and 282, in which Beyonder watched the battle between Malice and the rest of the F4.  #282 says it is a SWII tie-in, but thankfully that doesn’t take away from the complexity and richness of these issues.  There’s a little obligatory exposition and discussion of The Beyonder, but it really wasn’t all that important.  Mostly, Byrne just gave it a little lip service.  Helping move product.  By this time, the FF was one of Marvel’s top sellers, and there are several references to other books in these issues.

In particular, Franklin has another precog dream: This time about Power Pack. The team’s book had recently launched, and didn’t really catch on the way it should have, so I can appreciate Byrne’s cross-marketing here.