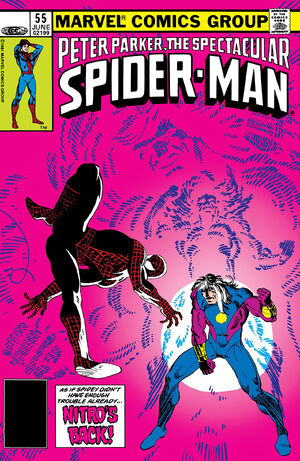 Nitro has a lawyer who gets him released from Project Pegasus.  Habeas Corpus!  Seriously, though–Project Pegasus surely violates the 4th and 8th Amendments, among other things, by keeping supercriminals in custody without trial and experimenting on them.

So Nitro gets out and blows up the Project.  Or at least a few of its doctors.  He’s a villain who gets to have a body count—just one reason I really like him.

Nitro’s power is to blow up, turn into gas, and then reform and do it again.  Spider-Man stops him by inserting nausea gas into his “cloud” while he’s reforming, which makes him so sick he can’t explode again.

Very creative.  Roger Stern was great at thinking of these outside-the-box ways to defeat enemies.  Very thoughtful and creative guy.