We start by reestablishing how awful Kingpin is, when he drops a boulder on his business manager’s head. 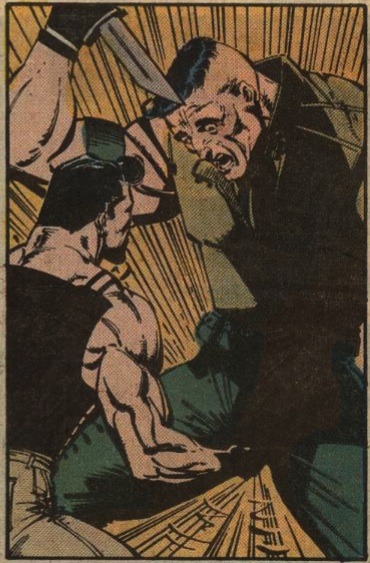 From there, it’s a four-issue saga where Punisher and Kingpin go head to head.  No pun intended.

Storywise, the beats don’t matter a lot, but they’re good.  Kingpin is sick of Frank Castle killing his operatives, so he attacks Punisher’s base.

Microchip has a defense robot to protect Pun’s hideout. We get to see that Microchip is actually a pretty handy dude to have around, as his established defenses foil Kingpin’s men from getting inside.  From there, Punisher decides the best defense is a good offense, and if Kingpin wants to come right at him, then he’ll go right at Kingpin.

Punisher recruits some of the people he’s helped over the last year of stories to help form his own little army, and the groups go at it.  One interesting element of the war is that Microchip puts a virus into Kingpin’s data software to mess with his money management—a nice touch of detail from author Mike Baron, who is doing a very good job at writing this vigilante series.

Also, Kingpin has basically unlimited resources compared to Punisher, so he builds a “Battle Bus” to take on Punisher’s Battle Van.  Car chases are hard to do in comics, but Portacio and Williams do a great job on this scene, which stretches across eleven pages and two issues.

And there’s a rare moment where Punisher has sex with the woman who has joined his mini-army, and then acts like a macho dickwad right afterwards, until he concedes that he likes her…

He’s afraid liking her will get her killed.  And, of course, it does. 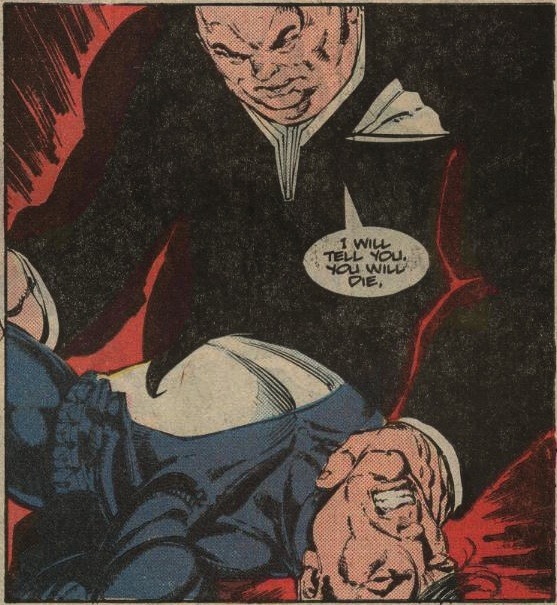 Then the ultimate showdown happens, and it’s cut short.  Kingpin fairly easily bests Punisher in one-on-one combat, but Pun’s army show up with guns and force Kingpin to let him go.

It’s a bit anticlimactic, but this is Marvel we’re talking about.  You didn’t honestly expect either Punisher or Kingpin to die, did you?

These are strong issues but to me they represent a real lost opportunity.  These are the January to April 1989 comics, which is exactly when Inferno was taking over New York City, and neither this book nor Punisher’s War Journal companion series make any reference to the event.  Although there is a strange cameo by some of the X-Men (above), but they don’t say anything or have any interaction with the story whatsoever.

Seems to me an Inferno tie-in would have been a great way to have some fun with the character and stay true to his nature if he went around killing schoolbuses and mailboxes that were animated by the Inferno magic.