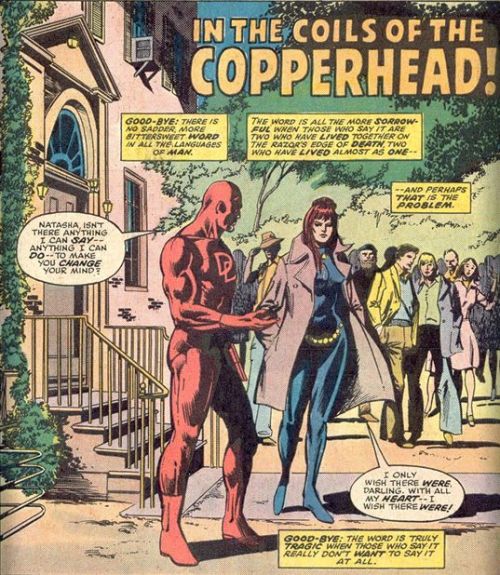 With #124, Len Wein–Marvel’s rising star editor at the time–and his best friend Marv Wolfman took over and Gene Colan came back.  But the real star was Klaus Janson, who took over the inking chores and would become the master behind the artists of Daredevil–including Frank Miller. Marv Wolfman takes over as author, literally halfway through #124.  He’s an important DD creator because he created Bullseye.  Marv Wolfman’s run was a slow build, but eventually he produced a series of comics that foreshadowed much of where Miller would take the title.

Len Wein’s half-issue run includes a sweet conversation between DD and Black Widow.  It’s pretty decompressed, spreading over two pages, and allows us to see Daredevil expressing vulnerability and Widow showing her independence and unwillingness to be second banana to anyone.  Nice character work Len.  Too bad you’re leaving.

Wolfman then turns in a story about a killer named Copperhead who leaves pennies under the eyes of his victims.  Also, his head is made of copper (and they directly reference that this is a take-off of Doc Savage, Man of Bronze, who is the subject of a Marvel black and white magazine at the time).  Also, since he’s called Copperhead, he talkssss with pronounced essessssss…..

Creators: Len Wein and Gene Colan (half of #124) Marv Wolfman and Bob Brown (the rest)