Daredevil #260 ended with a chilling drop.  Unlike Daredevil and Bullseye, Typoid Mary clearly drops DD.  The next two pages of long panels show his fall, through the trees, into an abandoned railway yard under Hell’s Kitchen.  Of course it’s a metaphor.  But in comics, it’s also a literal descent. 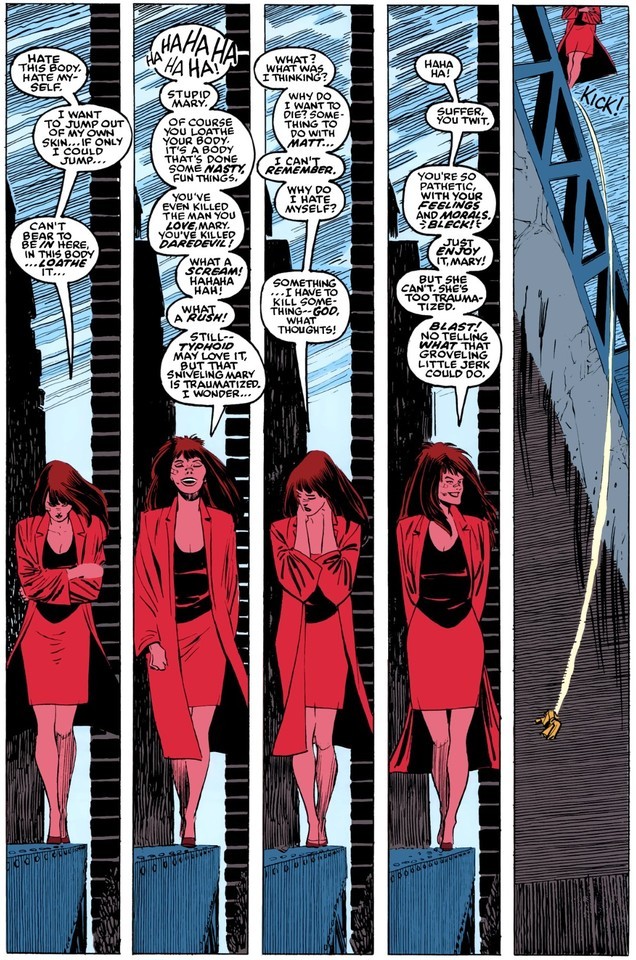 Because of the events of Inferno, Hell’s Kitchen becomes hell itself. I love this panel, in which a police captain explains how crazy it’s all gotten.

Ann Nocenti does a good job at folding in what was likely an editorial mandate to tie Daredevil into Inferno.  When we last saw DD, he was left for dead by Typhoid Mary.  As a result of the Inferno events, an animated vacuum cleaner finds and molests him.  People make fun of this issue as the one where Daredevil fights a vacuum, but to be fair, he also fights a subway train later on.  And wins.

Typhoid Mary thrives during the demonic chaos, while Kingpin… Meanwhile Black Widow saves some of the Hells Kitchen kids from a demon elevator.

Eventually, Matt’s broken body is found he’s in the hospital on life support.  Karen’s by his side, as is the “good” side of Typhoid Mary.  It’s where they meet for the first time, and it’s where Karen finds out Matt was having an affair…. And so begins Karen’s descent.  Hell’s Kitchen being Hell now, this is what happens to her: