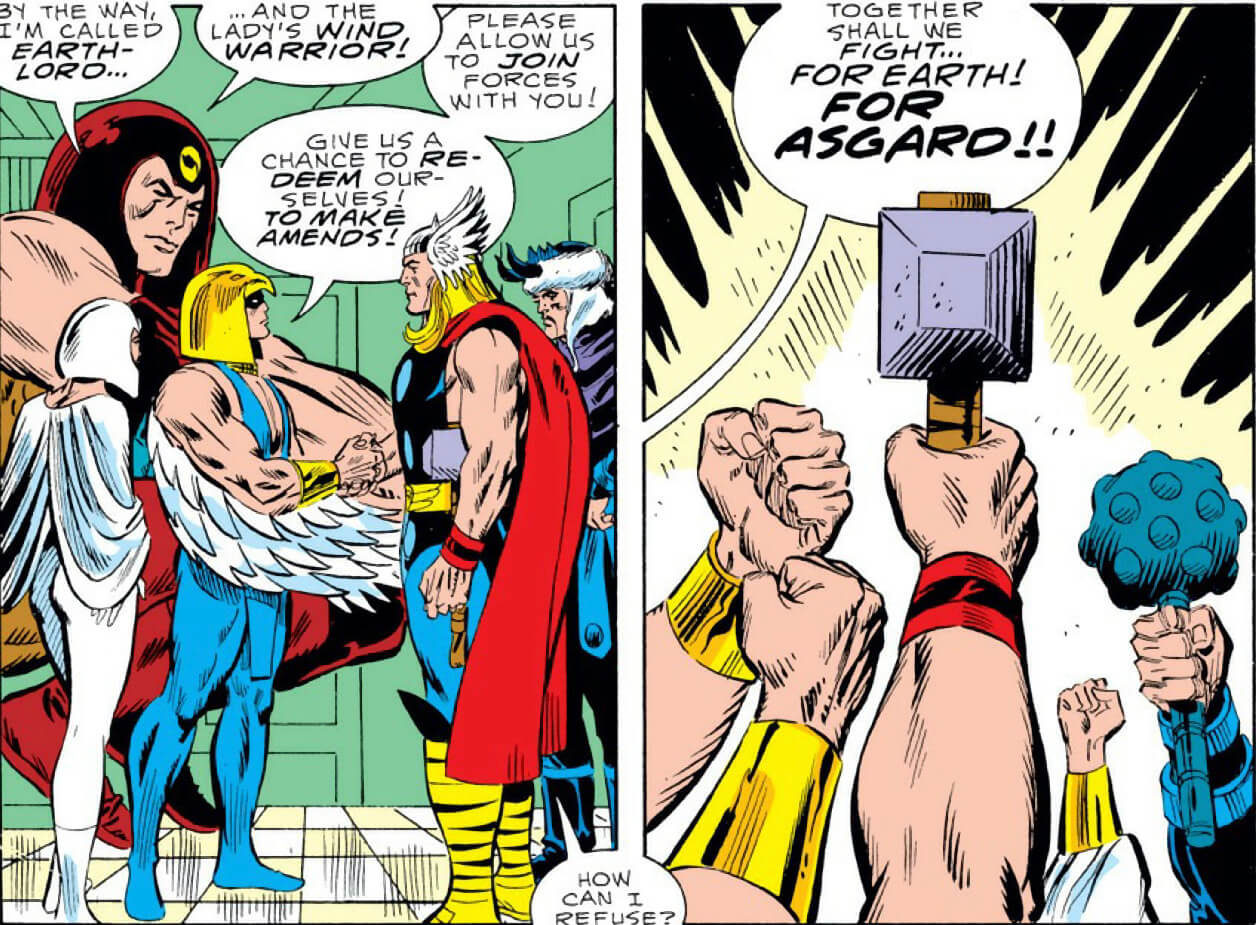 While just about everyone else in the Marvel Universe was being affected by the Inferno event, Thor was busy restoring Asgard.  He starts by teaming with the four humans mutated into elemental heroes by the Egyptian God Seth (who are now officially branded as Earth Force), adds The Black Knight to his band, and then decides to take the battle to Seth himself–since the Rainbow Bridge has been destroyed and he can’t get to Asgard, but Seth has a way there since he keeps trying to invade. 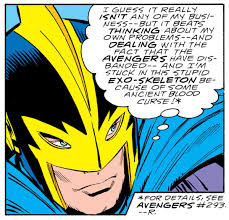 Lots of big fighting and “for Asgard” screaming.  Exactly the kind of stuff that makes for great Thor books.

And of course, where there’s a big Thor epic, there has to be… 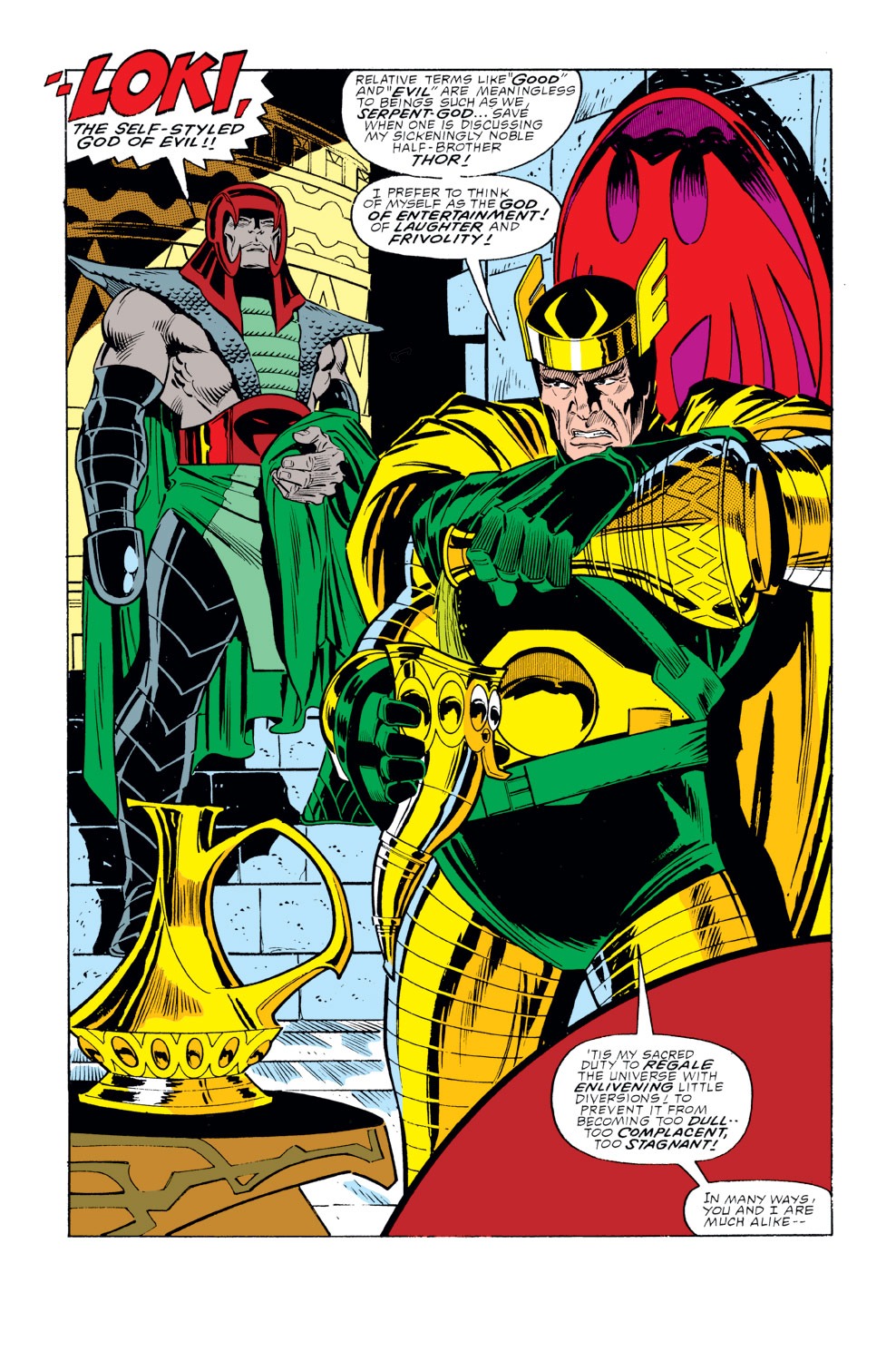 Loki.  Seth and Loki have a brief exchange during which Seth reveals that his goal is to render Asgardians mortal by destroying The Flame of Life.

Loki decides to see what he can do to help prevent this.  In his astral form, he sees that Thor has been captured and an Egyptian God is able to use Thor’s hammer, Mjolnir.  No explanation is really offered for this.  It may be because of Seth’s God of Luck, who is on the scene, but that’s a bit of a cop-out.

(possible because of Balder’s power drain). Thor and his group force Grog to tell them the source of Seth’s power, and that leads them to the orb. The guy in it turns out to be Bes, God of Luck.

Meanwhile, Seth is engaged in a full-out invasion of Asgard, and Hiemdall is killed.

Enchantress and Lorelei are by his bedside, and Enchantress gets upset.  She joins the fray and Seth captures her.  Then, we see Celtic Gods joining the battle to preserve immortality.

In Seth’s realm, Thor’s band fight through all kinds of demons and then reach a prison where they learn Odin is not dead, but being held captive.

This is all building up to issue #400, which, if this arc wasn’t overstuffed enough, adds Surtur to the mix. 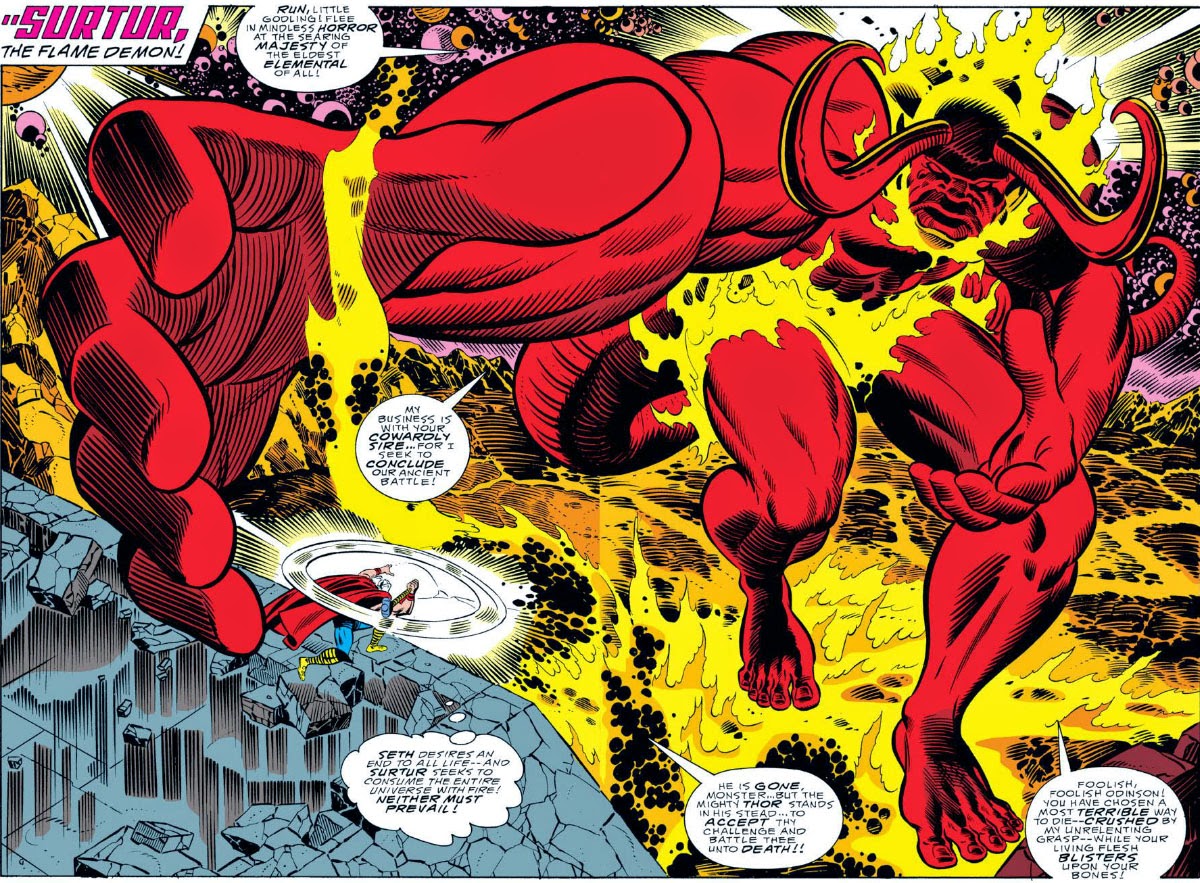 This really wasn’t necessary, but it feels right.  These issues are basically “Thor’s greatest hits,” an attempt to bring in all the big elements of the days of Jack and Stan’s initial run creating the character.  All of the Gods, including Heimdall, are restored to their original roles, Odin is king again, Surtur and Seth are stopped, and all is right with the land of Asgard.

Except for with Black Knight.  During the battle, he is completely paralyzed—like a stone statue again—and Thor goes back to Earth to help cure him.

This leads Odin to (once again) tell Thor that someday he’ll have to choose between Midgard and Asgard—yet another Lee/Kirby element. 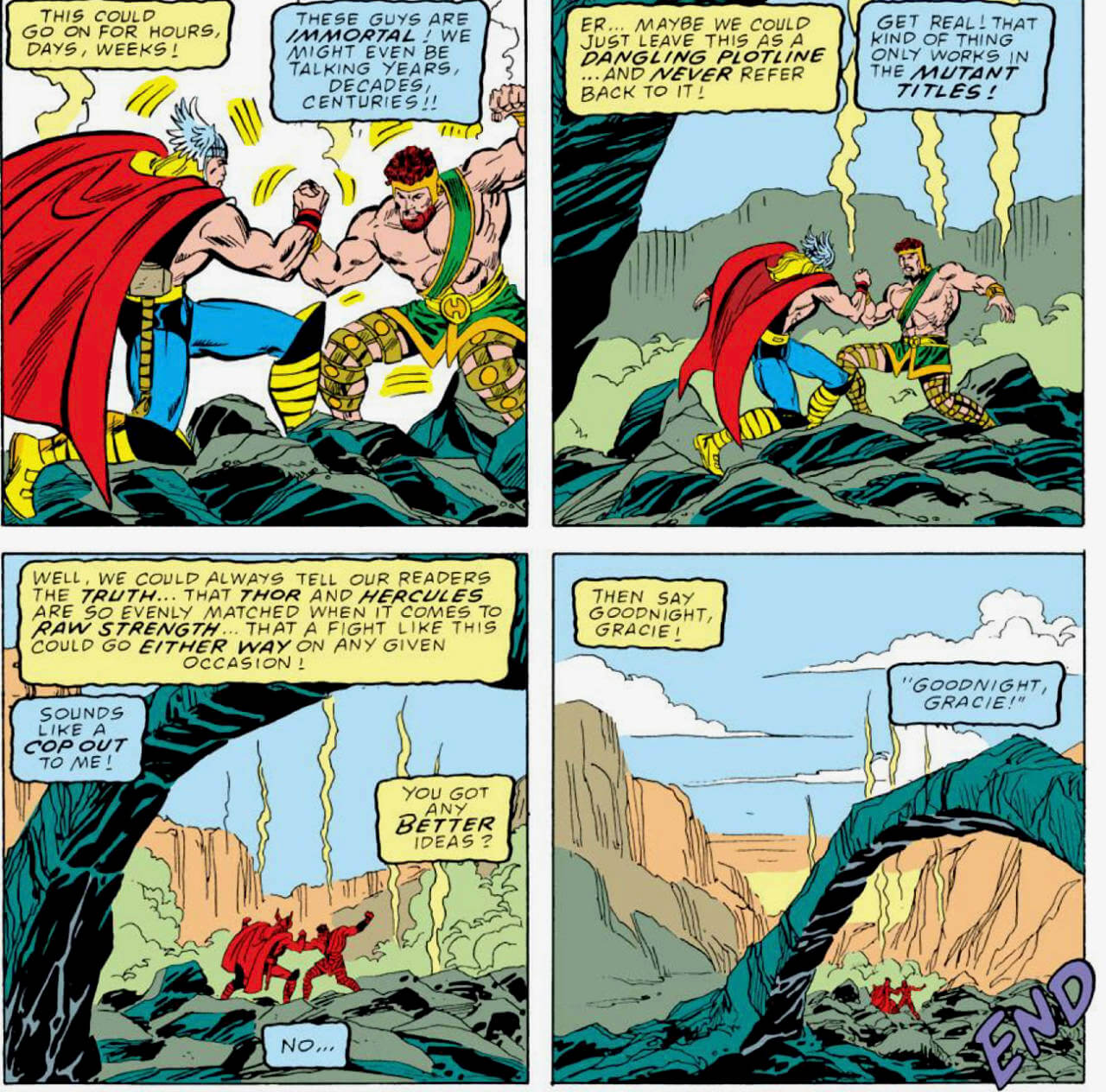 There’s a bunch of back-up features, one of which is pretty funny: Thor and Hercules are locked in a permanent arm wrestle, and writer Tom DeFalco takes a shot at Chris Claremont’s tendency to introduce conflict but not resolve it for dozens of issues. 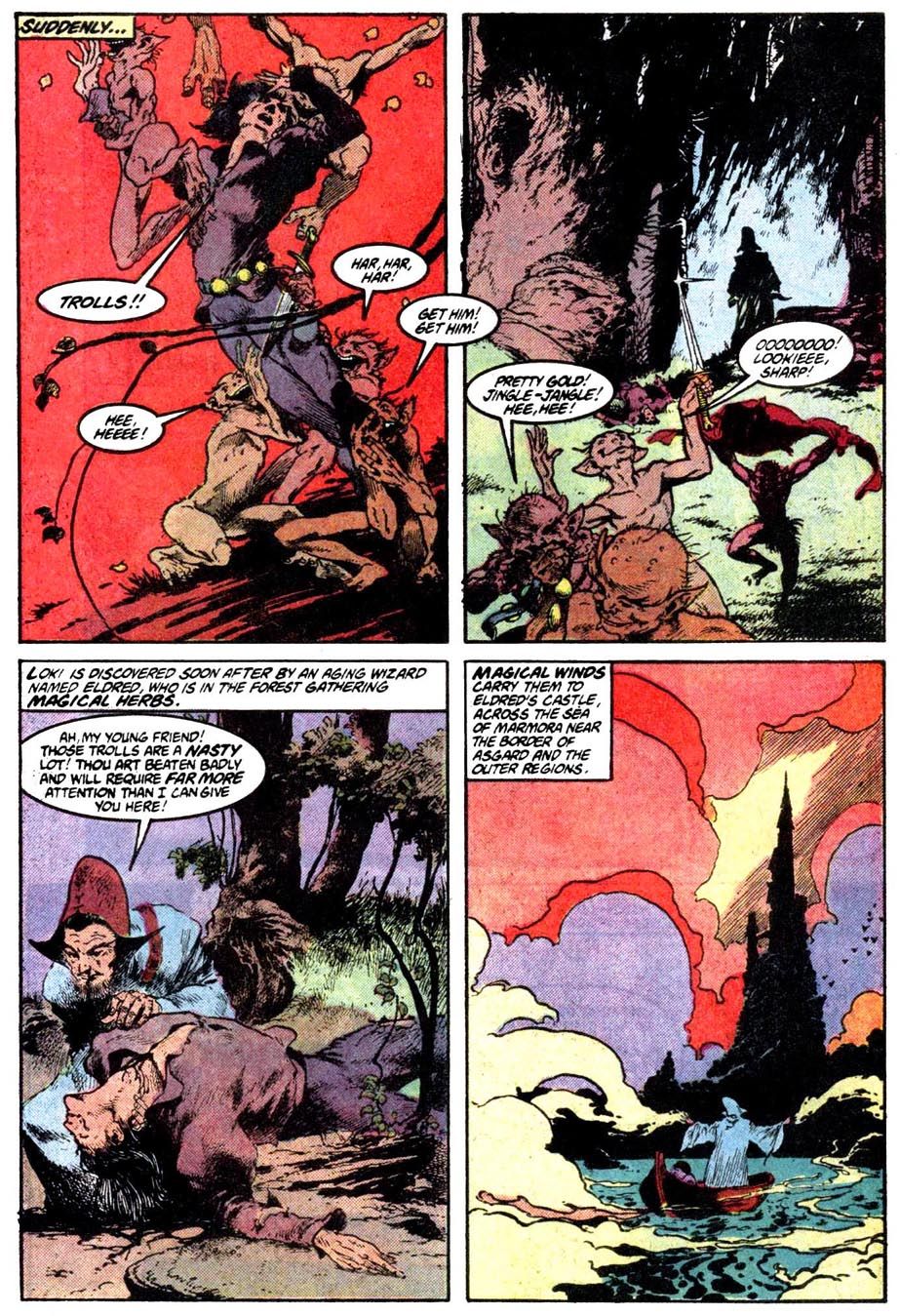 And a beautifully drawn young Loki tale by Charles Vess. 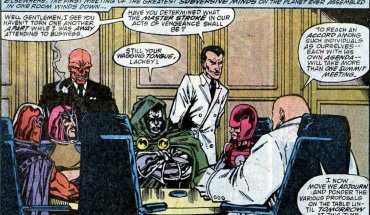