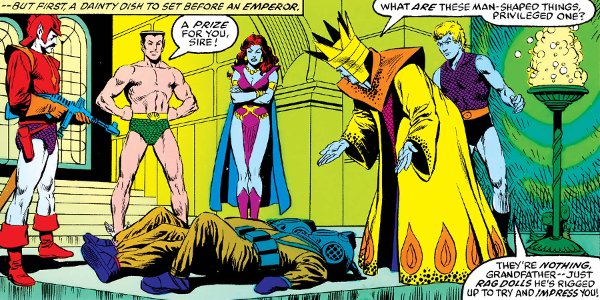 This issue is about teen Subby, and shows him meeting humans for the first time, as he kills a deep sea diver and brings him to the king of Atlantis.  The King calls him “Oh Privileged One.”  That’s odd.  They happened upon the divers while playing the Atlantis version of cowboys and indians…

Namor reveals that he thought it was a robot and didn’t mean to kill him, but the rest of Atlantis seems to know about “Americans” and the damage they cause to the sea.  Which is odd, because in the panel above the King seems to know nothing.

Namor, egged on by his Atlantean colleagues, goes to the surface world and wreaks some havok.  In the course of it, he saves a hot British woman who gets him to attack a Nazi U-Boat.

After which, Namor leaves her and returns to his girlfriend Lady Dorma.

We learn, by the end of #3, that the British woman was a “sex ploy” by the Brits to capture Sub-Mariner.  Since it didn’t work… …They’ll be attacking him with the original Human torch next issue.

Also, it’s confirmed that despite their small size, Namor’s ankle wings are what enable him to fly.

Creators: Roy and Dann Thomas, Rick Buckler
Grade: C+.  Decent, albeit dated, writing, and a well-paced story make this an above average comic.  If you compared it to other Sub-Mariner books, this would be a solid B, since the quality of Namor’s books is usually pretty inferior.