Note carefully, because I’ll probably never say this again: This Sub-Mariner comic should have been a lot longer.  True, it’s still really silly and it’s not written well, but there’s a lot of potential here for old-fashioned comic book craziness.  In fact, this is more of a 1960s book than an early 1970s one.  Around this time, Marvel is getting into horror in a major way, and it’s starting to produce a lot of complicated (convoluted) stories and characters-embracing the offbeat.  Namor is just a guy who goes to war with the surface world once a year.

This time, he leads Atlantis to invade New York with giant flying fish and other seamonsters, but the friendly, panicked soldier to the right is careful to point out that nobody’s been hurt.  And it stays that way until Sub-Mariner’s rival, Lorvex, decides he wants to flatten Manhattan, at which point Namor steps in and calms it all down.  Apparently, this is what passes for kingly behavior in Atlantis… During the whole book, we get lots of shots of civilians running for their lives, but not a single superhero steps in to help. 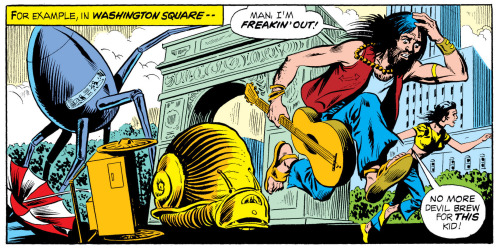