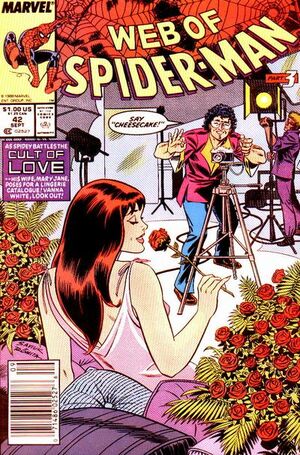 Peter David returns to Spidey for several issues.  After this arc, he’ll cross this book over with Hulk, where he is doing the second-best work of his illustrious career (the best being his reboot of X-Factor, which is coming several years from now).

This arc is a strange story about a cult that appears to have kidnapped Betty Brant, who is now dating Flash Thompson.  So Flash is looking for Betty.  Daily Bugle reporter Ben Urich is also investigating the cult.  And, of course, Spidey gets involved.

There’s nothing really “wrong” with this story, it’s just…I dunno.  It feels like this is a “villain” that is way below Spider-Man’s threat level.  It’s a pretty standard cult/brainwashing tale.  And there’s nothing apparently supernatural about the cult, but Spidey consults with Dr. Druid. I do like how he tells Dr. Druid, to his face, that he’s only asking for his help because Dr. Strange wasn’t available and Druid says “you have a strange way of asking” for help.  In Solo Avengers, and here, we see Dr. Druid going on a publicity campaign to up his profile (I’m assuming because he wants to be the leader of The Avengers, in the pages of that book).

The best part of these issues is a subplot about Mary Jane posing nude, and Aunt May disapproving.  Great character work—which is what Peter David is best at.

Actually, that’s not true.  The best part is that even mediocre Peter David is better than most peoples’ scripts. 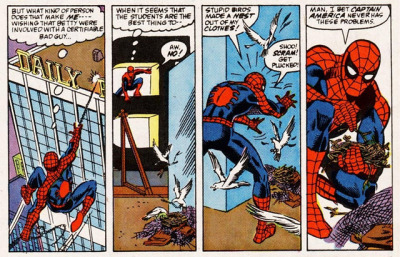