This might be the first time we’ve ever seen Kingpin kiss.  Maybe not.  But it’s certainly rare.   He’s jealous that Matt Murdock is able to get with Mary (in her non-Typhoid personality), so he orders her to speed up the process of breaking Daredevil. But her Mary personality really likes Matt.   So, to accomplish this, she recruits several of the new villains that Ann Nocenti has introduced during her run so far.  Mary’s logic is that she won’t be hurting him, these other villains will.   This is a nice way of tying it all together, and upping the stakes in what so far has been a slow, steady chipping away at Murdock/Daredevil. Meanwhile, Matt is trying to break up with Mary because he doesn’t want to jeopardize the good thing he has going with Karen.  There’s a very well-done sequence in issue #259 where Daredevil and Karen Page break up a child sex ring.  When they save the kids, the terrorized children see them as a devil and a witch, which is an interesting way of showing the unintended consequences of dressing like a devil.  But Karen is able to calm the kids down and rescue them.  We don’t often see a focus on the victims of crime in comics, and in particular sex abuse is a very hard topic to cover.  Nocenti and Romita Jr. do a great job.

Typhoid Mary assembles her team of Bullet, Ammo, the Wildboys, and Bushwacker, and each one gets some time punching Daredevil. 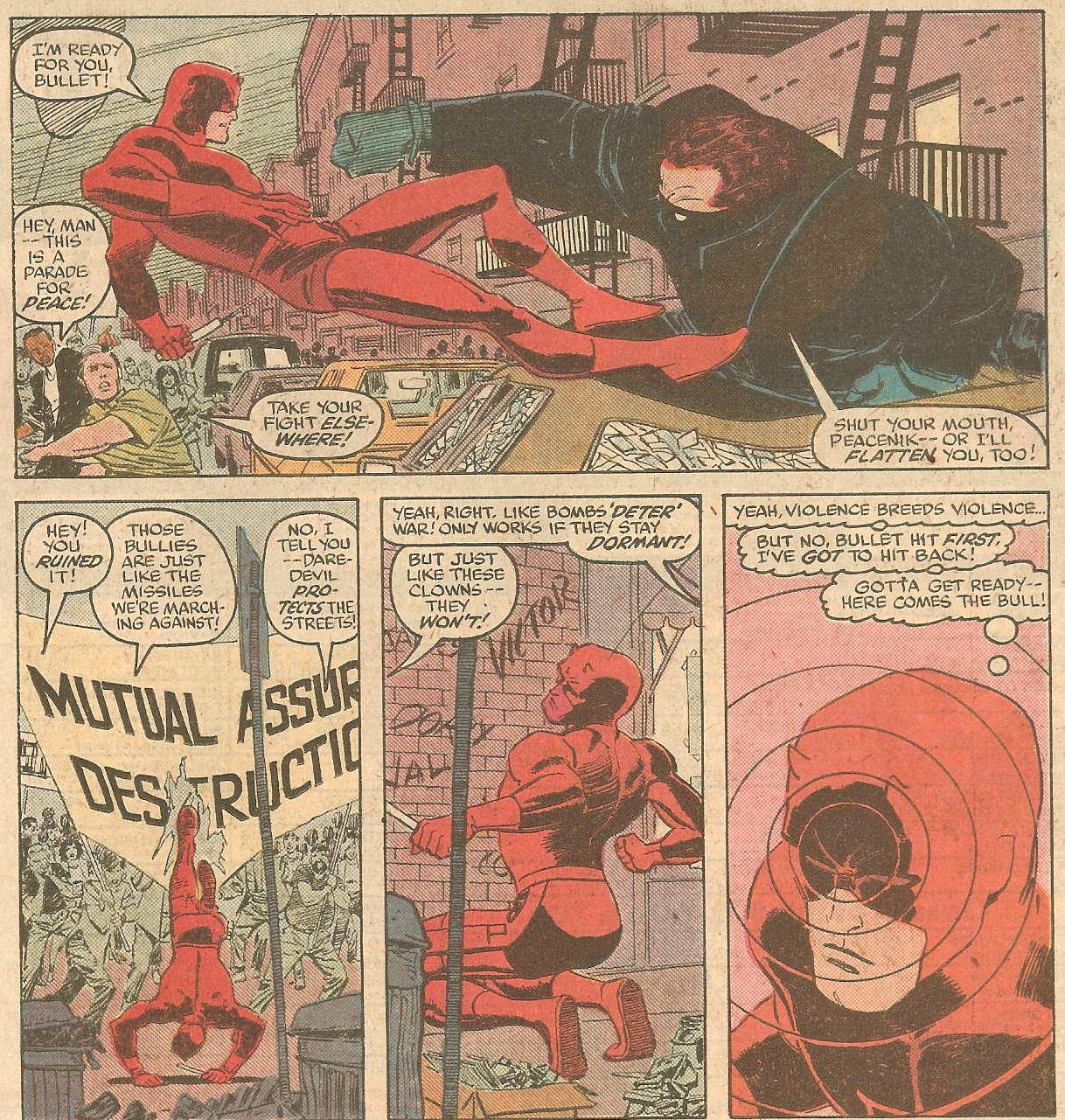 And they each either get a splash page or a spread for their big moves. Bushwacker is still all bandaged up from the last time DD beat him up.

The attacks happen during at a nuclear disarmament parade, by the way.

Daredevil doesn’t have great luck at parades (see issue #178, with Power Man and Iron Fist).  This leads to fears for bystanders, which also puts DD at a disadvantage. 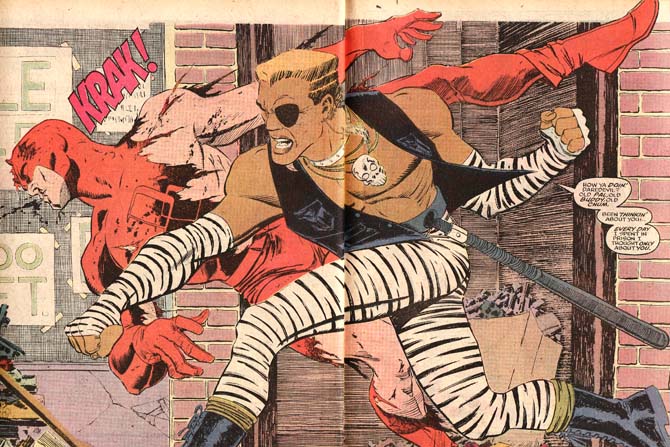 By the time Ammo attacks, DD is already disoriented and his costume is shredded.  I don’t really like the way JR Jr. draws his boot in the above page.  There’s never bene an indication that the top of the boot could sag.  But that’s a minor quibble.  Romita is drawing the hell out of Daredevil (no pun intended). 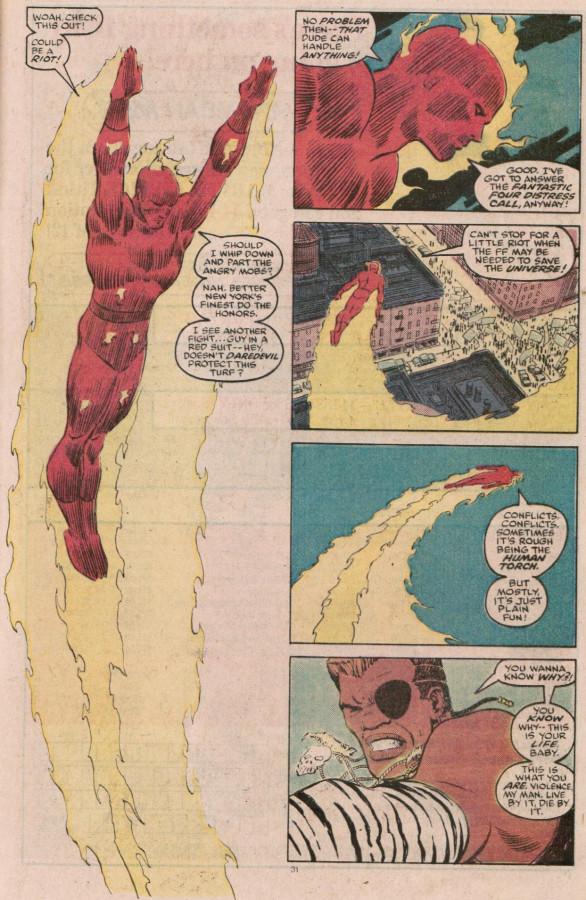 Note: This is Ammo’s final appearance.  He doesn’t die or anything, he’s just never used again.

There’s an odd cameo by Human Torch, who doesn’t stop to help Daredevil.  I’m really not sure why it’s here—it takes us out of the action, and these sequences are great.   Plus, it’s pretty out of character for Torch to not help all the bystanders being terrorized by these attacks.

Daredevil gets weakened through the battles and starts hallucinating images of his dad and past foes like Elektra, Bullseye and Gladiator—which is also a nice way to celebrate the history of the character while introducing a new rogues gallery. 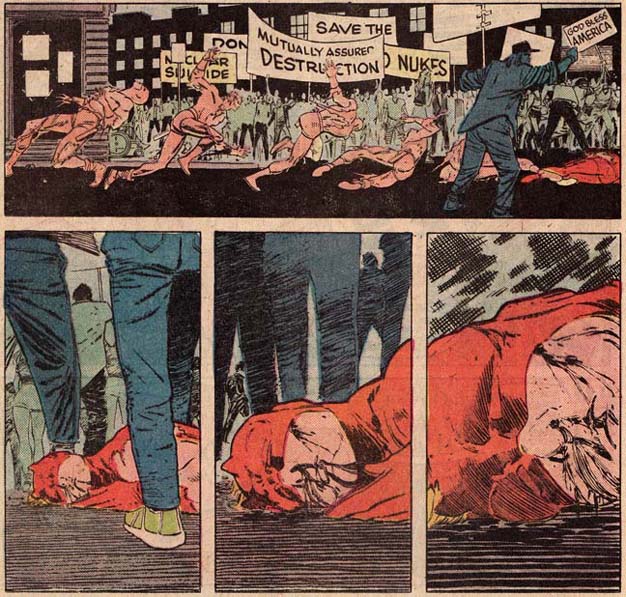 Plus, he gets trampled by the anti-nuke protesters.  Which, of course, is ironic.  Much like Human Torch couldn’t be bothered with an urban riot because the FF signal had gone off, signaling what to him was a global threat, these protesters–against the “big” threat of nukes–can’t stop to help one man dying in the street at their feet.

After the Wildboys get their licks in, it’s Typhoid Mary’s turn.   I should note that issue #260 is double-sized, so there’s lots of space for all of this.

Mary drops him off a bridge.

Which his obviously a great tribute to Bullseye’s destruction in Daredevil #181 LINK , perhaps the best DD issue of all time. 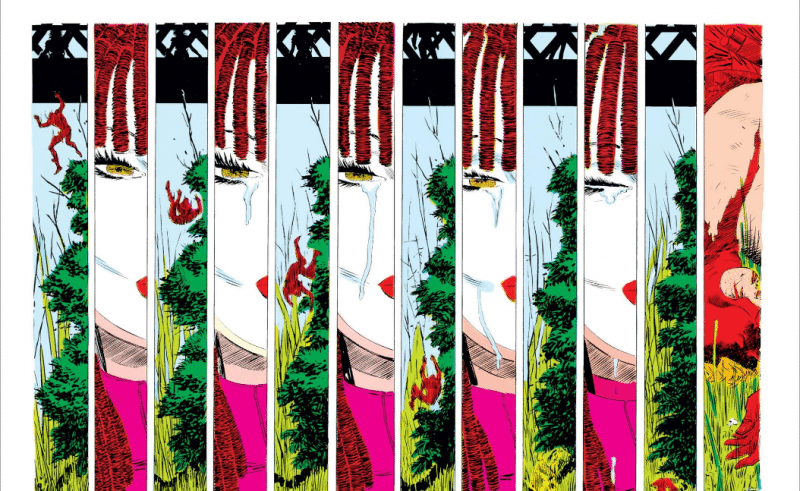 She assumes DD is dead.  Karen Page recruits Johnny Storm (hey! he’s back!) to try to find Daredevil—not knowing he was dropped off a bridge. his leads to an actual laugh-out-loud funny scene of Storm trying to do the Daredevil thing in Josie’s bar.

And there is an exceptionally creepy scene where Kingpin is mad at Mary because he wanted Daredevil broken, not killed.  He beats her up, she threatens to burn him, and then… Like I said, creepy AF.   On the final page of #261, we see Daredevil lying in the grass under the bridge.  Obviously, he’s alive—but he sure doesn’t look it.

Creators: Ann Nocenti, John Romita Jr.
Grade: A+.  The best issues of a run that has been really, really good so far.