Galactus is on the warpath to kill all the Elders for conspiring to kill him, and Silver Surfer and Nova are hunting down Contemplator, who escaped the massacre last issue.

I still don’t fully understand why Surfer is okay with this premeditated murder—it’s clearly no longer in self defense—but his moral compass points strangely so I’ll overlook it.  Part of this hunting mission requires undercover work, and Surfer wrestles with stealing a coat.  But, again, not with killing Elders of the Universe.

Side note: This is the not the first time he’s worn a trenchcoat disguise (above, from 1970’s Silver Surfer #13).  It seems to work for him.

The ongoing second Kree-Skrull war provides for some space battles along the way, along with the first appearance of Reptyl, who has provided amnesty for Contemplator. The cosmic question in these issues is “what does it mean to be human,” hence Reptyl referring to himself as the “non-humanoid” and Contemplator looking like Buddha.

The two spend many panels arguing the question of humanity until Reptyl ends the argument. 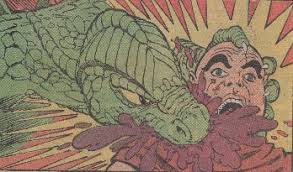 Seems pretty easy to kill an elder….Only it’s not.  This will later be revealed to have been a skrull and not the real contemplator.  But I’m tagging it anyway–because I think when it was written it was intended to be the real guy.

Marshall Rogers’ work on this book has been (pun intended) stellar, so it’s sad to see Joe Staton replacing him for #11.  We’ll see if Steve Englehart’s work continues to be as great as it has been with other artists—his contemporaneous Marvel work has been uneven-to-poor (see: West Coast Avengers).